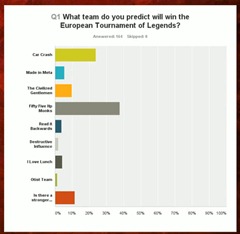 11 replies on “GW2 Llama Finisher and Ready Up Ep11 notes”

Rewards are level specific to the character opening that reward.

So much for pvp players getting their legendaries through pvp. Have fun with your t1 crafting mats!

Do you mean the PvP Rank not level, because I opened a chest with a level 80 character and still got t1 mats.

The mats tier i believe it’s mainly decided from the tier of the reward track…as you see even the crafting mats get up of “level” as you go on with the track.
I think it was meant more towards equips etc.

lmao… that finisher. must get. now.

i wish they would have done something a bit more for the cow finisher though dropping a cow on someone is priceless. ~my No.1 finisher~

Why didn’t they put this one in the gem store, I would buy this one.

It will be buyable soon 🙂

“Custom arena only allow progress for 25% of the reward track.”

You can only do 25% on your reward track in a normal match, however if you do tournaments you can do the full reward track 🙂

Strange..I did like 18 of the 40 steps for the Balthazar backpack without every joining a tournament etc xD…and i think that most of them were custom arenas (since they all were for 8-10 ppl)