Preface for 3.0: This article has been updated for 3.0. Nothing substantive changed in the information presented here due to 3.0.

Last time – and it was quite awhile ago – we examined how Tooltip Damage values were calculated, and I mentioned that tooltips do not tell all of the story. Here I will try to outline more of the story, although there will be a third article on the subject that examines DoTs, stacks and other oddities.

To start, I want to introduce the concept of expected damage. Let’s assume an attack does 3,000 damage and has a 90% chance to hit, a 33% chance to critically hit for 5,250. How much damage should we expect from one use of this attack?

If we recorded 10 uses of this attack we could expect the following:

In SWTOR, there are three factors that influence the expected damage of an ability given specific tooltip damage. In other words, after your tooltip damage range has been calculated these three factors will be applied: Chance to Hit, Type of Hit and the Target’s Armor. Understanding these three factors allows us to calculate our expected damage and helps us make better decisions on gearing our characters. While the information discussed here is applicable for characters of any level, I have focused this on Elder Game scenarios.

In SWTOR, Accuracy is the likelihood that your attack will successfully hit your target. Your Character Sheet only shows a summary of your Melee/Ranged Basic Accuracy and Force/Tech Accuracy:

You may not know but all classes have three different Accuracy values, and Dual Wielding classes have five. The values are:

You can see all of these values by mousing over the Accuracy in your Character Sheet; a new tooltip will open that provides more detail and shows the Special Accuracy. 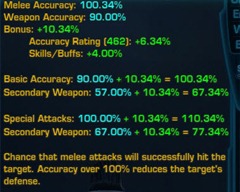 Off-Hand base values are 57% and 67% for Basic Attacks and Special Attacks, respectively. Off-Hand Accuracy receives the same bonus as the Main Hand.

Next, your Force/Tech Accuracy is effectively the same as your Special Attack Accuracy. Its base value is 100% and it receives the same bonuses.

Accuracy Rating is a stat found on gear specifically Enhancements and potentially Earpieces, Implants, and Augments. In the picture above, Skills/Buffs total 4%. This includes the 1% Accuracy Buff from reaching max affection with your melee tank companion. The remaining 3% comes from a skill in one of the skill trees; however, with the release of 3.0 we no longer have access to this talent.

By hovering over the Defense Chance, you will see:

If your Special and Force/Tech Accuracy is 110% or more, you can effectively ignore this factor when calculating expected damage as the extra 10%+ Accuracy will negate the Operation Boss’s 10% Defense Chance. In the case of Off-Hand hits as well as your basic attack, you will need to adjust your Tooltip Damage by this factor: Accuracy * (1-Defense Chance).

Any hit that is not a critical hit or shielded hit will be a normal hit. Once it has been determined that you successfully hit your target, the game determines the type of hit.

The most common manifestation of this is when hits have a 100% Critical Chance. This phenomenon applies to incoming hits as well. Specifically, tanks will never be able to shield a critical hit.

Determining the Magnitude of a Critical Hit

For example, if we have an attack that does base damage of 3,000 and a 30% Critical Chance and a 75% Critical Multiplier, how much damage should we expect? To start, we can calculate the damage of a critical hit; it is 3,000 * 175% = 5,250. Our Critical Chance tells us this should happen 30% of the time. The remaining 70% will be a normal hit of 3,000. We can do a weighted average of the two outcomes to determine the magnitude of hit:

While doing this weighted average approach is always valid, the process can be simplified with this formula:

The third factor affecting expected damage is the target’s armor. Specifically, armor will mitigate some of the Energy and Kinetic damage dealt.

Please note that damage type is independent of attack type. Often, but not always, the Tooltip for each attack will list what type of damage it deals.

Operation’s Bosses have 35% Armor Damage Reduction. Thus, only 65% of the damage from Energy and Kinetic hits will actually damage the boss.

In 3.0, SWTOR expanded the availability of the Sundered debuff, which reduces the targets armor rating 20%. We can effectively think about this as the 35% Armor Damage Reduction being reduced to 28%.

I did not expressly present SWTOR’s two-roll combat system even though the pieces of it are explained in the Chance to Hit and Type of Hit sections. It is worth reviewing in its entirety. The two-roll system governs all combat in SWOTR, including NPCs’ attacks on player characters. The first roll determines whether or not your attack will hit your target. The probability of a hit is increased based on your Accuracy. And, the probability of a miss is increased by your target’s Defense Chance. Assuming your attack hits the target a second roll occurs. This roll determines if you do a critical hit, a shielded hit, or a normal hit. Critical Chance will override Shield Chance when their sum is greater than 100%.

Like last article, I am going to use Rail Shot as my example. 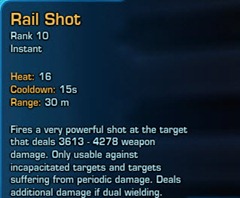 And, the average Off-Hand damage is:

Since we are estimating the expected damage we can average the minimum and maximum weapon damage values.

Next, let’s assume the following:

Our expected damage from the Main Hand is equal to:

Our expected damage from the Off-Hand is equal to:

By adding these two amounts together, we get 3,135 which is the expected damage of a single use of Rail Shot. Again, we are unlikely to see this specific amount register in our combat log, but this should be the value if we average every Rail Shot in our Combat Log. Notice these three factors are multiplicative so it does not matter what order we put them in.

We can combine our tooltip damage calculations with the three expected damage factors to determine, on average, the outcome of an attack. It is important to model each individual attack as many attacks have unique factors such has a higher Critical Chance or the ability to bypass a percent of the target’s armor. Altogether this allows us to understand the best attacks to use and the best stats for our gear.