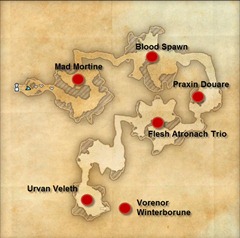 A Note about the dungeon

Veteran Spindeclutch is considered to be one of the easier VR5 dungeons and is friendly to vampires and werewolves due to the lack of fire/poison attacks. The first couple of trash packs before the first boss can be abit difficult. Players at VR1 may attempt this dungeon but they may lack the DPS/heals to survive some of the boss encounters. Luckily the second boss can be skipped if you are low on DPS. 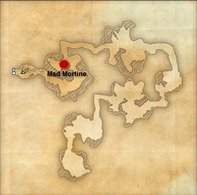 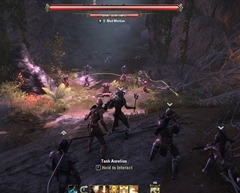 Mad Mortine is an incredibly easy boss that comes with a group of 7 Blood Fiend adds (each with 6621 HP). AoE abilities should be used to finish off the adds quickly before burning down the boss. AoE crowd control abilities such as Volcanic Rune from Mage’s Guild skill line (morph of Fire Rune) are incredibly useful to control the adds.

Tanks need to be aware of of a charge up attack from Mad Mortine in which he will jump up in the air and land on you. Block this attack and taunt the boss and any adds that are harassing other group members 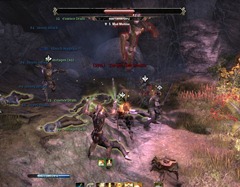 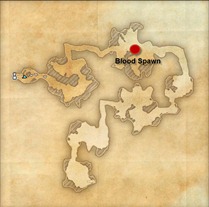 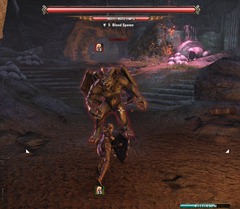 Blood Spawn is a boss with a high DPS check but groups with low DPS can skip him by running through the right side of the room or by simply running to the next room since he has a short leash range and will deaggro once the player is out of the room.

Everyone stack on top of the boss and have healer heal through the AoE. Avoid the edges of the room and right side of the boss as falling rocks will kill you. DPS race with enrage at the 2 minutes mark.

Blood Spawn has three mechanics, all of which can be worked through by having the entire group stacking on the boss for best possible DPS and then having the healer heal through all the damage. 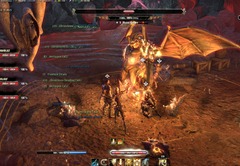 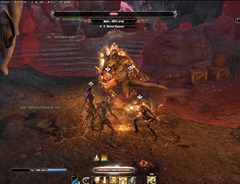 Other than taunting the boss every 15s, tanks need to beware of Blood Spawn’s charge up attack which can deal around 1.3k damage and cause a knockback if not blocked. Overall for the tanks this is a standard tank and spank fight. 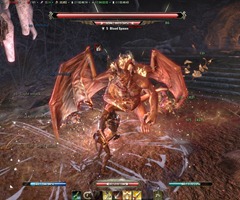 The biggest damage in this fight comes from the Ground Pound AoE which comes around every 20 seconds. Look at the boss for tells and you can predict the AoE to drop healing circles and HoTs to lessen the damage. 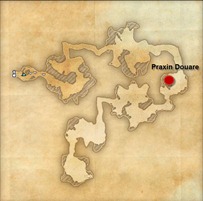 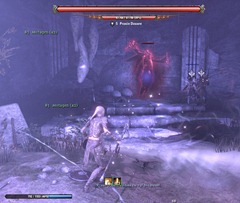 Kill 4 wave of adds before attacking the boss.  First two waves are easy spider adds but for the 3rd wave you want good AoE and crowd control (interrupting healer adds). For 4th wave tank will get main spider add while DPS grab the two other adds and interrupt their heals.

Boss has a frontal attack that can be avoided but also place a circle on a group member. Move with the circle and do not cross it or you will be killed instantly. He will also drain your magicka/stamina so be ready with potions.

Do not waste your time damaging the boss during the add waves as boss is pretty much immune to damage until he transforms at end of the add waves. 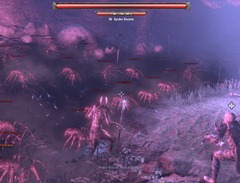 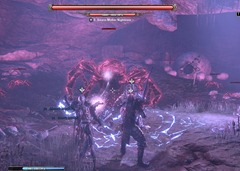 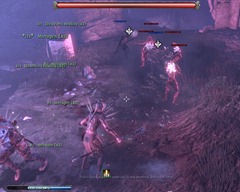 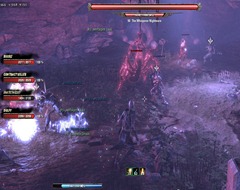 When Praxin transforms to the Lich form at the end of the add phase, he has three mechanics that players need to be aware. 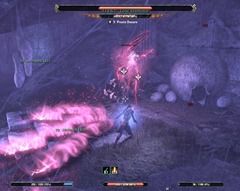 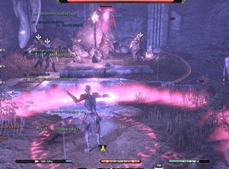 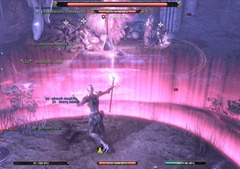 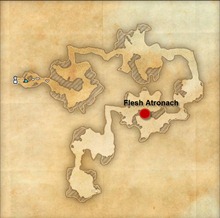 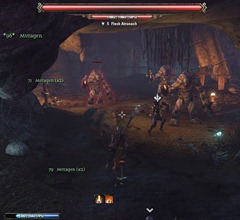 Flesh Atronach Trio is a group of three Flesh Atronachs with around 20k HP each. They do not have any special attacks but they can hit pretty hard if you don’t block their charge up attacks. When one of them dies, the remaining ones heals for anywhere from 10-30% HP. 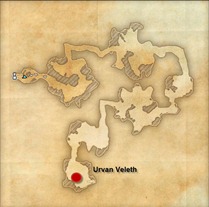 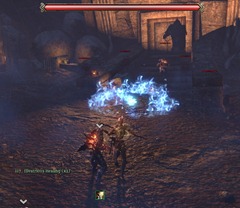 Urvan is a boss with extremely low HP but accompanied by some nasty adds. He comes with two Boneman Archer and two Boneman Warrior adds.

The archers and warriors all have AoE attacks/charge that you need to interrupt/avoid. 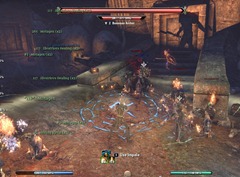 The boss itself will disappear and become a red circle occasionally. This red circle will chase the tank around who must kite him until he appears again. 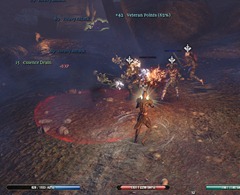 Kite the boss when he becomes a red circle to minimize damage.

Vorenor is fairly easy for an end boss and has a couple mechanics you need to be aware. The undaunted achievement for not killing any of the NPCs on crosses is also fairly easy to get if you have decent DPS

Beware of the red circle he throws on ground and dodge out of it ASAP as it ticks extremely hard. The attack he performs on each group member is unblockable and can crit sometimes, killing someone instantly. When he siphons from the NPCs on the crosses, kill them to stop his health regen. 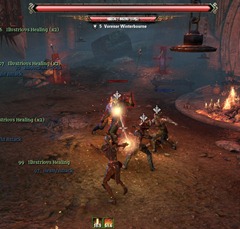 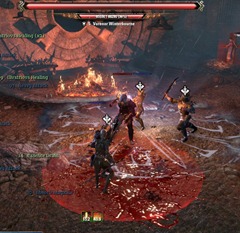 2. Attack on each group member 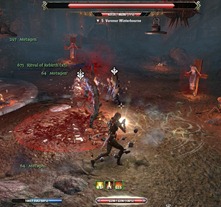 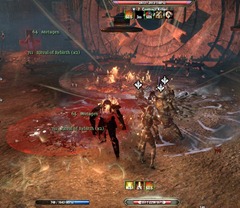 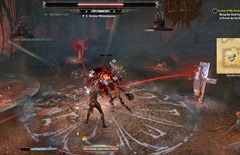 Healers should save their healing ultimates for the phase where he attacks each group member as often as possible. It won’t stop one shots from crits but can help somewhat.

What is your setup armor wise? 2heavy 5 lights? Was thinking about building my healer as a heavy armor healer but I’m unsure due to the fact that I have none of the super magicka based races (like elf or breton). Do you think ut would still be something viable for veterancontent?

I wear all light for the magicka regen and magicka cost reduction. As a heavy armor healer you take less dmg but your magicka will suffer. I am a high elf so I have racial bonuses for magicka but I still wear light.

Yeah, I guess I just have to try if the heavy armor is viable at later dungeons. In low Level it works ok with the setbonus of 3% Spell Cost Reduction.
Another question, out of curiosity, are you enjoying healing in ESO so far? It’s very different from SWTOR and other games with targeted healing. But I kinda like it, it’s another Kind of tactical gameplay 🙂 How about you?

Ya I like it, took a while to get used to no targeted heals but the new method is not bad 🙂

Ive been healing all of the vetran dungeons since last weekend. Im Vr.2,5 and im using 5 heavy / 2light / Resto staff. I havent had any real problems with magicka. But to help myself im also using 3 of the Warlock and 3 Seducer set pices. So yeah, heavy armor i viable if thats the way you wanna play 😉

I just kinda dislike the warlock set because i want to craft my own stuff to look like I want. but thank you 🙂 Will keep on with the heavy armor healer

Hehe, yeah.ITs nice to craft what u want. Thats why the 3 warlock pices i use are 2 rings and a neck 😉

Very nice post! I have always enjoyed your guides and am looking forward to more ESO posts in the future!

Bad ass user for a bad ass game! Thanks for the bad ass guides! Love the community ESO has.

PS: We need more people like you and the people posting positive feed back below on Reditt.

Thanks for the reply. Solid guides by the way!

very very usefull guid for me as a healer who failed this place severel times!! thank you! i will watch this a few more times before trying again 😀