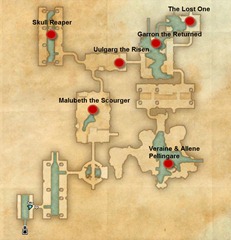 A Note about the dungeon

Veteran Wayrest Sewers is one of the easiest VR10 dungeons with a bit of healing check. Most groups can complete it under 20 minutes and it is a great VP farm for VR8+ as you can quickly reach VR10 by running it over and over. 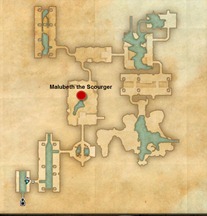 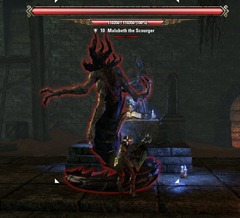 Malubeth is a fight that requires players to pay attention to the boss and their environment. You can activate Malubeth by hitting the two daedric altars on the sides. This fight favors ranged DPS due to obstructions caused by the AoE circles.

Malubeth will throw down two red circles at two players in the spot they are standing. Avoid them as they turn blue and start to damage and slow you. When Malubeth lifts someone, two players must run to the two daedric altars on the sides and activate them to free the player. Positioning is crucial here as you do not want to the circles to land next to the altars (i.e. don’t stand next to the altars).

Malubeth’s ranged auto-attacks hit a bit hard so tanks should be blocking each attack if possible to lessen the amount of healing needed by your healer. Her auto-attack is a blue bolt so it should be easy to time it and block before her bolt hits you. 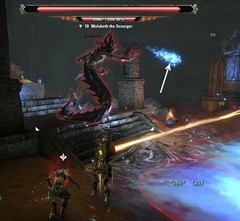 Malubeth will drop 2 circles on top of  two random players in the group. There is a nice little animation where two blueish balls will home in on the ground below two players to turn into red circles. These red circles will then turn blue and start dealing damage and slow anyone caught in them. It should be fairly obvious to not stand in these circles and move out immediately. Ranged DPS is favored for this fight due to this mechanic as the circles can block melee access to the boss.

Do not stand next to the daedric altars as this will cause AoE circles to be dropped on top of them. The AoE circles do last for quite a while so the room can get abit messy 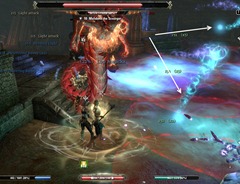 When Malubeth turns purple and has beams connecting to someone, she is lifting that player up in the air and other players must free them by running to the two daedric altars on either side and activate them. While being lifted, that player is suspended in the air and takes damage. If they happen to get unlucky and get lifted above a circle, they will also take increased damage and will likely die unless the healer is quick with heals.

It is imperative that players drop whatever they are doing and run to the daedric altars when this happens. Slow response is one of the reasons why groups wipe on this boss. 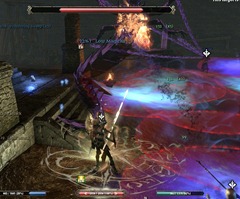 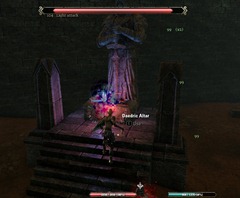 Other than blocking Malubeth’s ranged attacks, tanks will need to becareful to not box themselves in and cut off healer’s access to you. 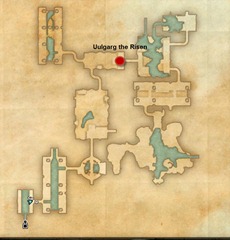 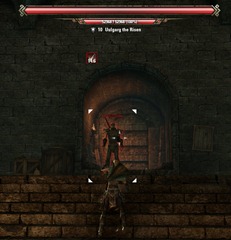 Uulgarg is a sort of a mini boss with only half the HP and a very simple mechanic. A good reaction time is crucial. Use Interrupt to break out of his fire trail and stay away from each other so your fires don’t overlap.

Uulgarg will fear the entire group and cause everyone to leave behind a fire trail as you run aimlessly around. You need to break out of this fear ASAP by using your interrupt button. The faster you break out of this fear, the less fire you will put on the ground. When Uulgarg does his fear, he will spew out lava around him so this attack is easy to spot and react. Everyone should be spread out to avoid running into each other’s fire when feared. 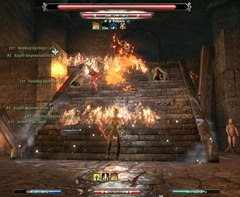 The other attack worth mentioning mainly for tanks and melee DPS is a red circle attack in which he will swing his weapon around. It is fairly easy to get out of it. 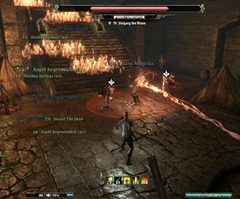 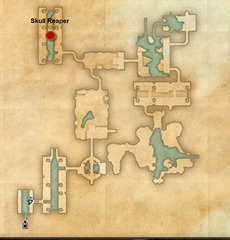 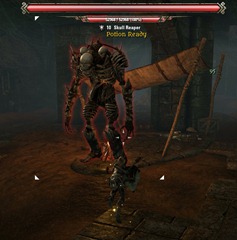 Skull Reaper is an optional boss that a lot of groups tend to skip. It is a fairly easy boss in terms of mechanics but a little screw up can cause you to start over. Kill the healing adds and avoid the frontal cone attack.

When Skull Reaper bends his back, he will summon four Risen Dead skeleton adds with 2.5k HP each. These guys will heal the Skull Reaper so they should be killed ASAP. This is the case even when the boss is low on HP as I have seen the boss healed from 1% to 50% due to these adds not being killed. 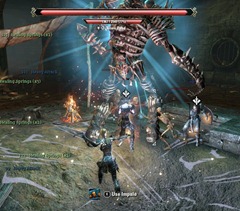 Skull Reaper got a nasty Frontal Cone (red triangle ) so he should be turned away from the group. It will almost one shot non-tanks if not blocked and for tanks it can dish out around 40-50% of your HP. This attack should be avoided by sidestepping. 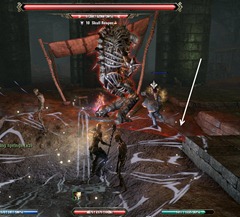 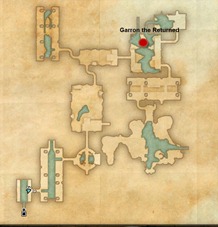 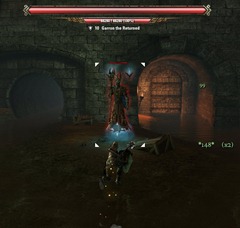 Garron the Returned is one of the most healing intensive fights in Veteran dungeons and having some offheals from the DPS can go a long way. This fight also requires good DPS and crowd control as lacking these can make the healing requirement even harder. Fighter Guild abilities are really handy for this fight.

Kill/crowd control the adds ASAP when they spawn as they can one shot you if you don’t kill them quick enough. When Garron ports, stack on healer and heal through his beams. Fighter Guild abilities (Circle of Protection, Silver Bolts) are useful to have for this fight.

Garron throws down some AoE circles on the ground which are easily avoided and mostly harmless. Just be sure to move if you see one under your feet. They are not aimed at players like the first boss so the chances of them landing on top of you is fairly small. 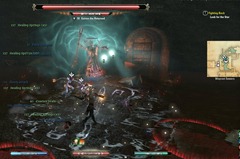 Garron will release 4 adds around him that are called Escaped Souls and each have 2.5k HP. They do lots of nasty stuff including ice attacks that will root players in addition to dealing damage. They must be killed quickly and crowd controlled to reduce their damage output. If not killed quickly, these adds will do attacks that will one shot players.  Silver Bolt from Fighter’s Guild helps a lot here as it will stun these guys for a few seconds.

There is a visible notification before these adds spawn as small anchors will appear first. This give you plenty of time and warning to run to the adds and kill them ASAP. 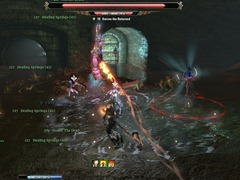 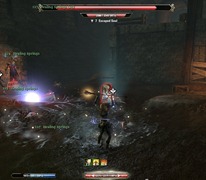 Garron’s deadliest mechanic is his beam attack. Before he does this attack, he will teleport to the center of the room so this is hint that the attack is coming. Everyone must be stacked on the healer and healer need to just heal through the massive damage. Ring of Preservation (morphed form of Circle of Protection) from Fighter’s Guild makes a huge difference here in lessen the damage. DPS/tanks should offheal if they can to lessen the load on the healer. 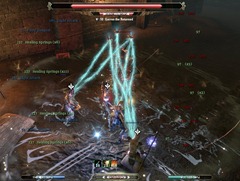 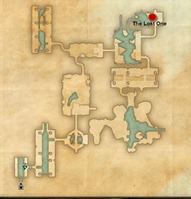 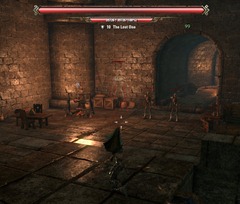 The Lost One comes with a bunch of adds that should be killed first. He has only one special attack, a frontal wave that reduce your max HP and can one shot you if not blocked. Face him away from rest of the group.

The only mechanic for this boss you have to worry about is his frontal wave. Before he does this wave, he will back up a few steps and this is your warning to start blocking. Tanks should face him away from rest of the group and not try to dodge this frontal as doing so risk hitting other group members.

If you do not block this wave, you have a chance to get one shotted by it. 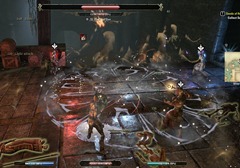 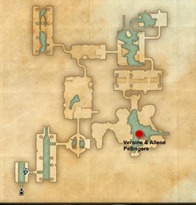 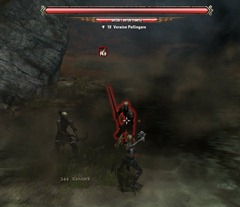 If you want the Undaunted achievement, do not kill the zombies inside the room. If you see the aggressive zombie Harbinger, solo him only. You need to kill 15 zombies while fighting this pair of bosses so you will need to have the DPS split up to kill the zombies at the start of the fight while the healer and tank focus on the boss.

Block/Avoid the cone/circle attack from Veraine. Have a DPS on each boss and eventually DPSing them as damaging one boss 15% more than the other will cause the lower HP one to gain an immunity shield for 20 seconds. When you get ported to the middle of the room, gather up the 5-6 bat adds (3k-5k HP) and AoE/Crowd Control them.

Veraine have a conal and circle attacks that you should avoid or block. Tanks can simply block them as they deal very little damage when blocked. 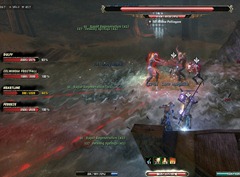 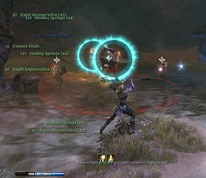 Each of the two DPS should pick a boss and just focus on them to even out the DPS. If one boss is damaged more than 15% HP than the other, the lower HP one will gain an immunity shield for 20s. This isn’t ideal as it extends the fight duration. Some kind of coordination is needed but even if they do gain the shield, it isn’t a big deal. 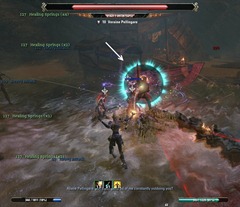 Periodically during the fight, the two bosses will disappear and your whole group will get ported to the middle of the room. When this happens, about 5-6 bats with 3k to 5k HP will spawn. They have this nasty shriek attack that will stun players so they should be crowd controlled and AoE’ed down. 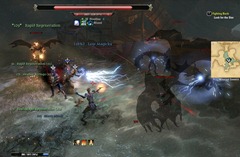