Note: This guide was written based on the last iteration of PTS. Fight may change on the live servers. 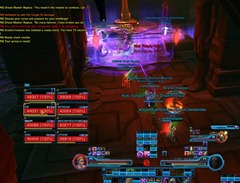 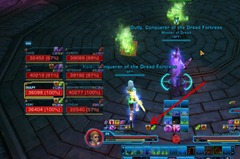 DPS challenge have two target you need to eliminate. The right target is shielded initially so you will need to burst down the left one first before killing the right one.

The fight is doable if you fail only one healing and/or DPS challenge. If you fail two of the same challenges, it might be a raid wipe.

The tank challenge has a debuff (called "Curse of Proximity"; looks exactly like the Nightmare Power buff). This debuff is placed on the tank closer to the NPC and causes the damage in the challenge to tick for twice as much (about 2k on a maxed shadow tank). Note however that the damage in the challenge is no longer internal (as it is in HM and SM) but energy, which means it is subject to shield mechanics (making the overall damage taken only slightly higher than HM).

The easiest way to clear the tank challenge and come out in a good place is to have one tank designated as the main tank. A shadow/assassin (particularly in hybrid) or a guardian/juggernaut works best due to cooldowns and mobility during Spinning Attack. The off tank should stand forward and take the debuff in the challenge with their cooldowns while the main tank guards them and just keeps their active mitigation up. A shadow/assassin in hybrid spec can use Blackout, a medpack, Cloak and if necessary Blackout a second time to further reduce damage without using major cooldowns; guardian/vanguards can use Focused Defense/Enraged Defense for lolvictory. Vanguards/Powertechs make ideal off tanks for this due to the 18 second duration on their shield, as well as their extremely high mean mitigation against force/tech+energy/kinetic damage.

Without using cooldowns or going in with HoTs/bubbles, a shadow/assassin tank in hybrid spec with 46k HP will die from full health in the tank challenge if they have the proximity debuff the whole time, even with two tanks in the challenge.

Past 40%, Raptus will enter several Spinning Attack phases in which he will spin around at a rapid speed and chase a random raid member. You need to run away from him during Spinning Attack as it is likely a one shot if you get hit by it. Predation can help if someone is having a hard time running him from him. Spinning Attack has a 3.0s cast so melee should watch his castbar and run away when you see him casting it. 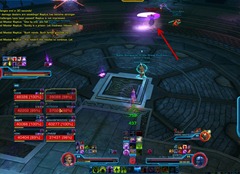