A guide to the achievements for the Gates of Maguuma living story release on July 1. 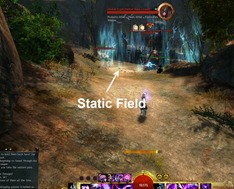 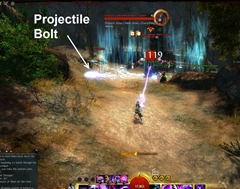 1. When you are given the air leap crystal, go left and you will find your first one. After destroying it just jump down and Kasmeer will port you back to entrance.

2. At the location of the 3rd clue, you will find one in the structure/bamboo stacks behind.

3-4. They are both in the dust mite area. One is in a corner and the other is slightly below in the opposite direction. 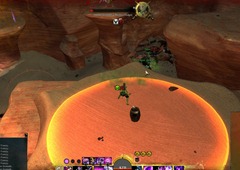 “You can no longer go up the jumping puzzle using the normal way” actually you can, you can collect the one Air Jump Crystal multiple times so it lasts up to 1:30
and if you don’t wast Jumps you can get up there with 8-9 jumps

That is kind of cheesing it though 😛

i work with what the game gives me 😀
also since you can’t waste more than 1-2 jumps, it’s not that easy 😛

So what is reading guides then?

Reading guides and learning how to do something is very different from finding an easier or perhaps unintended route. Knowing is only the first part solution, you still have to practice it until you can achieve it.

There are no unintended routes. It’s just a clever use of means/skills made available by ArenaNet.
And although I appreciate your guides and use them if I’m still missing something I cannot figure out otherwise, Dulfy, by reading your guides you don’t learn how to do something.
You get the solution for puzzles held pre face. You basically do the achievement for us/them.

Considering that is the only crystal I’ve seen that doesn’t disappear the moment you pick it up, I have a difficult time believing it’s “unintended”. 🙂

They said on yesterday’s livestream that it was unintended so..

if it’s still there after a patch, it’s no longer unintended.

Yea your way is definite better, I suck with jumping puzzles so this worked great for me. Thanks!

For Zephyr’s ascent, you can get up the normal way using the wind crystal that Marjory threw down earlier – it doesn’t disappear on use like the open world ones, so strafing about on it extends the buff duration. Once you have 1min30 on the buff just go the normal way and make sure you only leap when needed because you have 10 charges.

You can get 1.5 minutes of the aspect to make the jumps too

For ‘Opportune Moment’, just before Majory build her bridge there is an “electric” cristal behind a wall that if you hurry enough you can go through the hole and you can hit Aerin before he leaves.

Her name is Taimi, though, not Tamini

If you climb on top of the tarp/rubble on the right. And look down. You can see the haypile almost directly under you. It’s a very easy jump then ^^

Interesting tip, sniping the Golem in that sentry tower is a cheap way to avoid getting hit or little golemite aggro. 😛

For Opportune Moment, just to clarify, you do NOT need the lightning pull to get this achievement. You can cross the bone bridge, jump over the gap, attack Aerin and still get the achievement.

I got most of these achievements by helping a guildy run through the story quests after I had finished them myself. For the hay pile I just had him stand on it so I knew exactly where it was.

Dulfy i think on the “Cornered” Achievement, the Explosive Avoidance is not on phase 3, but on phase 2 instead (the second time you face Aerin).

I got hit by one of the bombs he placed and the achievement got removed instantly.

You must avoid the big BARREL bombs on all fights.

If you get hit by the other smaller orange AoE it doesn’t matter.

Dulfy in Fallen Hope you can stack 1:27 minutes in the crystal air, enough for you to jump puzzle by conventional path

hey dulfy newbie here, i already completed the story instance with my main guard and decided to do the achievements replay with my warrior, but i didnt get any achievements at all. So i guess these achievement are bounded by character and the ap and rewards are account bound?

i see thanks dulfy!

what are rewards for cheevos ?

No rewards, there is no meta achievement

The reward is tied to each individual achievement now, rather than a meta. You’ll get the AP and a box of rewards worth, as of this posting, 1-2 gold.

A tip for mesmers: it’s trivial to get the “No Shocks Here” achievement. Just put a Feedback on the golem as soon as he puts the static field. It will almost kill itself istantly, and you won’t even get the chance to get hit.

Guidies and i cant figure out for the life of us how to activate my story instance. they did it fine but somehow mine is not popping. Am I alone on this?

mines not showing up either.

found out you have to go back into your “h” panel and go down to story journal icon (looks like a star) and go down to season two and chose the option to activate (or something like that, not sure what it’s called specifically).

Unfortunately you must be level 80 to do this Living World 2 so if you are not level 80 that’s that problem. Because other than that you should be able to do it, also you can start the living story and go back to the normal gw2 story.

for zephyr’s leap, ive been doing for hours and in the end i didnt make it right at the hay pile but still got the achievement 😀 lol

i did everything as u did, and got fucking non of the achieve, what the fuck is wrong with this game

did you do this AFTER you finished the quest line the first time?

What if you go thru the questline the first time on one toon then on second toon you go thru and try for cheves? For instance, I killed the 4 inquest things for No Rock Unturned on my second toon, but did not get credit.. so I am guessing I have to do it over again on one of the 2 toons I finished it on?

If you want to get achievement on a character, you need to do the story instance on them first.

Thanks for the great guide 🙂 I managed them all up until Dashed Advantage. I even managed my way up there but never noticed the symbol showing you could dash through! xD

I don’t see any purple circles … ?

what is your mesmer build?

“After Tamini clear the vines a second time, a bunch of mobs will spawn.” – as far as I know, the Tamini tribe of centaurs do not join this part of the story 😉 Should be “Taimi” in her golem-suit!

thanks for the tip, this worked out great for me

There is way easier ways to do the jump puzzle, just search youtube, not idea why dulfy have chosen hte hardest path.

Making the leap can be done without swiftness and simply by dropping off the edge into the hay bale. As long as you move forward after dropping off, no real aim is needed, the bale is pretty generous. I even fell on the cliff side of the large bamboo protrusion. That’s how bad I managed to succeed.

as soon as i dash thru the door i get ported out? i saw the golem once and was immediately ported out as he started to run to other side.kept getting port out after 2nd 3rd 4rth attempt too? bugged?

btw the achieves are out of order. #1Opportune Moment #2Explosive Avoidance #3Dashed Advantage. Not sure if all can be done in one instance either as you leave aerin at 50% then go do dashed Advantage( maybe go back and finish fight?)

I just completed it 2-man. Give that a shot.

That happened to me on my first try as well. I had to do the instance a second time to actually get into the room before the golem had exited.

Put some distance between yourself and door. Do not stand close to it.

Ty for this article, helps a lot.

Pretty bad guide for the golem boss. More luck than strategy. Much less time and pain just doing it twice.

I think this hasn’t been explicitly said yet, so I tested it again (10/2016) and yes you have to finish the story chapter with the same character in order to try get those achievements.

Thanks for the guide, did all the achievements in one go.

Did everything as is written in the first part, took warrior, stayed in range with rifle.
Workers finished both barricades and disappeared – no achievement.
Never was hit by the electric stuff coming from the boss – no achievement.
Golemites were walking near the boss, no idea, charged or not, tried to keep the distance, finally even waiting for a bit before ending it, but still – no achievement.
Maybe it’s not my day, don’t know whats wrong, but certainly it put me off for the rest of the day to do any of those or the others.
Thanks anyway for the guide.

Note: You must complete the story instance once before the achievements unlock.
Maybe that was your issue?

oh gawd forgot that. on a differnet toon the when i first did it. h8 these old cheevos – have to do it once first ughs

AAAAHHHH!!!! So frustrated with JP!!!

use a necromancer, spectral walk makes it easier, if it also makes it take longer.

this was much more helpful then the wiki. thanks

cheevos for Dashed Advantage and No Rock Unturned seemed broken unless somethign has been left out.

edit: oh gawd have to run it once to unlock cheevs so annoying this old way.

Hey, I’m coming back in 2021 to this thread because I’ve been running my guildies through these achievements and I wanted to add a few notes that either aren’t covered or things that have changed/consistently happened for me and my guild.

Disturbance in Brisban Wildlands: You cannot have the person who needs the achievement stand in the way back while you take care of the golem. They need to hit the golem at least once and then hit it again within a 1 min 30 sec time limit, otherwise they lose eligibility for the achievements.

Cornered: This is for Dashed Advantage specifically. The same thing happens with Aerin as did the golem in disturbance; the players have a 1 min 30 sec time limit to clear the room otherwise the players who need the achievement will lose eligibility. Also, the golem will not start walking until the first person has sun dashed behind the wall, so you can use a portal to gather the players at the entrance. Speaking of portals, if you use a teleport skill (such as Blink or Portal) you will lose all the crystals on your skill bar. So no porting after you’ve gotten the crystals, you need to grab them after. The crystals themselves can only be grabbed by one person. So if one person grabs both sun crystals at the top, everyone else needs to wait for them to respawn before they can enter the room.

This may not apply to everyone, but I thought I’d put these here because these are the things that consistently stopped me and my guild from getting these achievements.