The following is a video of a Silver Medal run on July 9. It covers all the trash and bosses. There is a bit of trash skipping enroute to the last boss to save time. The total run is 28.5 minutes.

What to Interrupt: Thunder Cross in Phase 1, Electrostatic Pulse in Phase 3

Thunder Cross is casted fairly often so you will need to have 3 sets of three interrupts. This allow the first set to be off cooldown by the time the third set finish their interrupt. Every DPS and tank should have at least two interrupts. The healer can also bring one more interrupt for the 9th interrupt unless a DPS (i.e. Spellslinger) have 3 interrupts.

During the Transition you will be disarmed. You can either run around to find your weapon or wait it out as there isn’t much you need to do right away. Otherwise you can get yourself an interrupt armor or use a CC break to end the disarm quicker.

Lightning Strike is the new ability that the Invoker gains during this phase. This is a red circle that follows you around until the inner circle reaches the outer. Once this happens, the circle will stop follow you and will be dropped at your last position. You will need to drop this final red circle on the Thundercall Channeler to break their shield and provide Moments of Opportunity.

Your goal for phase 2 is to kill each of the four Channelers one by one. Use Lightning Strike to drop their shield and provide Moments of Opportunity. After each channeler is killed, a Static Wisp spawns and start spinning around the room. The ones close to the middle spin slower while the ones in the outer edges spin faster. If you do get caught by one of the Wisps, you will be stunned momentarily, which can be lethal if a Lightning Strike or Thunder Cross lands on you right after.

During the transition to phase 3, another disarm happens. You will want to find your weapons quick or use a CC break as you will need to interrupt Blade-Wind pretty soon after.

Electronstatic Pulse is the new ability Blade-Wind uses in this phase. It is a group of 3 casts that follows one another, each needing to be interrupted separately. The cooldown betweeen the groups are short so you may miss one interrupt on the second group. In that case, there are some safe spots in the room. The interrupts will provide Moments of Opportunity on the boss, allowing you to burst him down quick.

Lighting Strikes still occur in this phase but much less frequent. Static Wisps from phase 2 are still present so you will still need to pay attention and not get stunned by them.

What to Interrupt: Tempest in phase 3

Torrent is an attack that places a red circle undernearth each party member. If you fail to dodge out of it, this circle can hit for 20k damage. Aethros tend to rumble and speak during this attack so you will know to dodge when you hear him starts speaking. 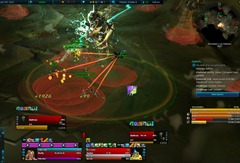 After a couple of Torrents, Aethros will start casting Air Shift. At end of this cast, he will disappear and summon three adds each with 160k HP. You will also see a text on your screen that says Aethros starts to dissipate! 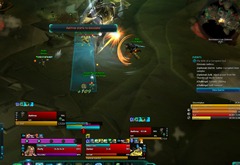 Once all three Gusts are killed, the fight transitions into phase 2 immediately with a knockback that put you back at start of the room.

After the knockback, you will need to run past the moving Tornados and Lightning Strikes to reach Aethros at the other end of the room and interrupt him before he finishes casting Tempest (15s cast). If this attack is not interrupted (3 interrupt armor, so 4 interrupts), the entire party will wipe. The text on the screen (Aethros has reached X% power), tells you how far he has casted Tempest. 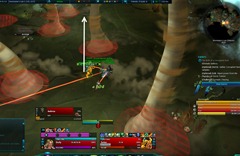 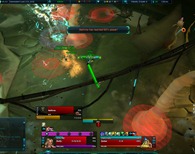 After you have interrupted him and get a few hits in, Aethros will teleport to another spot in the room and you will repeat Phase 1 and Phase 2 again.

Phase 3 is a modified version of Phase 1 that occurs after the second phase 2. In this phase, all of the Phase 1 stuff still occurs but now Tornados join in the fight and move constantly back and forth.

There are two possible optional bosses in the area right before Stormtalon. You will need to use a lift to get to them.

Interrupt his Gust Convergence (2s cast, 2 Interrupt armor) or he will summon three adds with 79k HP each. 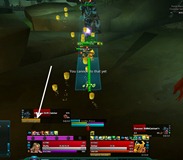 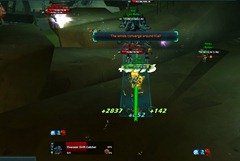 When he casts Electro Storm, you will need to DPS down his shield (100k)  to stop him from casting it. Stay away from other players and avoid the telegraphs. 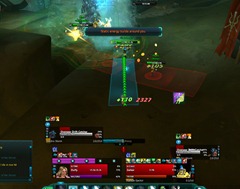 Finally, whenever he explodes with a blue explosion, he places a stacking debuff that should be cleansed (most groups can simply heal through it) 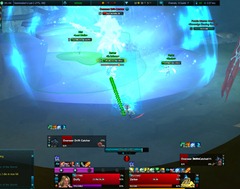 What to Interrupt: Static Wave for phase 1.

Stormtalon has a frontal cleave that deals quite a lot of damage and snares. This frontal cleave has a fairly small telegraph that comes very quickly so tank will need to turn Stormtalon away from rest of the group and take the cleave damage. 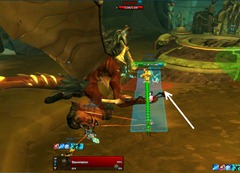 Static Charge is a 2.0s uninteruptable cast that adds movement into the fight. Immediately after this cast, you will see two text messages on your screen

The main thing to watch out for is the Electricity text as red circles will immediately start landing under everyone’s feet and the group will need to move to avoid the lighting strikes from these AoEs. Generally if the tank moves Stormtalon to the edge of the room, Stormtalon will move back to the center to do his next attack, Static Wave and this can be a good tell for players to position themselves for the knockback.

Static Wave is a huge knockback followed by a enclosing wave that will one shot anyone caught in it. Immediately after the knockback, you will be stunned and need to use a CC break to break out immediately. After breaking out of the stun, you will want to head towards Stormtalon and interrupt him (he has 4 interrupt armor during this stage).

The trick here is that you cannot look at Stormtalon directly while running to him as he drops Lighting circles directly in front at the direction you are looking. Therefore, you want to look away from Stormtalon but strafe running towards him so that the red circles are dropped on the sides rather than in front of you. Becareful when you do this that there isn’t any other player in your field of view as this can make the run harder for them. 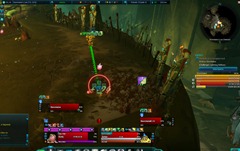 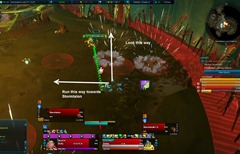 Once you get to Stormtalon and throw 5 interrupts on him, he will stop channeling Static Wave and be stunned for the remaining of the channel (less than 10 seconds). This presents a Moment of Opportunity where you can do massive damage to Stormtalon for a few seconds so make sure your finishers are charged up.

In phase 2, Static Wave is replaced by Eye of the Storm, everything else remains the same.

Eye of the Storm

Eye of the Storm triggers the start of phase 2, roughly at 55%. It will reoccur again at 30% and then 5% (roughly every 25% of Stormtalon’s HP). This mechanic replaces Static Wave so you do not have to worry about the knockback and interrupts anymore. You will see a message on screen- Electricity flows through Player X and everyone will need to run to that player after recovering from the knockdown. You have a few seconds to do this before the storm start to deal serious damage.

That player will be disoriented (i.e. movement keys not corresponding to your intended direction). They can either use a CC break or just press a single button and move in that direction. The person being targeted will spawn red circles under their feet so everyone else need to move in front of them to avoid the red circle. The goal here is to move slowly and not dash as doing so can cause you to get thrown into the storm where a single tick can instantly kill you. DPS will need to keep damage Stormtalon while inside the circle.

Thank you for this guide.

what addons have you got for your UI and can you link your amps and build pls?
Awesome video

In the 1st video you failed a lot, in last video you almost wiped your party dashing for no reason. Anyway thanks for the text, it was helpfull