ESO The Road Ahead Letter for July with some important changes to the Veteran systems.

It’s time for another update on what we’re up to at ZOS, how things are going for ESO, and what to expect in the near future.

ZOS AND ESO AT QUAKECON

As part of the pan-Bethesda fan event, we’ll be out in force at QuakeCon in Dallas from July 17th through the 20th. Most events related to The Elder Scrolls Online will be held on Friday, July 17th. We’ll have our own panel, there will be hands-on stations at our booth, and we’ll host a Q&A session. Everyone is welcome—we’d love to see you there. If you can’t make it to the show, you can still join us to watch the panel and Q&A on our twitch channel! Here’s a breakdown of what we’re planning:

To get all the details about our presence at the show, including how to enter the tournaments, check out our QuakeCon article.

We’re getting closer and closer to being able to announce a specific date for the migration of the EU Megaserver to our Frankfurt data center. As I type this, it looks like the move will happen during either the last week of July or the first week of August. This is obviously a delicate operation, and we have to make sure that everything is up and running and that all character data is transferred successfully. We are taking the time to do it right.

We’ve been listening to your feedback about ESO’s Veteran Rank content. Some of the issues are that it’s too much of a departure from the 1-50 experience, it’s much more “grindy,” it can be too difficult, and the rewards don’t match the effort you have to put in to progress. I’m very happy to say that we’ll be making a series of announcements (starting at QuakeCon) that will address problems with the Veteran System in ESO, leading to a much more compelling high-level PvE experience for everyone.

In the interim, we’ve implemented some balance changes to content in post-50 zones that will make it much more like the content from levels 1-50. Our goal is to remove the feeling of “I have just hit a wall of difficulty” that many of you have commented on—you’ll be able to solo much more easily.

One of the guiding principles of our Veteran gameplay was to encourage people (not force them) to group. We wanted people to be able to solo to max level, but still wanted you to participate in group content.  This principle was the reason we made our post-50 zones more difficult; we wanted you to get together with others and take on tougher challenges. But this hasn’t been well-received. Many of you love the game you played from 1-50, and the Veteran-level zones are too much of a departure from that experience. We know you want the ability to continue participating in solo content as you progress through Veteran Ranks. This will occur over time, but the first few phases look like this:

The primary reason for making these changes is to ensure that you have meaningful choices in the post-50 PvE game experience that reinforce the design idea that you can play the way you want to play.

Update 3 (or “Guild Extravaganza!” as we call it) introduces lots of guild and player customization improvements, and it will be coming to the Public Test Server (PTS) soon. Few features are more important to ESO than guilds. They provide the easiest and most fun way to meet new people, chat with groups while you’re playing, and are almost always the first choice when putting together a dungeon or PvP group. As such, we’re devoting a large portion of Update 3 to making sure that guilds are easy to create, fun to join and manage, and provide players with a social group that helps them in their journey through Tamriel.

It is also important to note that almost all of these guild enhancements came about as a result of your feedback. Please keep up the comments on the forums, on social media, and in places like reddit—we are reading and listening. 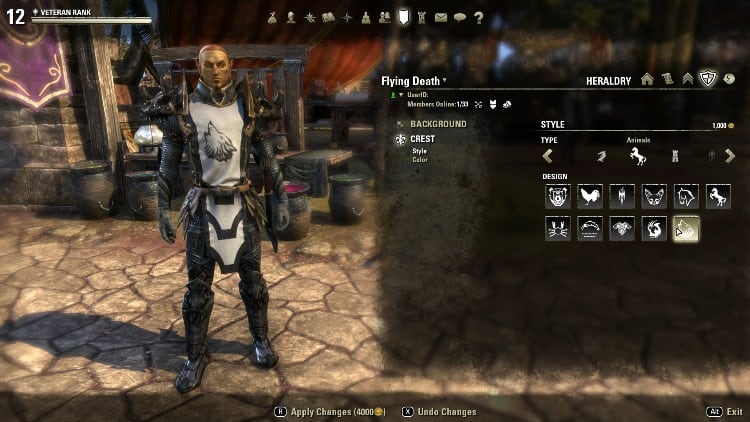 I’ll take this opportunity to repeat an important point: we make class balance changes very slowly because they can have a big impact on your play experience. We’re making changes carefully, but we are always watching feedback about balance concerns. Recently, we adjusted stamina builds to help them become more competitive by making medium armor reduce the cost of stamina abilities and by improving the damage for several stamina-based abilities. In Update 3, ultimate abilities will scale from weapon damage or spell damage—whichever one benefits you the most. We’ll continue to make incremental changes to address balance issues.

It’s important to note that from now on, whenever we introduce a major change to a skill line, we will be offering a free respec to players who have invested points in that line.

Here are some other character and ability topics we’re looking at for potential balance changes and tweaks:

One of the most fun reasons to play games like ESO is to obtain cool weapons, armor, and other gear through the course of your adventures. We’ve been closely following commentary about how, at some points in the game, it feels like you aren’t being rewarded adequately for the amount of effort you put in. I’ve already talked above about how we’re looking to alleviate this at Veteran Ranks, but it also applies to some sections of the 1-50 experience.

We’ve seen feedback that there isn’t enough differentiation in armor appearances—especially as you adventure from moment to moment—and that the items you find are not substantially better than the ones you already have, leading to a feeling of incremental gain but never something exciting or momentous.

Armor dyes, which will be in the game as part of Update 3, will help by giving you the ability to customize gear colors to your tastes, but we’re also going to introduce some new itemization features over the next couple of updates:

Stay tuned to future patch notes to see how itemization and rewards evolve over the next few updates.

We’ve been working steadily behind the scenes to make combat more fun and visceral. This is a multi-pronged effort to tweak and fix dozens of different game systems to lead to a smoother, more responsive combat system. Similar to how we’re changing the Veteran System, we’ll make meaningful changes over time. We’re making changes to animations, audio, timing, server network optimization, and other factors to make combat more engaging.

We’ll show off some of these new combat enhancements at QuakeCon to demonstrate the evolution the combat system has made over the last few months.

Update 3 will be on the PTS soon, bringing with it a lot of fun new character and guild customization features. This update has been in internal testing at ZOS for many weeks now, and as part of that effort, we had a studio-wide contest to see who could use the new dye system to come up with the coolest (or most horrendous?) outfit. Check out some of the screenshots from the contest—it was a lot of fun, and it shows the lengths to which you can change what your character looks like just by applying different colors. 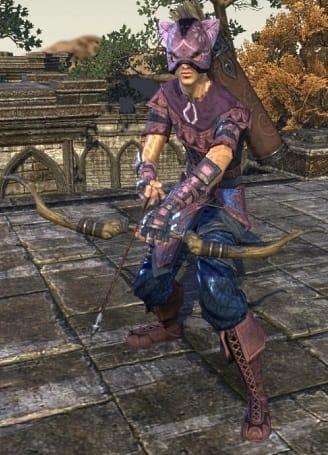 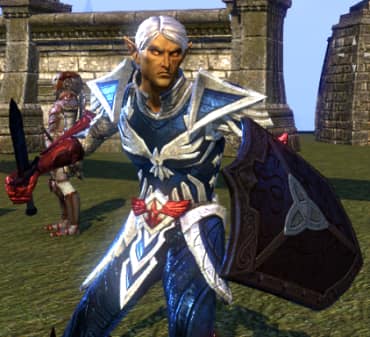 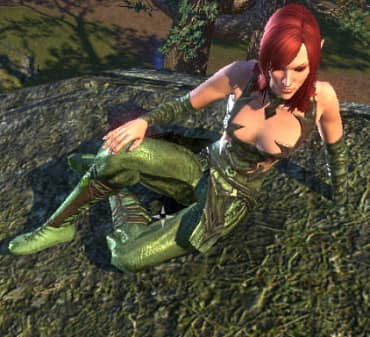 Thanks for reading. As you can see, there are lots of changes coming to ESO based on your feedback. As we roll them out, we’ll keep listening to what you have to say, and we hope you’ll enjoy everything we have planned for you. See you in Tamriel!

Should’ve used a low level Imperial shield for cap’n look. Really wish they had more round shields at high levels… And big ones too… wish I could get some Spartan size shields at end game. That would look so awesome…

I think the one in purple/pink is huntress.

What style is the armour poison ivy is wearing?