How to activate achievements: Incase your forgot from episode 1, you have to do all the stories in this episode to get the Entanglement episode achievement. Then press H and go to your story journal and play through it again to do the achievements. You can do any of the instances in any order.

You shouldn’t have much trouble getting this one. Just fire the cannon at a thick cluster of Inquest and you should get it. The cannon does take a few seconds to kill the Inquest so you may not get this achievement immediately after you fire. Just keep firing. 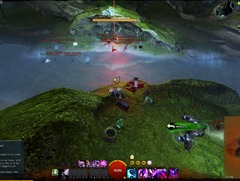 Not a hard achievement either, just spam skill #1 when you are inside the minotaur and #2 when Inquest are close. Avoid red circles and you shouldn’t take too much damage. Can just relog once you get this achievement so you can restart the instance for No Tricks

For this achievement you need to play the story instance a second time without using the cannon or the minotaur. The inquest are not hard to kill but they are fairly numerous and annoying. You can die or downed and still get the achievement. This achievement is awarded at the very end of the instance, on the very final step so you do have to listen through a good 2-3 minutes of dialogue.

The key with this achievement is killing the Thrasher mobs first because they can deal a ton of damage with their spin that throw out conditions. The Thrasher mobs won’t trigger until you (story owner) approach their spawn area so you can take your time with them. The exception is the third Thrasher outside the Fort.

Step 1: Kill the two wolves that spawn a bit distance away from the fort. 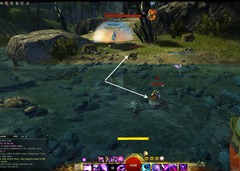 Step 2: Approach the area before the fort, kill the Thrasher that spawns right away. Take care of the Husk next and then the tentacles. 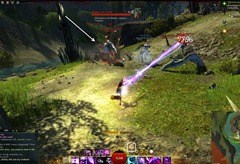 Step 3: Enter the fort, deal with the second Thrasher that spawns right inside the fort. Clean up the fort of tentacles. 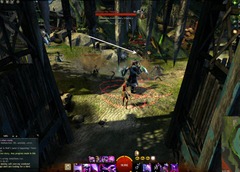 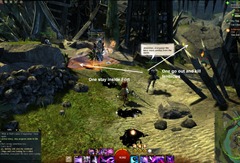 For this achievement, you need to clear Concordia instance within 10 minutes. This achievement is very doable, as long the last event (Securing Goldenlight Hallow) doesn’t bug out. On average it will take you about 4 minutes to secure Fort Concordia, about 1 minute or so for NPCs to go back to the fort and start the lengthy conversation. This give you 5 minutes when you exit the fort to head to the Magister and rescue them inside the cave.

After you rescued Magister, follow her but do not run ahead of her. This may cause the final event (Securing Goldenlight Hallow) to bug out and many of the tentacles to become invul. If the event doesn’t bug out, it should only take a minute to secure the area, allowing you to finish the instance in 8 minutes. This give you 2 minutes for mistakes/screw up/low DPS.

As of a recent patch, you can no longer rezz NPCs at the end of the instance. Instead, you need to rescue the NPCs at the marked locations right after you rescue Magister Lindsay inside the cave. None of the NPCs can die or you fail the achievement. If you approach Goldenlight Hallow before finishing rescuing all the NPCs, this achievement automatically fails as well. If the NPCs are in combat, you must defeat the mobs attacking them before telling them to retreat. 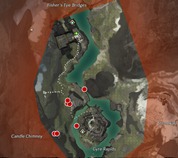 You can head straight to their location after defeating the two mobs at the entrance. They are invul so don’t bother attacking them until the instance trigger the prompt (it will be after Belinda’s speech). You want to have some crowd control abilities (i..e knockbacks, knockdowns, fear, blind) and high DPS. You want to use your crowd control abilities right after they become vulnerable and then burn them down fast. The wolves tend to jump on you pretty quick but the husk may still be on the Seraphs so you may need an extra crowd control ability.

It may take a couple attempts. If you can’t get it, try group up with another player to make it easier. If you have consumables like ember, ogre pet, etc you can use them as well for added DPS.

Your goal here is to make sure none of the Bone Fiends die due to the Mordrem Wolf or Jungle Tendril before they can reach the Mordrem Thrasher boss and blow it up. This achievement is fairly hard to solo and a bit RNG dependent but it is fairly trivial if done in with two players. Make sure to bring crowd control abilities such as knockback, knockdown, fear, blind, daze etc. They will help to prevent the wolf from killing the bone fiend.

Sheltered from the Rain – 5 pts

Fairly easy for the most part. Just don’t stand in red circles or dodge into them. You might be able to get it at the same time as Butterflies and Viscera. See video above if you want a video guide.