GW2 Explorer achievements guide for Dragon’s Reach Part I. Both Iron Marches and Frostgorge Sound achievements are not available.

There are five events you need to hit up in Iron Marches for this achievement, they are collecting samples, rescue workers, Mordrem wolf, Mordrem champion (thrasher) and Gravelash. Unlike most other events, you cannot see them on the map unless you are really close to their location. 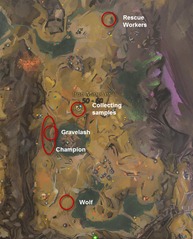 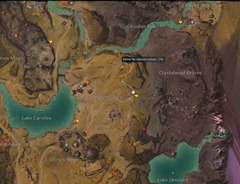 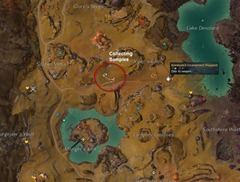 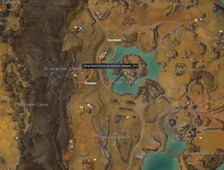 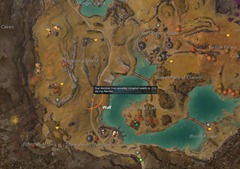 This achievement is easiest to get in small groups or when solo. The Mordrem champion (Thrasher)  only drops the nectars when he has aggro on someone in melee range. The nectars will appear a few seconds after he spawns a poison pool right under him that you have to dodge out of as it ticks really hard. 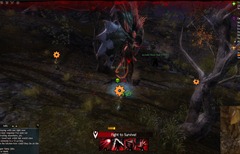 Finish What You Started– 5 pts

There are five events and they are all part of a chain called Breaking the Ice. It starts at Coiled Watch in Frostgorge Sound. 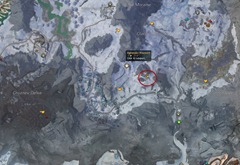 This achievement is associated with two events: Drive the Sons of Svanir from Coiled Watch  and Defend Coiled Watch. Just make sure the NPCs are not dead when the event is near completion as they need to be alive when the event completes for you to get credit. They can die during the event, just rez them ASAP.

There are 3 Dolyaks you need to escort to Barrowstead, just keep them alive. With a large zerg that can attack enemies before they reach dolyaks, this one should be easy as well.

“Bottoms Up: Only 1 player can collect each nectar and he only spawn 3-4 nectars each time.”

This is not quite right. There will be a gear over the nectar that goes away as soon as the first person interacts with them. However, the actual object remains for a while and other people can continue to interact for credit. If you hold down Ctrl it will show their nameplates to help you find them.

He will spawn 4 nectars at a time. There’s actually a tell before they spawn – there will be four tendrils that pop out around him, and those tendrils become the nectars. I’ve seen as few as one round of nectars in a fight and as many as five. Sometimes he’ll immediately spawn nectars again.

Cool thanks, I will correct it

I can’t interact with the nectar. What am i missing?

Boomyaks is hard buged for 2 days now, you free and defend watch but event with dolyaks did not start, what I have last info Anet working on it, but no ETA given 🙁 coz this bug, you CANT follow event chain and got Vial of Sacred Glacial Water at the end

Really ? That’s weird cause I zoned into FGS today, and caught this event at 3/4 done, and me and another guy got Boomyaks.

maybe they fix it by now, but when i try this last time at EU midnight, it was still buggy

Finish what you started and Not on my watch is bugged… it gets stuck at coiled watch 9/10 or you can’t kill the last 2 svanir shamans at the big totem.

Does Mordrem Problems stays at 80% or you can get it done fully?

Toxicity Trampler is currently bugged. I got poisoned, died, and then after WPing the event timed out, and I got the achievement.

Curious thing I stumbled upon.

Great, it is official 😀 (if someone still had doubt about it)

Been there for a few patches now. It’s not new to this one.

Regarding “Collecting sample event is bugged and seems to never spawn in the area it is suppose to. However, you might be able to talk to a nearby NPC to bypass the event.”

I did the sample event a few days ago, so it should be fixed or, at least, it is not totally bugged anymore.

The two npcs are under the big vines. They should be indicated on your map when you do this part of the journal story.

Its still bugged. No modred spawn so you cant complete it.

same thing, there where no mordrem to help collecting samples.
Wheen i connect a few hours later, I found the event with mordrem, which allow me to complete the succes.

how laughable. The Mordrem Spore/Samples event is STILL broken by the time the next patch came out. And then some.

i just made it with few people. veterans mordrems spawned one after another, we bathed in theirs blood and took samples without any problem. and the event spawned in the area every 10 minutes or so.

Are these achievements still obtainable after the patch?

Yup, they are kinda permanent

GW2 Explorer achievements guide for Dragon’s Reach Part I. Both Iron
Marches and Frostgorge Sound achievements are “NOT” available. ??? then why make the guide?

Forgot to change the top, they work now

Bottoms Up Achievement doesn’t seem to be obtainable anymore. The Champ just walks/floats along it’s path like nobody is killing it. Maybe I’m in the wrong spot (I sure hope I am!).

As of August 26th Patch this achievement is now obtainable again.

And once again it’s not. With everyone in melee it just does its charge-spin attack not spawning the nectars.

Bottoms Up, Nectars are not showing up.