September will bring the 2nd feature pack for GW2 which is scheduled to be released on Sept 9, 2014. You will hear more info about it in the next few days.

I’m excited to announce that the September 2014 Feature Pack is on its way and will hitGuild Wars 2 on September 9!

We’ll be announcing the details of each of the features and events tied to the feature pack here on the Guild Wars 2 website over the course of the next three weeks. 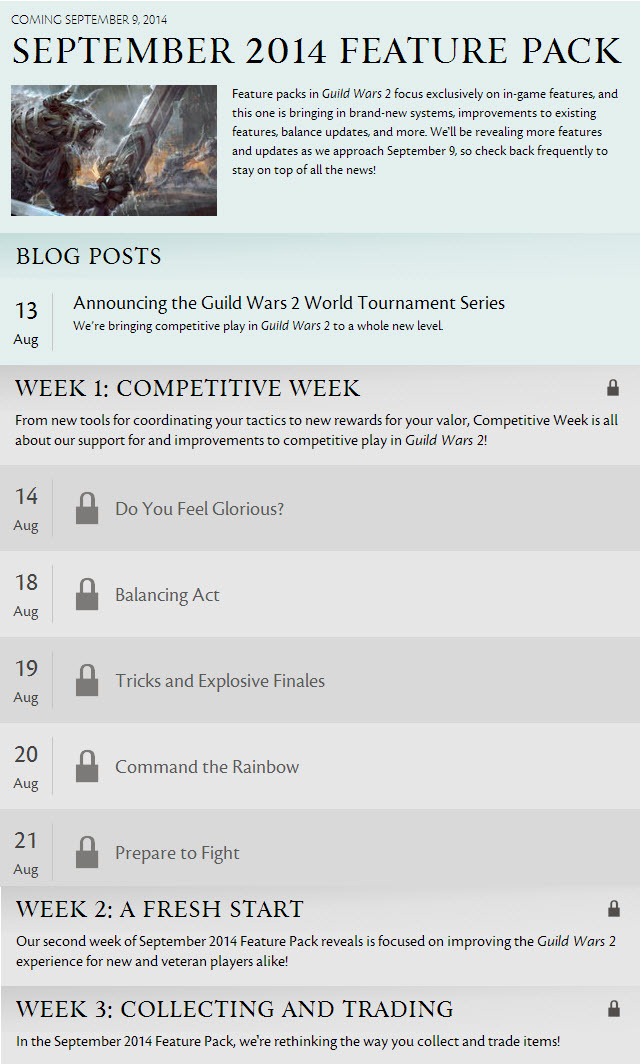 To kick things off, we’ll be focusing on new PvP and WvW updates. We’ve planned our Competitive Week to coincide with the Guild Wars 2 International All-Stars Tournament, which we’re streaming live from the show floor this week at gamescom in Cologne, Germany! Make sure to check out the streams later this week and watch as some of the best players from Europe, China, and North America battle it out for world supremacy.

For those of you dying to know what the future holds: Living World Season 2 will be going on break for a while as we count down to the arrival of the September 2014 Feature Pack. You can look forward to the return of Season 2 in autumn, and we’ll announce the start date for episode 5 after the feature pack has been released. Episode 4, “The Dragon’s Reach: Part 2,” will remain active until episode 5 is released, so you still have time to log in with a character and unlock this episode’s story content!

We hope you’re as excited about the September 2014 Feature Pack as we all are here at ArenaNet, and we look forward to seeing you in the game!

For now, I’m kind of curious about everything. At least it looks like we’ll be getting info every day until it comes out to keep us invested.

I hope there are more commander updates then just the color of the icon.

Looks like the commander update, probably with the oft-requested tag color options.

any info on SAB?

People have been saying that for over a year now.

Didnt get the impression this announcement insinuated that, or did I miss it?

destiny all the way

Ive seen people displaying the skin…….just curious what that is and how they do it.

Its been datamined and (although I don’t know the code), you can link the item. My guess is its a future gem store item.

The linkable version is of ascended rarity, so I’m guessing another long crafting chain.

As for the last time, HIPE TRAIN is going strong and fast 😉

They could always give us collector edition dances……..one lost treat from GW1. That would be nice.

Fresh start? One time stat reset? :O It would be awesome since I’m bored like hell playing my condi thief in pve

What do you mean by a one time stat reset?

Rethinking the way we collect and trade items.. So maybe, oh, I don’t know, MAKING ALL THOSE MISSING BUGGED OUT MEDIUM ARMOR PIECES OBTAINABLE?

“Collecting and Trading.” If this doesn’t include precursor crafting/scavenger hunt I’m pretty sure it never will become a reality.