To get these three achievements, it might be necessary to do this instance 3 times, one for each achievement. Thankfully the instance is fairly short and has no combat. Some of the info here are taken from intrepia on reddit.

Complete the party investigation without arousing any suspicion. Follow the 11 steps below.

1. First Noble is in the middle green circle, pick the following 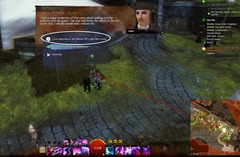 2. Second noble is to the east green circle, keep going through the options

3. Third noble is in the west green circle, pick the following options

4. Talk to Kasmeer and Minister Arton

5. Talk to Lady Claire next to Minister Arton

6. In the east circle you need to talk to a noble next to Countess Anise

7. Talk to this servant in the west circle next to Minister Estelle

You will get the achievement at the very end of the instance, after Countess Anise and Kasmeer have done talking.

Talk to Minister Estelle directly at the start and this will allow you to skip steps 1-3 in the Sneaky Sleuth achievement. Follow the rest of the steps in Sneaky Sleuth and you should get this achievement as well.

You will also get this achievement at the very end after Kasmeer and Anise’s long conversation.

Talk to the noble in step 1 and pick choice 3 four times  and then choice 1 one time. This should give you the maximum amount of suspicion (your bar won’t be full, if it is full you will get kicked out) and then continue rest of the instance like Sneaky Sleuth

Like the two other achievements, you also get this at the very end of the instance.

To get these achievements, you need to repeat the instance twice since two of the achievements conflict each other.

Essentially a freebie, when Taimi tell you to go take control of the recalibration device, don’t do it right away and instead use your weapons to attack the miniature waypoint. Do this a couple times and Taimi and Braham will start a conversation and reward you the achievement at the end of it.

Ignore the text in the video that tell you to kill him at 20 stacks, it is no longer necessary, as long the power bar in the event window is full.

The Mordrem Leyleecher will run around when is invulnerable and gain stacks of Ley Line Energy from the miniature waypoints. Just sit around and allow him to absorb energy from the waypoint. You just need to make sure to kill him when the power bar in the event window is full regardless of how many stacks of this buff he has. Usually if you don’t do anything he will get close to 20 stacks. Keep in mind that he hits extremely hard when he has higher stacks so you will need to dodge most of his attacks if you want to survive.

When the same dialogue window pops up, let Taimi controls the recalibration device. 1 Mordrem Husk will spawn from one end of the room and start walking to Taimi. You cannot let them reach Taimi for this achievement so you need to kill them fast and/or use immobilize/cripple/stun etc to slow them down. They have very little health and you should have no issue unless your DPS is very lackuster. The Mordrem seems to spawn either left or right side the room so I tend to stay near the recalibration device after each kill to reduce the running distance.

ideally, you want to kill the Mordrem Leyleecher right after so you don’t have to do this again and increase the risk of one getting to Taimi.

Technically, you can get all 3 achievements in one go but it is not recommended unless you are a super pro player. It is best to do Can’t Knock Me Down and Unlocked by Maw and Claw in one go and then the challenge mote achievement in another go.

Untouched by Maw and Claw – 10 pts

Complete “The World Summit” while avoiding all breath and claw attacks. This means avoiding or evading all the orange telegraph attacks from the dragon, including the big wide telegraphs and the orange circle telegraphs. You can get hit by the red circles from the tendrils.

There is a really good spot to the NE of the Pale Tree (opposite of where the dragon is attackable)  where most of the Dragon’s breath and claw attacks do not land. This spot will make the achievement tad easier and allow you to just focus on Can’t Knock Me Down achievement for the most part if you are doing these two together in one go. You will need range weapons to kill the tendrils while standing in this spot.

This spot isn’t perfectly safe as some attacks do land close by but they are fairly easy to avoid. In any case, it is a lot better than stand in the middle as that put you in range of pretty much all of the dragon attacks and you are much susceptible to RNG or lack of endurance to dodge.

Achievement is granted at the very end of the instance, after all the conversations.

Complete “The World Summit” while jumping to avoid all stomp attacks. Unlike the description, you do not have to jump. You can simply dodge and this is a much better method as you do not have to get the precise timing down since you are also evading attacks while doing the evade animation.

This one may take a few tries to get the rough timing down. The trick isn’t to dodge as soon as you see the orange telegraph covering the room. Instead, wait a few seconds (2-3seconds depending on your ping) and dodge roll right then. Another indication is that the telegraph will get a bit darker right before the stomp lands.

Watch the video under Untouched by Maw and Claw since it cover both achievements. Achievement is granted at the very end of the instance, after all the conversations. 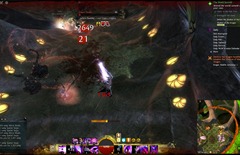 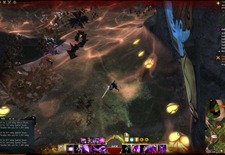 For the Mote Master achievement, you must interact with the blue Challenge Mote at the entrance of the instance and select Activate Challenge Mode. This will change one aspect of the fight later on: Mordrem Pods.

Mordrem Pods will spawn throughout the fight everytime the Dragon stomps and they will heal the Dragon in between the attackable phases. Players with high DPS or in a group might be able to ignore them entirely by killing the tendrils quickly between the phases. Otherwise, you need to kill the Mordrem Pods.

Mordrem Pods can be only attacked if you are encased in a vine first and gain a short duration buff from it. To get encased in a vine, you have to wait for a blinking immobilize debuff and a red circle that appears under you at the same time. If you chose to be encased in it, run to a safe spot. Otherwise, dodge to remove this debuff and this will prevent you from being encased. 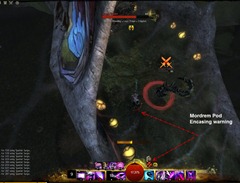 It appears that only a limited number of Mordrem Pods spawn if you do it correctly. Do not kill Mordrem pods until you get to the first burn phase that allow you to drop the dragon to 75% as otherwise the Mordrem pods will respawn indefinitely. What I do is start the fight as normal and basically dodge everytime I see the immobilize debuff warning me about incoming encasement. I do this until I get past the first burn phase that brings the Dragon to 75% and keep killing tendrils until 4 Mordrem Pods appear (this is the maximum number of Mordrem Pods that can appear) and then I will run to a safe spot and try to get encased in a vine. After I break out of the vine, I will start killing one of the pods and repeat this about 4 times until all the pods are dead. There might be an additional pod that respawn so you might need to kill 5 of them.

After taking care of all the pods, the Dragon should be back to 100% but you can just continue the fight as normal, dodging everytime you are about to get encased as there are no more Mordrem Pods in the fight.