SWTOR Gamescom 2014 Cantina Tour fan flash drive contents. Inside are pictures of decorations, guild flagship and Rakata Prime, the new flashpoint in 2.10. Special thanks to David who sent me these pics and Theho who sent me the Q&A 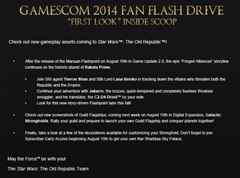 Q&A provided by Theho. Here are some key points