SWTOR New York Cantina Tour Flash Drive files with images of the new planets that are coming with Shadow of Revan expansion. 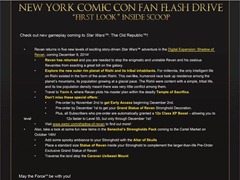 Rishi is the pirate haven planet and home to Rishii, a winged species. Notable characters involved with this planet includes Talon Karrde and Mara Jade.

Yavin 4 is the home of the fearsome Massassi warriors. The planet is involved with notable characters such as Jedi Knight Exar Kun and Sith lord Freedon Nadd and Naga Sadow.

Q&A taken from MillionsKNives on the forums.

What do you think of the state of PVP?

They’re always iterating and working on balance, and they think that the rebalancing they’re doing is going to do a lot to improve PVP and they’re going to be monitoring that a lot. They’re not happy with how things are now balance wise, and also are currently working on something to fix the issues with queue times for ranked (and probably regular) PVP.

People griefing by purposefully making others flag for PVP
Those sound like bugs and he’ll bring it up with the team.

Is anything going to be done to make it easier for small guilds to expand their guild ships?
It’s supposed to be hard by design. But, they are watching things and if it becomes a big problem then they might adjust things.

Can you increase Red Sphere drop rates from the Gree event?
Do you want it? (loud yeses from croud) You got it.

Will class quests be structured more like 3.0 class quests from now on?
They want to include as much class stuff as they can, and 3.0 is a testing ground to see our reactions and whether we like it. They won’t be doing full storylines like pre-50 stuff but they do want to include more of it in the future.

Taunt Resetting Commanders?
It may be intentional, but Musco wasn’t sure. Probably a question for [some other dev].

Why so long between Operations?
Looking ahead at the project plan they knew this was going to be a problem. However they only had two options that they could realistically go with. The first was to release an operation before the expansion, but have it quickly become obsolete come 3.0, and only have one operation available with 3.0. Or they could wait and have two for 3.0 but have a really long time without anything. It was really crappy and high end PVErs got “f*****”. It is something that they don’t want to ever do again (have that much time between operations).

SGRA in 3.0?
There will be SGRA in 3.0 during the story. These NPCs will be “player-sexual”, meaning that if you are a player no matter your gender you can romance them. There will be no companion SGRA though.

Will Colocoid Wargames become a HM?
He really wishes it was, but it won’t any time soon (if ever). Too much would have to be redesigned for a HM version.

Can they increase decoration drop rates on flashpoints without a HM (e.g., Colocoid Wargames)
He said to the person asking to PM him about it later because he doesn’t see why the drop rates shouldn’t be higher for that.

DOT cleansing. How does it work?
DOTs can not be cleansed…in PVP. He was going to hold off on telling us until the combat live stream, but probably should have told us right then.

Will there be new companions in 3.0?
No.

Has anyone guessed that you’re an employee of BioWare when playing on the live servers?
No. He always plays naive though, and even if he was asked he would say “I don’t know who that is”. An example of a normal conversion was, “so you heard what Musco wrote on the forums?”, “nope I don’t read the forums, but he sounds like a really smart and cool guy”.

How do you get on the closed PTS / how are you picking people?
Hilary Nicole is doing a lot of it and is at least partially pulling from fansites and guilds that have gotten in touch with her in the past. They are trying to pull people from all different play styles. Hardcore to casual, progression raiders to bad raiders.

I don’t remember how we got to this
The operations guys are probably the most proud team of what they do. The day that an operation launches they order some pizza and beer and sit in the office watching guild streams. They watch the good groups and the bad groups. They like to see how people are clearing it, what they’re doing that they didn’t expect, and what groups are getting hung up on.

The PVP team also watches a ton of streams. They would probably all be chatting with the players streaming too, but Musco doesn’t let them. He doesn’t trust a bunch of drunk devs chatting with players (irony?). They also read the forums a lot as well.

Which class is currently OP?
They have a recurring meeting every week for one hour where they discuss class damage. They look over live data and statistics from the game to see how each class is doing with the best players, the worst players, the average players, etc. Musco brings up a lot of player concerns with “this class is OP” in these meetings, which sometimes gets responded with things like “yeah, but do you see this graph right here”.

Will commendations be changed in 3.0?
(I’m 70% sure that this was being confirmed, not just speculation) Commendations will not be changing, we will be keeping the Ultimate, Elite, and Basic commendations.

Why the limit on NPCs / Legacy banks?
Performance. Not just local performance, if they put too much they will end up lagging the entire server. The devs want more space too. The first thing when the legacy stuff was released one of the devs logged in and complained about how limited the legacy bank storage was.

Can we place static stronghold NPCs to bypass limit?
Musco really likes the idea, but it seems too obvious that while it sounds like a simple idea, he suspects the reason they didn’t do it might be because it would be too complex to put in. Or they just didn’t think of it. He’ll bring it up with the devs.

Live server playtime
Plays a lot. Usually plays from when he gets home around 8pm until 2am. Longer sometimes on the weekends. 12 55s. Loves and leveled the Bounty Hunter first.

Marauders/Sentinels
All the time when playing on live servers they will leap in before the rest of the group. He’s gone to the design team and asked them what it is about them that causes them to want to jump in. As a tank he will whisper the healer to let the marauder/sentinel die if they pull first more than once.

12x XP
It may come back post-3.0. He had suggested it to the other devs as a perk for whenever you get a class buff unlocked in legacy. 3x per class buff. That or some other kind of legacy unlock.