GW2 Bandit Weapons Specialist Collections guide. This collections was added with the Echoes of the Past patch. 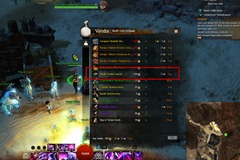 Purchasing it and consuming the item will unlock the Bandit Weapons Specialist collection under Basic Collections.

If you don’t have a very low level character, make a level 1 character and enter WvW. I entered the enemy server’s borderlands as the vendor is a bit easier to find.

There is a merchant called Karma Trader (Equipment Trader) and he sells bandit weapons for karma. For a level 1 character the weapons cost 160-300 karma each.

There are 16 weapons you can buy from that karma vendor. So just have 16×300 = 4800 karma and you should be able to buy all of it. The underwater weapons are not bandit weapons and do not count towards the collections.

Do not use a high level character for this as the vendor items scale up and the bandit weapons will be more expensive karma wise.

You can either buy them on the TP or craft them. Do not purchase the one with just Bandit Weapon as name. Instead, look for those with prefixes such as Hearty Bandit Weapons, Honed Bandit Weapon etc as they to be much cheaper. Here are all the available prefixes

To craft them, you will need Weaponsmith 125 for the spear, Huntsman 125 for the Harpoon Gun, and Artificer 125 for the Trident. The recipe for the Iron Imbued Inscription can be brought from the vendor with karma. 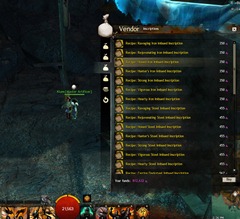 Too late!!!! I just lost 10 G for those underwater weapons

Just got them for 5g max, did you just buy the first thing you found? 😀

Mwaahaha, I already had all of these weapons from padding out my Wardrobe in the early days. ^^ Free bonus stuff for being a collector before it was popular!

Same thing, just bought the Bandit journal and got the reward chest 😀

@I’m making 87 USD an hour working at my floor. I was amazed when my neighbour told me she was averaging $90 but I see how it works now. I feel so much freedom now that I’m my own boss. This is what I do, ,

Thanks!
Done and dusted! 🙂 Bought the three underwater weapons for about 4g total.

well that’s nice for you, but these guides are typically geared towards helping the anyman gamer to do this content. with my 1.5mil karma i COULD easily afford the high level ones, but what’s the point? i’d never used them. waste of karma.

I thought Dulfy was a man.

Soo… My friend just tried to craft the harpoon gun. I sent him the exact same materials I used yesterday (rare inscription and the other two weapon parts) and he combined them, but it yielded a masterwork version of the harpoon gun instead of the rare one. Yesterday it worked for me – did they nerf/break it with todays patch? Did this happen to anyone else?

EDIT: I tried it out, and it still works for me, so it appears to be a weird kind of bug.

This happened to me, using Dulfy’s instructions… the dowel I crafted was yellow/mastery but I wonder if I was supposed to discover something with the rare crafting materials.. not sure what I’m doing wrong.

Becase the Iron Imbued Inscription cannot be discoved, you need to buy the recipe from the master with karma.

I’ll just hold off until everyone has bought their over priced under water weapons. The only benefit I see to completing this are the 20 slots bags and I got a crap ton of those from the Halloween Events 😀

Damn straight. All five of my max levels are now rocking 20 slot halloween pails. The event allowed players to acquire 20 slot bags at half the usual market price. What a deal!!!

you dont need buy it all, just simple craft it or buy inscription and craft weapons, i have tons of t5 mats from events, it cant be more easier

do it for the fun of it, if you don’t agree it is fun then don’t do it

I crafted the harpoon gun with materials listed above, but it wasn’t the Bandit one.

Are you sure you used an “Iron IMBUED Inscription”? and not the iron plated ones?

Dulfy please include in the guide that you need to buy the Rare recipe from the crafting merchant. Most people wouldn’t have this. By discovery you would only have the Masterwork item.

I mostly do defense events so it is around 10-20

i bought the Hearty Bandit Harpoon Gun and the Ravaging bandit Spear. Neither of them give me credit for the collections. Any help would be appreciated

You need to unlock on it