Note: Most of the livestream went over the discipline and utilities which you can see here: http://dulfy.net/2014/10/13/swtor-disciplines-calculator-swtor_miner/ 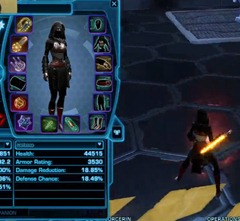 Then you are relying on it way too much.

Actually, I rarely use it.

Naturally they dont show off the pub side again….. The streams they do are so 1 sided.

Patience my friend. They did show both factions in the livestream, just give Dulfy time to upload the GIFs.

AH ya sorry about that lol.

Because the classes are so different right. 😛

And now your Republic will fall.

There are people who actually prefer pub side? That’s awful

If by now you don’t realise the faction/servers are very much even , you won’t make that statement again looking dumb asf. 🙂

Pfft. Leave it to the Pube to take a light hearted quip to heart…. And up vote his own post.

The Revivification/Salvation nerf is akin to the orbital stike/xs flyby nerf, with the exception that sorc/sage healers are the least powerful healers as it stands removing the need for a nerf to begin with. Seriously hoping they’re testing this enough, I don’t want two months of re-balancing the re-balances after the expansion releases

Sorc/sages are the weakest single target healer, but are the strongest AOE healer due to Salvation/Revivification. Datamining has shown that Sorc/sages are getting buffs to their single target heals to make them better single target healers, but this AOE is being nerfed healing wise. The Force cost is now 60 (54 with the new buff or 44 with new Resplendance buff,) down from 100 (91 with old buff.) (Note that you can stack Wandering/Roaming Mend with Salvation/Revivification to get double the AOE heal for 4 targets. Costs twice as much though or 10-20% more than currently and takes 2 GCD.)

When I am Sorc healing, i almost never use Revivication unless my tanks are grouped up, or the raid is taking high AOE damage. Most of the time, single target heals using Resurgence, Innervate, with Dark Heal procs are more than enough to heal any HM raid. If you spam Revivication too much you end up wasting your consumption procs needlessly. So TBH this change does nothing to my current rotation I am using on my Sorc healer. Also, Mercs most definitely better AOE heals than Sorcs are, hands down, no question. However, with the new abilities and rules, I imagine Sorcs and Mercs are pretty much on par in the single target, AOE heals. I hear Operatives are getting the nerf hammer the worst. But seeing as they were an “OP” healing class, this is not surprising.

but, but… I really loved project 🙁

Well, Shadow Tanks don’t get Psychokinetic Blast, if that’s what you were referring to. If not, then the rotation for Shadow Tanks is the same as before, only Cascading Debris replaces Telekinetic Throw! 🙂

ooooh, misread that. thank you!

Agreed. The animation for Ball Lightning makes sense because your lightsaber is charged with Force energy, while that isn’t the case with Shadows. I was hoping PK Blast would’ve been similar in appearance to Disturbance…. 🙁

just don’t know why jedi powers are all hadouken-like now. makes sense to be shiny when you use lightning as a sith, but not as a jedi.

I liked cascading debris animation, though 🙂 I enjoy being an earthbender jedi!

I think it looks silly, but not nearly as bad as “Depredating Volts,” which makes it look like you’re running out of juice/power or are short circuiting.

People really like Project? It always seemed a bit limp and anticlimactic to me. I love psychokinetic blast though – or at least I’m liking the looks of it, especially on a shadow/assassin.

I loved Project myself, esp with the talent that gave a second chunk to smack in there, felt pretty solid I always thought – shame that’s gone…

If Project will be stuck in players’ abilities list anyway, BW should make the most of it: add another rank at 57 and let players choose between Project and Psycho Blast.

There’s no change to the rotation, other than using whirling blow more freely.

So shiny. Less fps on warzones and operations 🙁

P.S. Always wondered, how shadows and sages are getting rocks on ships and stations?

I always pretend they’re pulling in space debris from outside the station/spaceship. Advanced compartmentalization technology allows the ship to seal off the rupture (where the debris entered the station), preventing explosive decompression as my Shadow pellets the station/spaceship with space junk.

“Death Field charges still go off on other player’s DoTs?

Only on other sorc’s DoTs. We want to make it go off on your DoTs only but don’t have the techchology to do it for 3.0.
”

ORLY? Because they don`t have the technology to make it a player side buff, right? Because it can`t be pulled from the boss debuffs. Yes, let`s talk bs, because why the hell not.

That is complete bs. I have an impression that you don’t even know what Death Field is. DF is the ability you place on enemy and not yourself plus it has no cast so precasting it is impossible

The original poster suggested putting the buff on the caster.

Sorry my bad, didn’t notice it like a complete idiot 🙁

So we just let it broken and if we get 3 sages / sorcs we just suck up cos “no technology”, right?

And what power does it change? It only moves it from Boss to self, and ticks ONLY on PERSONAL dots. 15 stacks that go down ONLY on damage done by PERSONAL dots, by being strictly on player, therefore not interacting with other player`s dots.

If it’s personal, if ticks on ALL dots on ALL targets, not just the ones hit by death field. You are indeed talking bs as announced.

lol, I’d be okay with that. Deathmark= Your next 15 dots tick for more 20% more damage:) That would make madness easier than it already is:)

What I don’t like is the increase in wrath to 4 ticks. That was a huge conversation before they went to the tick system from % chance. 4 ticks pissed everyone off then and they compromised to 3 ticks. Way to make that a temporary compromise and blow off the community at the next opportunity.

so it does:) Thank you my friend.

Then make it a castable on target only skill, just like they changed the smash and tick only for dots present on main target. But to come and say after 3 years that is impossible.. sorry, but that`s just a load of horse shit.

i wonder if the Vulnerable 5% will stack from the sorc and the assassin?

I think they’ve confirmed that similar debuffs will not stack. Like how armor reduction doesn’t stack; when a Jugg uses Sundering Assault (-20%) and an Arsenal Merc uses Tracer Missile (-20%) the target’s armor is reduced by 20% instead of 40%.

And quite a few of “perfectly balanced” healers, will simply switch to playing DPS. It’s much easier to blame others for wipe, than being blamed. They seem they’ve forgotten one thing though… there isn’t any “role-neutral” lvl 60 content (yet). Welcome to long-queue-waiting-queue-whine-fest. Enjoy.

Does anybody know what this lunatic is raving about?

Was there any mentioning in the stream if Roaming Mend is a “smart” heal?

They mentioned in the other streams that all AOE heals are going to be smart heals. While roaming mend is not technically one, it works only when damage is taken so the target has to have had some damage. They did not mention if it jumps to the closest, lowest percentage though.

So they finally got rid of the pebble throwing animations? Took them long enough.

No?!
TK-Throw still has the pebble animation.

Cascading Debris will only replace the Assassin Tank’s TK Throw.

Cascading debris looks amazing, and makes me proud to own a tank shadow.

The debris itself looks really nice, I have to say, but the player looks like she’s a very bad dancer when she’s channeling it.

PK blast looks cool but. I agree with Depredating Volts it looks terribad…. Pubs got nicer animation for assassin/Shadow

I can’t really agree. It looks like a hadouken; Jedi shouldn’t be tossing hadouken. They should have kept with the telekinetics theme and made it more subtle, like a gust of air accompanied by fine debris, or maybe a couple of larger chunks of debris thrown from multiple angles.

I agree on the volts, but I love the way Psychokinetic blast looks. I love the saber work animation. I also appreciate that they’re adding distinct animations to separate the advanced classes and their abilities.

Like I said, PK blast is just totally divorced from the basic “flavor” of the class. It’s a bunch of energy bolts where the Consular classes have always used telekinesis, either directly or to hurl debris.

am i the only one who wants to see that Serenity Strike?

I really hope that they change the animation for the shadow’s cascading debris. The rocks itself look awesome especially coming from multiple areas, but the shadow looks like he/she is doing a freaking dance. Not cool, Bioware.

Did they mention an ability which doesn’t require a target yet isn’t ground activated?