GW2 Fear No Evil Silverwastes Achievement Guide. This is a new achievement added with the Tangled Paths path that rewards 10 achievement points and the Dark Traveler title.

Getting to Hidden Depths

Hidden Depths or Tanged Labyrinth is a new subzone in Silverwastes right next to the story instance Into the Labyrinth. If you don’t know where that is, you can find a skirtt tunnel in Sharp Valley that will lead you to this hidden area with a new waypoint.

Hidden Depths is closed while the meta event Foothold/The Breach is underway. It is only open for ~16 minutes shortly after The Breach. You do not need to kill all the Mordrem champions during The Breach to access the area. When the area is closed, it is walled off by vines and the new waypoint is contested. 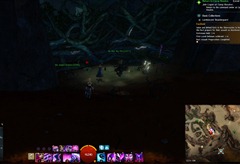 To unlock the Greater Nightmare Pod, you will need a key. There are two ways to obtain this key.

The Greater Nightmare Pod is located in the middle of Hidden Depths next to The Labyrinth waypoint. Follow this route to get to it.

Getting Essence of Nightmares

When Hidden Depths is open, you can collect Essence of Nightmares by running around in the labyrinth. The Essence of Nightmare drops from Lesser Nightmare Pods in the area. You need to hold down your ctrl key to see them. Below is a map of their possible spawn locations (they respawn when a new tier of event starts) 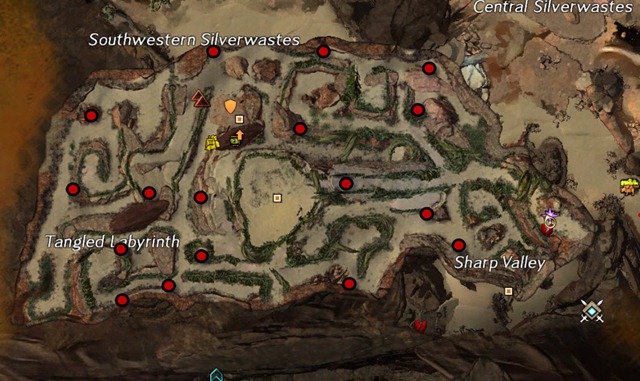 While gathering Lesser Nightmare Pods, you need to use the flowers in the area (marked on your minimap as cogs) to gain a buff that lasts for a few seconds. This buff will allow you move 50% and give you damage immunity from the Luminescent Lurchers that patrol the area. They will one shot you without the buff.

The gist of this area is basically run around to dodge lurchers while gather nightmare pods. The flower buff will help you survive a few seconds against the lurchers. You will die frequently.

You may not get all 25 Essences during one opening of Hidden Depths so you may need to come back a second time. It is also a good farming spot since all the pods are chests that drop stuff.

Found a mistake: right at the beginning of the article, it says “skirtt tunnel”. I don’t think its a skirt… 😀

And there’s a third way to obtain nightmare pod keys:
There’s a very little chance, they drop from Lesser Nightmare Pods. Yesterday I got one this way.

It is most definitely a skritt tunnel that we enter to reach the area, it’s even called that in game.

And now… read again what I wrote. Precisely wrote.

any info, what is possible drop from nightmare chest ??

I know, that the box with the carapax gloves can drop from it.

that place, running from flower pod to flower pod and opening those small chests along the way is actually quite fun. i had a blast trying to run away from the mobs and trying to revive people along the way.
there are also three tiers to this place: Tier 1 (100 chests) Tier 2 (150 chests) Tier 3 (200 chests)
also, after Tier 1 is done and Tier 2 begins a lot more of those Luminescent Lurchers spawn in the maze. despite reaching the chest counter and the maze going to those other tiers you can still find and open chests during these times.

Didn’t I see you complaining how disappointed you were with the update in a previous article?

How quickly some people are to judge…

actually yes, the update itself was extremely short which was very disappointing. though if i happen to find something fun out of it, being the maze where those Luminescent Lurchers one hit kill everyone while you’re running past them. that was fun.

Just FYI, I got a Greater Nightmare Key as a drop from one of the lesser pods. It seems to be a rare drop, instead of a single Nightmare Essence.

i received one from a lesser pod as well.

The map is a good startbut rhere are many more possible spawn loations for the Lesser pods than those marked on the map. Just run around like crazy and try to peak everywhere once for each tier during the nightmare. Happy hunting! 🙂

Soooooooooo how do you get Dark Traveler? You mention it once and never again.

You complete the achievement.

…yeah, but can you explain the phrase ‘while Hidden Depths is dark’? (sorry for thread necromancy)