You need to play 10 ranked arenas to get a rating

The Furious Weapon Set is a lockbox with every Furious weapon shell (lightsaber, offhand lightsaber, double-bladed lightsaber, assault cannon, blaster rifle, sniper rifle, blaster pistol, and offhand blaster). They are all Legacy bound so you can send them to alts.

Yo frogdogs I heard y’all like lockboxes, so we put armor lockboxes in the armor lockbox so you unlock any of the Furious armor appearances you want!
…
I mean yes, the same thing is being done with armor. /cough

The weapon lockbox has appearance shells, no stats on them at all so really their only value is how they look which factors in why they aren’t a reward. In addition, because the off-hands you mention don’t have visual appearances that can be changed (vibroknives and scatterguns are VFXs attached to the ability, and there visual representation does not come from the item on the character) making them reward shells as well seems like a superfluous reward. But if we get enough clamor for them we can look into making them in Seasons down the road. 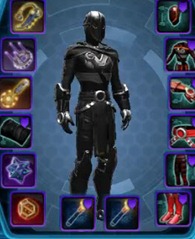 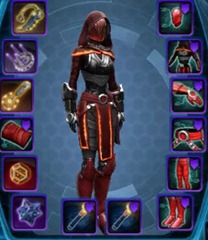 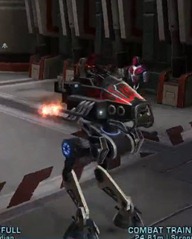 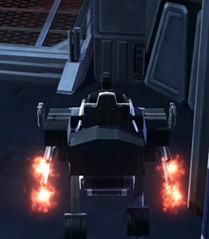 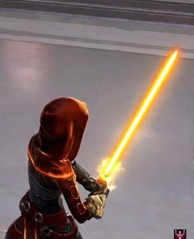 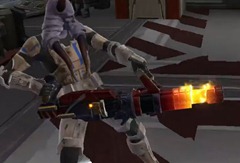 what rating do I need to get the armor?

Oh good, it’s the exact crystal color combination I hoped it would be, one I would never ever need or want. 😀 Warrior armor is badass though, I’m assuming the new tier will look just like it but without animations.

See this? You give the PVPers stuff and they just just complain. There is no making some people happy. THE COLOR IS PART OF THE THEME. They shouldn’t get crit, power, and end crystals they rant for PVP.

People displeased with the rewards will always be more vocal. Rest assured there are plenty of PvPers including myself who are perfectly happy with the rewards. Iazer was hardly crying about it. He simply said he wouldn’t use/want the colour crystal. He even went on to say he thought the armour was “badass”.

About the non-expertise stat crystals: Instead of being unhappy at other people getting things that don’t negatively effect you, try being pleased for them. Such a negative outlook on things.

Definatly the best reward i could have ever wished for. The armour is AMAZING, totally love it. I allways wished for a good looking legaxy armour, there it is.

Now if there only be a reward title for beeing best on your server, thatl be great

My point was that PVPers always find something to complain about. Even when that get rewards they shouldn’t ( the crystals I mentioned). They get unique items that there is nothing like in PVE. IE rancor mount and pet. You either had to buy off the GTN win one from the slots or get the op drop. You can’t get the drop on your own, and the slots is not true PVE. I’m not complaining I’m just saying their whining is getting old.

No one is whining. And anyway there are so many things in this game that you can only get through PvE. Don’t begrudge PvPers a few exclusive things. And as Franz said, you seem to be doing more whining about the PvPers than the PvPers are about the rewards…

No one is whining? I guess you missed what lazer said.

I’m over the moon about the colour crystal. I was worried they were going to give PvPers a colour that PvEers have been asking for for years :’)

Last one, do I need to get the rating with both classes (jugg and guardian) to get the two sets? Can I transfer them between my pjs?

Not sure if they change appearance when you change factions when swapping gear. If they do one set is plenty. If they don’t then you need it on both chars.

Does anyone know if the color crystals are bound to legacy?

put it in legacy weapons and it doesn’t matter 😉

Oh yeah thanks for the reply!

Is it ironic that I’ll NEVER EVER qualify for those Furious weapons?

You must be furious…

Do we also get other legacy bound offhands? Like generators and knives. Or do ounly characters with 2 pistols/lightsabers get offhands?

I know, thx. But does not answer my question 😉

Very curious wording, ” unique color crystal in all stats CURRENTLY available” sounds like we may get some new stat crystals in the near future.

Never going to get any of these…

Season 1 and 2 really burned me out as a merc in arenas but damn it I want those blaster pistols… sigh guess I’ll try to queue up for some games after all.

What I don’t like (not saying they’re bad) is the gear set. 😛

I like the effect on them, I just think they’re oversized and hideous looking.

all weapons I believe

DULFYYYY! If it’s all weapons then all this effort into getting 2 toon within the 1300 rating will be so worth it! I LOVE the weapons, love love loveeeeee.
(the awards wording says “SET”, so I am crossing my fingers).
LOOOOVE the weaponzzzzzzzzzzzsssssssszzZZsss

Do you know if the weapons are BoL or BoP?

still so damn hard to get ranked queue…

Is the PVP Weapon and Armor Legacy? Like if I pvp with my merc I can send the lightsabers to me mara?

Yes they are bound to legacy

Pitty ranked is dead on my daed server…

Does the armor come already with armorings, mods and enhancements? Or do they all come empty?

It would be logical for two

That’s BS. they should make the S2 gear legacy!

Dulfy do you know if the Mount was BOP or Bound of legacy?

Hey dulfy does that mean the weapons are legacy?

Yes they are legacy

Sheesh, spammers posting this stuff everywhere.
Like anyone who plays a MMO would come here looking for greater income.

That should be banned Dulfy. I verified it asks your credit card info lol.

Be aware dont use that link.

So how does the ranking actually work, is it your highest rating or what you have when it ends?

The one you have at the end, as far as I know.

Same as previous seasons, and as in multiple dev posts: It is based on your highest rating of the season; current rating is irrelevant.

Thank you so much for that information.

I really want that Assault Cannon, without the fire…

I was wondering if this was the sneak peak at the new top level gear, thanks. I’m glad that I’ll be able to find that cannon, it’s a practical designm unlike many cannons that they’ve put out, and it’s small enough to not look like I’m carrying an artillery gun on my back.

Finally! The Republic has a better fashion designer than the Imps!

Are only the PVP reward armor sets legacy bound or could it be that the token future pve armor is also legacy bound?!

Aand what i need the highest or they look the ranked raiting at that moment?

I think it’s for highest, like the other two seasons, but I don’t know it exactly. If they change it, they will f*** a lot of ppl.

Dulfy! It’s official! Check out the swtor pvp forums! 😉 ALL THE WEAPONS plus OH saber and OH blaster pistol.

hey dulfy do we have the stat breakdown on the new crystal?

sorry looking for clarification is it a +41 for one stat or +41 for crit,end,exp and power

I’m not interested. I swear it got to be a child who was designing these weapons in game, they are so goofy and stupid looking.

So I got to T1 but a friend convinced me to keep queueing a few days later and I did, now I’m 1612 — I’m still going to get my T1 Reward, right? Like I know the forum post said your highest rating but I’m just hoping I haven’t missed out a thread here where they changed it to current instead of highest.

They are back now 🙂