SWTOR Revanite Commanders Temple of Sacrifice Operation Guide. Only storymode guide is currently available. Hardmode guide will be added at a later date. 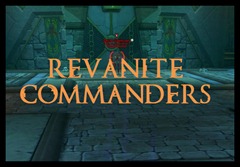 Revanite Commanders is the fourth boss in this operation. It is a bit chaotic fight with 3 bosses and tons of adds. Initially at the start all the bosses would jump away and you will be clearing adds for the first 30 seconds. After that, each boss take turns to jump down and call on more adds. At the end, all 3 bosses jump down with more adds and you have rather chaotic battle. Kill the adds and burn down the bosses one by one.

Fairly dangerous add that should be prioritized first. The Saturation Fire frontal that they cast hits extremely hard with over 4k damage per second. Stay out of their telegraph. When they are not casting Saturation Fire, they are spamming Three Round Burst which hits for about 3-4k dmg per hit. 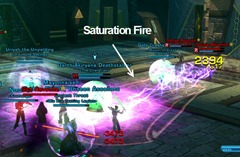 Their have the Tenacious Saturation buff which prevents their Saturation Fire from being interrupted but you can grapple or crowd control them to step it. 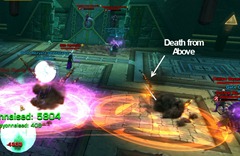 These guys have the Defensive Roll buff which reduces their AoE damage intake by 30%. They do a Force Leap and some melee attacks but isn’t as dangerous as the other two.

Tanks can taunt Deron and receive all the Tracer Missiles on themselves. This will of course increase the amount of damage they take from Guided Missile Volley but reduce the amount of raid damage. 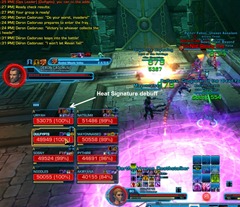 Sano Thrica’s main ability is his Energy Reflection Field. This shield will reflect 25% of your damage back to you if you are not inside the shield when you attack him. This is something to be aware so you do not kill yourself with your own damage. Other than that his main abilities are frontal Scattergun and Disrespectful Kick. He should be turned away to prevent him from cleaving the raid.

Like the Sith Revanite adds, he also have the Defensive Roll buff that decrease the damage he take from AoE attacks by 30%. His main ability is Soaring Smash, a purple circle that follows the target around and explode after a few seconds for ~12k damage to anyone caught in it. Kite the circle away from the raid if you do get the circle. Seems to be casted on those within melee range. 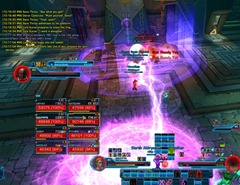 Phase 1 (0-30s): Six adds (2 of each type) will spawn immediately to keep you busy. If your raid is clustered together, move away from each other to avoid eating Death from Above or Saturation Fire from the adds. As a general rule, Sith Revanite adds will spawn from the left door, Mandalorian adds from the middle door and Outlaw adds from the right door. This first phase is a bit heavy on healing due to all the AoE damage from the 6 adds. 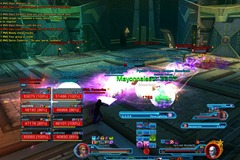 Phase 2 (30s): Phase 2 starts 30s into the fight. A random boss will jump down for about 30 seconds. Adds will keep spawning as well with about 15s between the waves. Generally, you can expect an add wave when one of the boss jumps down, 15s after they jump down and then when the boss jumps back up. The add waves can be anywhere from 1-3 adds.

After the first boss jumps back up to safety. You have a 25-30s window during which another wave of adds will spawn. The second boss will jump down after this break and this sequence is repeated until each boss have jumped down twice (order is random).

Phase 3: Once each boss have jumped down twice, they will start saying “Lets finish this!”, “We must end this now!”. This is the trigger for phase 3. In Phase 3, all 3 bosses will jump down and adds will keep spawning every 15s. You can kill the bosses one by one, picking the lowest HP one first.

Spread out when you enter the room to avoid getting carpet bombed by the Death from Above and Saturation Fire AOEs from the six adds that will spawn. Tanks can AoE taunt the Outlaws and Sith Revanites but the Mandalorian Revanites are immune to taunts. Priority are on the Outlaw and Mandalorian adds.

Finish off the adds as best as you can and get ready for one of the bosses to jump down at 30s into the fight. Adds will keep spawning every 15s so try to pile them up with the boss to AoE both down. You need to endure  6 such jumps, each lasting around 30s. Make sure you have plenty of resources for the third phase as it can get very hectic.

Once you transition into phase 3 with all the bosses down, try focus on the ones with lowest HP. There is no penalty for killing them one by one so your goal should be reducing the amount of incoming damage. Adds should be killed as they spawn but if you are on the last boss you can probably just burn the boss and ignore the adds.

There appears to be an enrage at 9 mins on SM. We figured we should test that on our first attempt. 2nd attempt and boss was down. Pretty easy fight and looking forward to HM:)