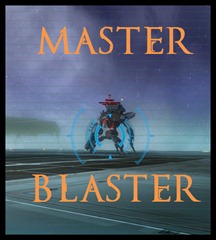 Ravager Ultra Scatterblast is a fairly large frontal knockback that is casted fairly often (9s CD). Tanks will need to face him away from rest of the group to prevent this knockback from cleaving the raid. 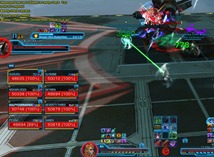 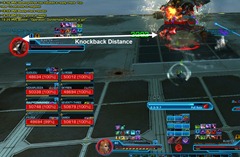 Four random players in the raid will get an explosive probe attached to them. These explosive probes lasts for different durations but will explode pre-maturely if two player’s probe circles overlap. In addition to the explosion, there is also a knockback component. The cooldown on this ability is around 25 seconds. 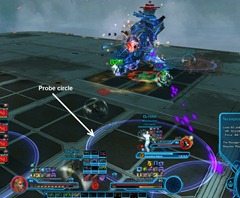 This ability drastically reduce the amount of area you have available to fight Blaster. It will cover the platform with giant orange circles. The orange circles deals damage but not enough to kill you in 1-2 ticks like in hardmode. Nevertheless, you should not cross the orange circles unless you absolutely have to. This mechanic also increase the difficulty of Resonant Explosive Probes as you now have a much smaller space to work with.Tanks will also need to watch that they do not get knocked deep into the orange circles.

At around 54% or so, Blaster will call down Master Astromech Droid to trigger transition into phase 2. The offtank will need to grab the Master droid when it arrives. 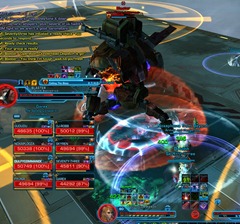 Both Blaster and Master have this shield ability that they switch back and forth. When this shield is active, they take 90% less damage so you are forced to attack the non shielded pair. To know which one of the pair is shielded, look for a blue shield around them or look it on the buff bar.

This is one of Master’s attacks that is fairly deadly to melee. Anyone caught inside will receive a DoT that tocks for heavy elemental damage over time. Master Droid will follow the tank around when he does this spinning attack but if the tank have any movement increase abilities they might be able to reduce some of the damage.This attack has a cooldown of 32s.

Channeled Beam attack  that not only deal damage but also apply a stacking debuff called Deepening Wound that increase the target’s damage taken from this particular attack by 100% per stack. Fortunately, this beam can be blocked by other players to prevent the tank from getting all the stacks. When another player step in front of the beam, they will receive the stacking debuffs and can step out once the damage get too high.This attack has a cooldown of 24s. 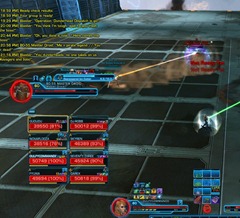 After fighting Master and Blaster for a bit, both droids will shield themselves and Master will start casting Rain of Pain, a 5s cast. At end of this cast, Master will disappear into the air and start carpet bombing the platform. You will need to run to a spot not occupied by the red bar as the red area will receive a bombing in a few seconds. This ability has a 85s CD so you are unlikely to see it twice in one fight. 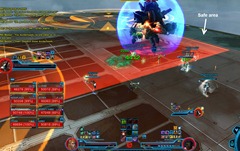 These two mechanics are only seen in phase 3 once Blaster finish casting Rejiggering. Master Droid will start channeling a frontal cone called Ion Pulse Wave. This attack applies a special Charged debuff to you that is actually beneficial. This debuff will Magnetically cline you to the deck at the cost of 15% movement speed reduction. The tank that is tanking Master will want to turn Master around when he channel this so that everyone get this debuff. 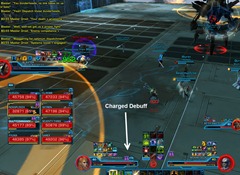 With this debuff, you won’t get knocked off by Blaster’s special Ravager Electro-Pulse Nova 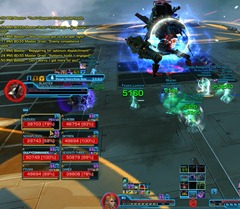 Once you bring Blaster down to 9%, he will self-destruct with a giant red circle. There is also a huge knockback that will hit everyone on the platform. Make sure you plant your back to a wall or you may get knocked off.

Main tank need to face Blaster away from rest of the raid and assign that direction as tank only due to the frequency of the knockbacks. There are only 3 mechanics to handle in this phase so it should be a rather easy one. Avoid stepping in the orange circles from the Thermite Mortar or other player’s explosive probe circles if you have an explosive probe on you.

When Blaster starts to cast Calling the Boss, this will trigger the transition into Phase 2. Master have only around 100k HP but he is constantly protected by the Overpowered Deflection Shield so you won’t be able to do much damage to him. DPS whoever doesn’t have the shield. For the Overpowered Ion Cutter attack from Master, have a DPS or two step into the beam to get some of the Deepending Wound debuff stacks. This will prevent your offtank will eating too much damage from this attack.

When you see Master casting Rain of Pain, get ready to move out. You do have a few seconds to get away from the red areas before they get bombed so it shouldn’t too difficult to avoid the damage.

Once Blaster starts to cast Rejiggering, this signal the transition to phase 3. Whoever is tanking Master will want to turn it toward the raid so that everyone get the Charged debuff from its Ion Pulse Wave attack. This debuff will make you run 15% slower but you won’t be knocked off by Blaster’s Ravager Electro-Pulse Nova that he is spamming over and over.

Dulfy: possible error: According to guides, both this and Revan drop mainhands. I’m going to guess this boss actually drops an offhand, yes? (seems in keeping with DF/DP loot tables)

Also, I’ve gotten the itemization of each token item. This spreadsheet lists them https://docs.google.com/spreadsheet/ccc?key=0AocmtBO8DmSddGFXVDg5SUd5OHE2S3NYcG5kdGFsb3c&usp=sharing

I had no idea I was taking that much damage from the little guy. You really were healing the crap out of me. Guess i know what not to do next time lol.

I can indeed confirm that this boss drops and offhand, not a mainhand. Cleared it tonight.

If you watch dulfy’s video, you see the loot at the end: there you clearly see it is an offhand. No confirmations necessary.

Either wait, it doesn’t hurt to note a typo and confirm independently.

Must be copy/paste error from another guide, should be corrected now

So many familiar voices xD

Is there a bug on this boss? In Phase 2 after Blaster reaches 23%, both Master and Blaster gets the Overpowered Deflection Shield and we can’t do any dmg to both of them.

Edit: Both has this shield and no one loose it until we are dead.

Use a 3-1 DPS Split, we went with 3 RDPS on master and 1MDPS on Blaster

Dulfy or whoever can answer. Which is the first operation for 60? Is it Ravagers or ToS?

Ravagers is far easier than ToS – our guild was killing everything in Ravagers SM without issue (even winging it for the last boss), though in ToS we had to do a couple of pulls for Sword Squadron and for The Underlurker

Can anyone confirm the drop rate in 16 man. I saw it reported that 16 man is dropping less loot than 8 man, and didnt see a fix in patch notes.

Completed the raid today for the first time in 8SM.

Had a bit of trouble with Bulo and the two droids. Otherwise we were fine.
We winged Coratanni without Dulfy’s great guides, and were able to down the boss in 1 attempt with only a DPS and Healer down at the end.

In case people are having trouble with the last boss, and cannot complete the OPs, here is a short summary that has been posted by a reddit user.
https://www.reddit.com/r/swtor/comments/2o8qd0/the_ravengers_sm_coratanni_kill_video/

We found that the green telegraph of the bird is not as lethal as the yellow telegraphs of the adds that begin to spawn halfway through the first phase.

Dropped an unassembled Massassi Chestpiece and a 192 OH.

Nice, someone used my thread. 😛

While undermanning ravagers my impguild found out that the enrage timer is 9 minutes.

We still killed it but the enrage is not really survivable for more than a minute or so. BO-55 Master droid will start hitting you for 14k-26k per overpowered charge arm (4x with 1 second interval). Not that an enrage is meant to be to survivable but still …