Torque is the 3rd boss of Ravagers and he is on board a tiny ship. His objective is to destroy the ship by breaking down the consoles. If he manages to break down all 4 consoles, the ship crashes and everyone is killed. Your job is to save the ship and killing him by repairing the consoles that he destroys and killing the adds he summons that targets the repair droids.

Two random squares will go up in flames, making them unuseable and damaging anyone standing in it. Repair Droids seems to be unaffected.

There are 4 consoles around Torque. They show up with green nameplates and have name such as

Every 45 seconds, starting with 0:45 into the fight, Torque will walk up to a random console and start channeling WOOKIE RAGE. This is 3.0s cast that will break a console at the end of the channel and knock everyone back.

If all 4 consoles are destroyed, the ship goes down and everyone dies. To prevent this, you will need to employ the repair console in the back to deploy repair droids.

At the back of the room are two consoles you can interact to summon repair droids. They have a 30s cooldown so do not summon the droids unless there is a console needing fix.

There are two varieties of Repair Droids: Repair Astromech and FIX-4U. They are identical in functionality with just a different name to help distinguish the two. Unfortunately, they appear as red to players and have very little HP (~2k). Therefore, they are super susceptible to attacks from adds such as Shoot Lasers. Make sure you do not use AoE skills near them or have auto targeting turned on as doing so can cause you to accidently kill the repair droid. 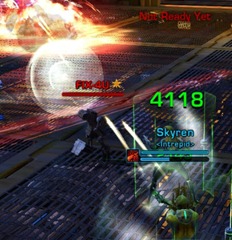 These droids will head automatically to a broken console to repair it. Therefore try to clear out any Flame Turrets around the console before summoning it.

Shoots Lasers and Dangerous Fire Device are the two adds that Torque summon fairly frequently (about every 30s). Shoots Laser is particularly problematic as it has a very long Laser Beam attack that can take shots at the repair droids from far away. You should always clear the Shoot Laser adds before summoning the repair droid as failing to do so can cause your repair droid to die instantly on summon. 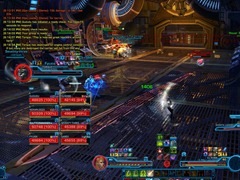 Dangerous Fire Device mostly affects melee since it tends to spawn right next to Torque. If it spawns next to a broken console, it will kill any repair droid that are trying to repair that console. Ranged DPS should help kill them if possible. 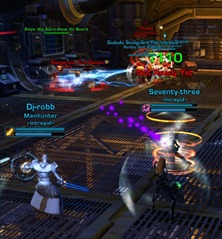 Two random floor tiles will burst into flames at about 25 seconds into the fight. They will deal periodic damage to anyone standing in them but does not seem to harm the repair droid. This seems to occur every 30-40s after the initial one at 0:25. While this mechanic doesn’t seem too punishing in storymode, in hardmode it can kill a player in a few ticks so raid awareness is a must. 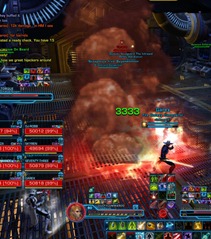 This is a DoT applied to a random raid member (usually non-tanks) that immobilize and stun them. The first one is around 0:40 and then it repeats every 30-40s after that. The player under Magnetic Clamp cannot use any abilities so a healer will need to cleanse them. The combination of Magnetic Clamp and Floor Vents can be dangerous if not cleansed quickly. 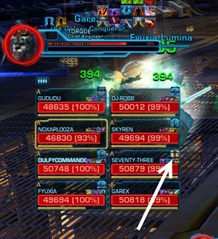 Tank swap mechanic. The main tank will receive a knockback from Torque and a debuff called Sick of You. This seems to first occur around 25s into the fight and then every 45s. Under this debuff, you will take more damage so you will want the other tank to swap. 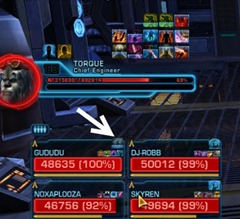 You have 45s to burn the boss before he can destroy any console. Watch out for Floor Vents and Magnetic Clamp if you are a healer. Once Torque breaks a console at 45s into the fight, clear out any remaining Shoots Lasers/Dangerous Fire Device before having a rDPS or healer summoning the repair droid in the back. Make sure rest of the raid stop their AoEs and do not accidently kill the repair droid. If the repair droid is killed, you can use the second console. The cooldown on the console is around 30s so even if both repair droids are killed, you still have plenty of time.

Make sure to tank swap when you get knocked and receive the Sick of You debuff. Melee pay extra attention to the Dangerous Fire Device.

Tank swap mechanic debuff name shows that the boss is a fan of GWAR.

I saw a great video with him in it recently. He read Goodnight Moon (or what wound up being his version of it).

“Ships We Don’t Have Onboard”

LOL @ Shit We Don’t Have Onboard

That would be hilarious if they actually called it that.

Regrettably, it doesn’t appear that EA/Bio wants to lose the game’s “Teen” rating, so…

they still could of done it, but censor it.

OK, if I understand this fight right, the consoles will be destroyed, their is nothing we can do about that. The repair droids are supposed to come out and repair the console AFTER all the adds are taken care of. Am I wrong?

We usually wait for the first add spawn AFTER the console is broken, kill that add, THEN spawn the droid.

So after completing Bulo finally thanks to the nerf with a 16 man GF, I tried with three different groups to kill this guy – just way too much fire in the room for a pug group in my opinion for this to be doable. The group was relatively well geared (the majority of heals and DPS were 50k HP +) Don’t think we managed to get him below 40% in any of the groups.

that is problem there, when did health become the determining factor for heals and dps

It’s not. Just a basic guide to say that people aren’t getting around in 162 gear attempting ops that supposedly require 186 only..I didn’t say they were top their progression raiders just cause the hp was 50k plus…I was just pointing out that if they expect pug groups to be able to complete the ops that this won’t happen much based on the current difficulty.

I’ve pugged it many times. tbh, I don’t find it that hard at all so long as people have half a brain.

Is there an ETA on when the Hard Mode versions of Torque guides onwards will be released?

Not too sure, I am not writing them as there is a guild that is taking over the writing with more details and multiple PoV ideos. It will be whenever they finish i guess

Teach me to solo