Introduction to the Rage Juggernaut

Rage is currently one of the few AOE specs in game, how ever with changes to the spec in update 3.0, the spec is now capable of doing a pure single target rotation to allow for added damage by sacrificing AOE in the rotation. This allows you to swap between a single target burst and an AOE burst depending on the situation. The further change to Rage also has shifted the rotation a bit, making it similar yet also different than the 2.0 iteration you may or may not have played.

The below utilities are outlined to make the most of your Raid Utility and PVE environments. Things such as cleanses aren’t necessary and are better served for speed boosts, damage increases and buffs to your allies.

Rage revolves around buffing yourself passively in rotation to allow for a massive hit at the end of each ‘cycle’. These cycles remain the same but if you have no idea of your passives then you won’t know how or why the cycles are there in the first place.

The opener for Rage is rather simple and never deviates regardless of scenario. Enrage frontloads your Shockwave and Force Charge grants Dominate, allowing the following Raging Burst to crit. Saber throw grants Vindicator’s Critical Bonus, giving your first Furious Strike an autocrit. 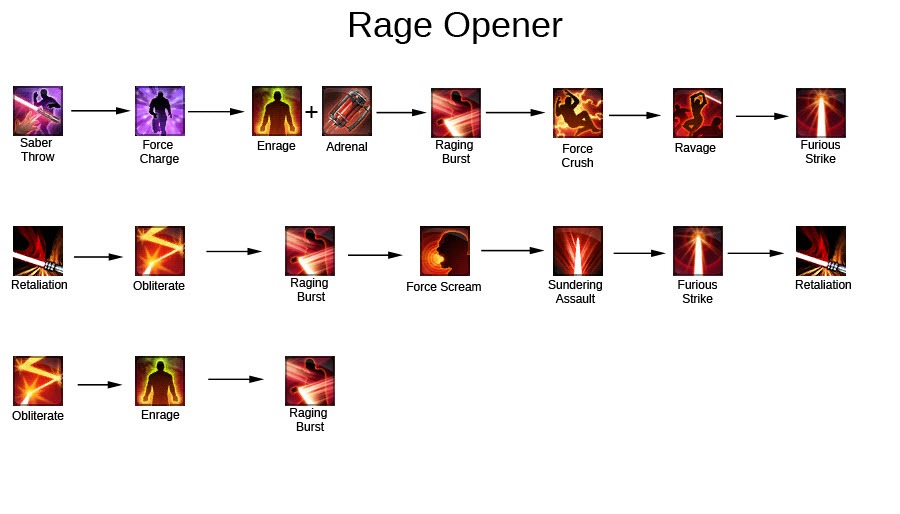 As I mentioned above, Rage follows ‘Cycles’. One cycle ends and another begins, each cycle ends with a Raging Burst (or Force Smash depending on if you want AOE). Each Cycle subsequently bleeds Rage or lack there of into the next cycle, thus meaning you have to preemptively manage yourself or you may find you’re running too low on your next Obliterate.

There are 2 types of cycles. I like to call them the “Enrage Cycle” and “Ravage Cycle.” These cycles follow one another, when an Enrage Cycle ends, the Ravage Cycle begins, so you can keep track of which cycle you’re supposed to be doing on the CD of Force Crush as it’s the first ability used in the Ravage Cycle. 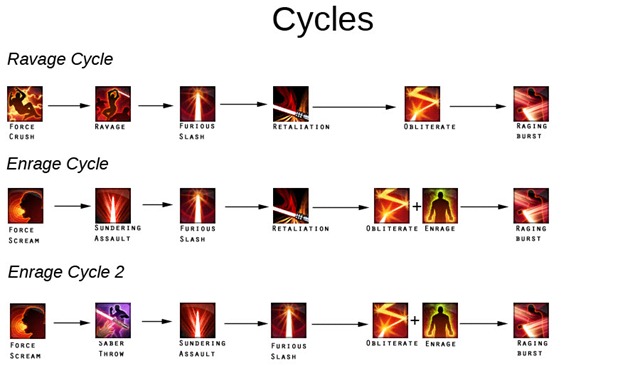 The reason as to why there are 2 Enrage Cycles is that the over use of Enrage Cycle 1, the one with Retaliation will eventually drain your resource due to its cost, meaning an eventual Obliterate will fail. To stop this from happening, substituting a 2-Rage cost for 3 Rage gain with the use of Saber Throw means you can proceed with 3 more Enrage Cycle 1’s until an Enrage Cycle 2 is required. The loss of DPS by subsituting in Saber Throw for Retlation, is more than made up for by the use of Force Scream being used more frequently.

With the large amount of Rage from your Enrage Cycle 2 bleeding into your next cycles, this opens up room to allow Vicious Throw. Rather than subtracting 2 Rage from your current budget, you’re adding 3, this will allow you to add an extra 1 cost to your next 2 Retaliation areas in the coming cycles to use Vicious Throw, so 2/3 Retaliations become Vicious Thows, the 2nd Dispatch of course is present to due to the CD on Vicious Throw now allowing it be used frequently. This helps not burn you out and will allow you to increase damage due to how powerful Vicious Throw is in comparison to Retaliation. This how ever means that you will need to use Enrage Cycle 2 more often to compensate for the growing cost of your rotation.

What was the minimum hit of your Raging Burst/Force Smash? You’ll see a rough deviation of 4000 max due to Relic and Adrenal windows. If you land a 12,500 Raging burst, your minimum should be the low 8000’s. If you have hit far lower than this 4k deviation, you’ve messed up a Shockwave window at some point or another.

Are you clipping Ravage effectively at the 0.3 second mark? Clipping Ravage with Furious Strike secures it inside the Cascading Power window.

Is your Raging Burst/Force Smash average output higher than 10secs? If so, you’re delaying it or your rotation is too slow.

So looking at the parse, let’s note some things. some are obvious, others are not.

Raging burst makes up the most of your damage, about 20% to 22% and of course has a 100% crit chance due to the rotation being successful, you’ll also notice that the number (24) matches up to the (23) Obliterates in rotation and (1) Force Charge in opener, the dummy died before the 25th Raging Burst, hence why there isn’t a 25th listed.

Looking at the parse, you can see the APM is 40.2, well over the required 39.4. What increases your APM is mostly the use of Adrenal and Combat Focus, both of which do not respect the GCD as such should be pressed at the same time as your following ability, regardless of what it is.

You’ll also notice a lack of Smash in this parse because it deals weaker damage and its buffs are consumed by Raging Burst, hence there is no reason to use it in single target.

The number of Saber Throws will be roughly half that of Force Scream, so every 2 Scream Cycles will result in one Saber Throw cycle.

The number of Furious Strikes is equal to that of Retaliation, each activation in succession of the other, used as a pair, the 7 Rage is always present when this duo is needed rotationally

My in game name is Artorias/Sinais, depending on which faction you’re on of course. You may have seen me on the forums or /r/SWTOR as Luckygunslinger. I raid with Aisthesis on the Ebon Hawk and have been playing Juggernaut since 1.3 and DPS spec since 1.5 all the way until 3.0. I mained Rage pre-Vengeance Buffs in 2.6 and have decided to return to it since a lot of the minor issues have been fixed. This guide was written through the testing days of SoR when the spec was changing and it was helping to keep track of the changes while in turn helping others get an idea of this slightly versatile spec.