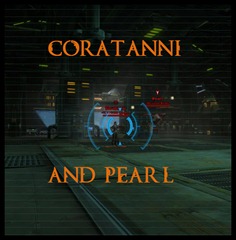 Coratanni fight is divided into two distinctive phases. In the first phase you will fight Coratanni and Pearl. This is a two tank encounter with an interesting Ricochet Shot mechanic to prevent players from standing too close to each other. You will want to get Pearl to a low% before pushing Cortanni to 19% as she will escape and cause Pearl to enrage (if you kill Pearl first, Coratanni will enrage). Use the escape pod to get to phase 2 where you will face off against Ruugar. Avoid stacking too close as Ruugar throws out AoE Corrosive Grenades, Land Mines, and explosive Death Mouse droids. If Ruugar holds someone hostage, stop attacking Ruugar or you will transfer all the damage to that player. Fight is finished at 7% when Ruugar self-destructs the ship.

Both bosses will need to be tanked so two tanks are required here. There isn’t any tank swapping mechanic on storymode but Pearl will become immune to taunts from time to time and go after random raid members. The tank will need to grab Pearl back.

Cortanni’s filler attacks is mostly Ranged Attack while Pearl’s are a combination of Swoop and Peck.

Ricochet Shot is an interesting mechanic. Coratanni will target a random raid member and casts Ricochet Shot, which has a cast time of 2.5 and a cooldown of 10s. The ability itself doesn’t seem to do any damage but it applies two debuffs on you: Double Down and Split City.

Suppressive Fire and Acid Spit are two telegraphed conal attacks from Coratanni and Pearl respectively. They should all be pointed away from the raid to prevent unnecessary cleaves and raid damage. 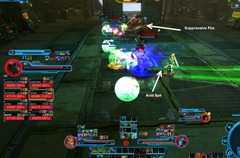 About every 30s starting at 30s into the fight, Coratanni will apply the Flame Grenade debuff to everyone in the raid. It ticks for about ~4k damage every 3 seconds. If your raid team is decently geared, you can ignore this as it doesn’t do a lot of damage. Otherwise, you can have one person go to the panel in the back to spawn blue circles in the room. Step inside the blue circles to remove the Flame Grenade DoT. 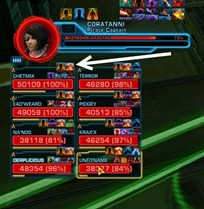 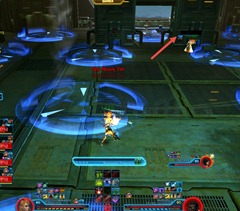 Four cannons will activate from a specific place in the room when Cortanni reaches 66% HP and every 20s after that. Their telegraphs cover the width of the room so you will need to find gaps between the telegraphs to avoid damage. They do quite a bit of damage and has a knockback component if you do get hit. 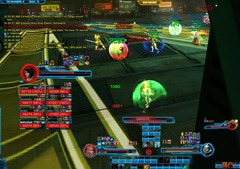 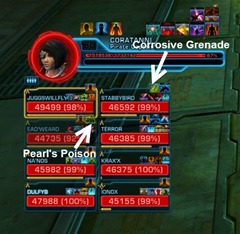 The damage these DoTs deal is fairly low on storymode. Unsure if either of them can be cleansed.

Once Coratanni reaches 732192 HP (around 18-19%), she will stop taking damage and run to the escape pod to cast Activating. There is nothing you can do to stop her but you will need to kill Pearl ASAP as it will enrage in a few seconds and deal 300% more damage. You want to bring Pearl quite low but not enough to kill it and then bring Coratanni to that HP mark to enter the next phase of the fight.

You can survive a few seconds with enrage if your raid screwed up but it is not recommended as you may lose players for the next phase and stealth rez is not reliable here. 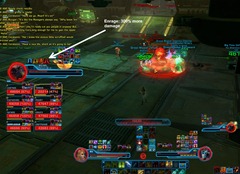 Once you killed Pearl, have everyone click on the Escape Pod to transition to the next phase.

Ruugar will drop Land Mines (yellow circles that turns orange) on top of raid members. If you step into these circles, you get a burning debuff. These circles can pose a problem for melee but for ranged they are fairly easy to avoid. 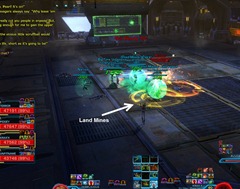 Ruugar also have an AoE attack called Corrosive Grenade that target a single player and anyone around them. This grenade can be cleansed but it is on a 15s cooldown so it is fairly frequent. To reduce the amount of players that get this DoT, have everyone spread out. 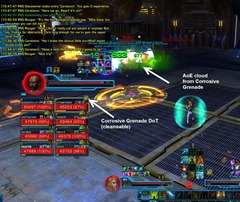 To further encourage everyone to spread out on this fight, there is  Death Mouse droid that spawns on a 25-30s timer and will run to a random person in the raid to explode on them. The explosion will hit for about ~20k damage so if everyone is stacked up, it is quite a lot of raid damage. 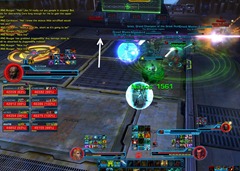 This is potentially a tank swap mechanic in hardmode but it is ignorable in storymode. Ruugar will apply a stacking Corrosive Dart dot to the tank with main threat and follow it up with Cull. Cull will cause any poison effects on the target to also deal damage. So if you are the main tank with stacks of Corrosive Darts and possibility a Corrosive Grenade, Cull will hurt quite a bit.

The damage increase isn’t noticeable in storymode so we do not do tank swaps here. 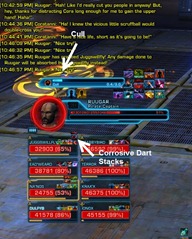 Hostage Situation is a fun mechanic. It is a debuff applied to a random raid member for 5s with a 60s cooldown. Whoever has this debuff will absorb all the damage done to Ruugar for the duration of this debuff. This is a raid awareness check on your DPS but can be a source of fun to try and kill the debuffed person before it wears off. 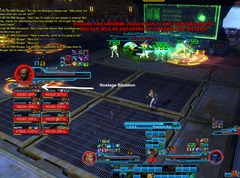 Have tanks grab Coratanni and Pearl and turn them away from raid to prevent their Suppressive Fire and Acid Spit from cleaving the raid. Raid need to spread out to avoid getting Down Under debuff from Ricochet Shot. The goal here is to get Pearl to a low % (i.e. ~10) before damaging Coratanni too much. Avoid the Deck Gun telegraphs and use the console to remove Flame Grenade DoT if the damage is too much. Coratanni will escape at ~19% and Pearl will enrage a few seconds after that. Tanks should prepare their cooldowns for this enrage.

After finishing off Pearl, have everyone interact with the escape pod to get ported to the next area.

Finish off the elite adds before engaging Ruugar. Avoid the land mines from Ruugar and spread out to lessen the raid damage from Corrosive Grenade and Death Mouse. Depending on your tank/healers, you may or may not need a tank swap when stacks of Corrosive Dart get too high. Watch the screen and if you see the red text of someone getting held hostage, stop attacking Ruugar for 5 seconds.

At 7%, Ruugar will activate self-destruct and the fight is finished.