The Utilities most useful for PVE will be bolded. Some have greater or lesser importance based on the encounter

What you need before hand

There aren’t many procs to this spec, however there are quite a few things you want to be aware of. They are as follows:

Abilities (Not a priority system)

As it stands there are a few known effective rotations for Dirty Fighting. I’ll cover them here and update accordingly

The rotation most familiar to most Dirty Fighting Slingers  from Pre-3.0. This one is a bit rougher on resources unless you have the old (186) set bonus

The filler boxes can either be Dirty Blast, Quickdraw or an alternative free filler (Hightail It, Flurry of Bolts, Free Quickshot), and you can alternate them as needed. The benefit of running the old (186) 4-pc is that you don’t need to use free filler as often, instead being able to use more quickshot/dirty blast. If you don’t have this set bonus you’ll hurt your energy unless you swap in free abilities in the filler spaces. Sub-30%, Dirty Blast is a better choice than Quickdraw with Hemorrhaging Blast on the target  Remember to buff your Wounding Shots with Smuggler’s Luck if it’s off cooldown as much as possible, and with no big energy sink you can use Illegal Mods offensively, prior to the first Wounding Shots.

This rotation is more complicated than the prior one, but it does seem to have higher damage potential

The filler spaces depends on energy management. If your energy is fine and can handle it, use Dirty Blast in the filler spaces. If this isn’t the case, substitute in free filler (Quickshot, Hightaill It, etc).  Rotation A is the more mobile of the two given it requires less channeled abilities, however Rotation B could have slightly higher damage potential with easier resource management

Extra Shrapnel: As mentioned before this talent makes multi-dotting a cinch. For a group of adds, apply Vital shot to one of them first and follow it up with Shrap Bomb to spread both DoTs to all the targets within range (5m radius on Shrap Bombs splash)

Sweeping Gunfire: You definitely want to take the Efficient Ammo utility to buff this ability. With no cooldown and an 8m range, you simply don’t have a harder hitting AoE in your arsenal.

The above will be your biggest hitting of the AOE’s. If you apply your DoTs first, you can use Sweeping Gunfire following that while your DOTs continue to tick. XS Freighter Flyby should be used situationally, if you cannot pre-cast it, it’s not really worth using . Hightail It is a great way to get more damage into a group as well if used correctly. Thermal Grenade isn’t really worth using, you’ll be better served using Sweeping Gunfire in it’s place, however if you need immediate damage then using Thermal Grenade becomes a better option

As a quick tip, multi-dotting is a great way to manage energy. More chances of critting on your DoTs means more opportunity to get energy back, so when possibly, look to take advantage of this 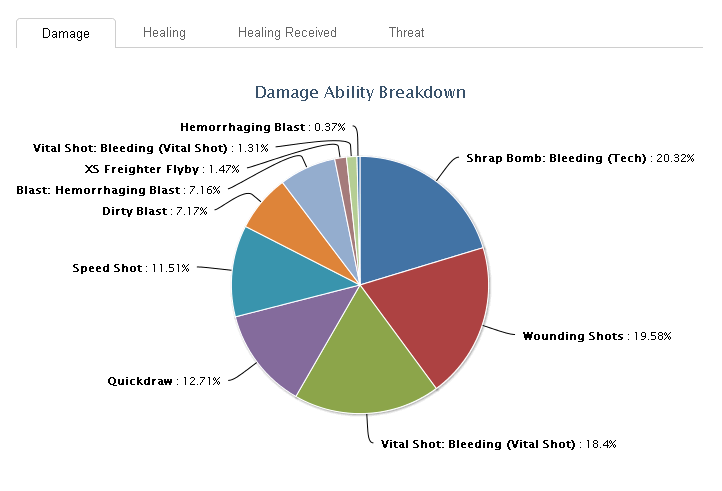 After this there are your multiple filler and Hemorrhaging Blast, which doesn’t deal much damage on its own but is used frequently. Dirty Blast, Flyby and if you used it, Incendiary Mine (Hightail It), make up the rest of the parse

Although your primary role as a DPS is to well, deal damage, mitigating as much damage as possible to yourself and your group simply makes everyone’s job easier and thus makes it easier to succeed. A good way of doing this is knowing how and when to use your defensive abilities. I’ll go over them here

My name is Cloake, GM of Intrepidation on Begeren Colony, a fairly new PvE Progression Guild (Formed around 2.6) of players looking to grow and learn together. I’ve been a Gunslinger fanatic since I first rolled one over a year ago and spend a lot of time learning as much as I can about the class.

There’s not much else I feel to add about myself, except maybe that I hate doing dailies. Random fact. I also think Chinsa’s a noob

That said, I’d like to give thanks to Kwerty for all the assistance as well as credit to both he and KeyboardNinja for developing the 3-Wounding Shots rotation.