Lightning has been returned to its former glory and is once again a very viable option for any PvE content. The new mobility we have, along with all of the old/new utilities we bring to fights, puts Lightning in the best spot that it’s ever been, in my opinion. Very high burst, good sustained damage, lots of useful things for a group and great looking animations, what’s not to like?

You have a lot of utility to bring to any fight, please use it!

This guide will be updated if they tone down Force Storm. I’m hoping they won’t, but I doubt they want it to be viable for single target dps (there’s also a lot of pvp complaints about it). Will also be updated if I find any errors or I figure out something that I currently don’t know (very probable)!

We do not have issues with our force pool (under normal circumstances), so don’t be afraid to bubble everybody in your group if there’s sufficient downtime and your force pool permits. This is assuming that there is no sorc healer who uses more powerful Static Barriers.

These utilities can make or break a fight, and it’s up to you to decide what to use and when to use them as the fight dictates. They are all situational. Good luck!

Accuracy (assuming you have 1% companion bonus. If you don’t, get it!) – Personally I think that anything above 109.5% Force accuracy is sufficient. I’m sure the theorycrafters will come tell me how wrong I am, but I personally do not like going over the accuracy cap, and so I do not. It’s up to you if you can live with a slight miss chance.

What I would personally recommend based on gear level:

Crit – I’ve done a lot of crit testing over the years (with game play, not math), and for me, the results are normally about the same on average (unless using insane amounts of crit, then it’s lower). I try to just stick around 25% now and call it good, but there’s probably some ‘optimal crit’ according to theorycrafters that I don’t know. I’m currently at 239 crit rating (24.68% crit chance) and usually hover between 200-300. This could change in bis 198 gear, but I’m nowhere close to that yet!

Power – Everything that isn’t crit.

Surge – At least 3 pieces of gears worth (306-360 depending on gear level). Can go higher if you feel inclined through augments (you’ll start hitting some diminishing returns though).

Alacrity – At least 1 piece of gears worth (102-120 depending on gear level). Can go higher if you feel inclined through augments.

Augments – Based on recent numbers from theorycrafters, they say Power augments are #1, with main stat just behind them. You will have more crit (~1.67% for me with full Willpower) with mainstat, more bonus damage with power, so choose whichever you prefer. I’m currently using Willpower.

Augments are also a good way to make up any stats that you’re missing from gear, or want to otherwise increase. I was a bit low on surge with my current gear, so I dropped some Surge augments in to compensate.

Set bonus – 6 piece Force-Master. It’s very possible that the old 4 piece + new 2 piece would be better, but I don’t have the gear currently to test properly.  It will probably get nerfed if people start using it.

Note – You want to use Polarity shift before your Attack Adrenal (or any cooldown without a timed debuff on your bar). The 20% Alacrity will reduce the cooldown of your adrenal from 3 minutes to 2 minutes and 30 seconds without any additional Alacrity (The math doesn’t seem to add up, but it is indeed 30 seconds and not 36 seconds). It does not work with Unlimited power because you’re locked out for 5 minutes either way.

Ideally you’d also have a merc using their 10% Alacrity buff before the group uses their cooldowns as well for even more time shaved off of cooldowns.

There’s another promising rotation using Force Storm a lot more, up to ~90 hits on a 1 mill dummy, but I’m not going to go over that here as it’s not nearly as viable for mechanic-filled operations and is in all likelihood getting toned down anyways

Assuming your CL proc isn’t about to run off, which it never should be.

I tried to get a parse with as close to average crits as possible to show the percentage of totals that you should expect (I’m at 24.68 crit chance atm). Obviously it will vary a bit with crit and all the rng procs throughout our rotation, but you get the idea! 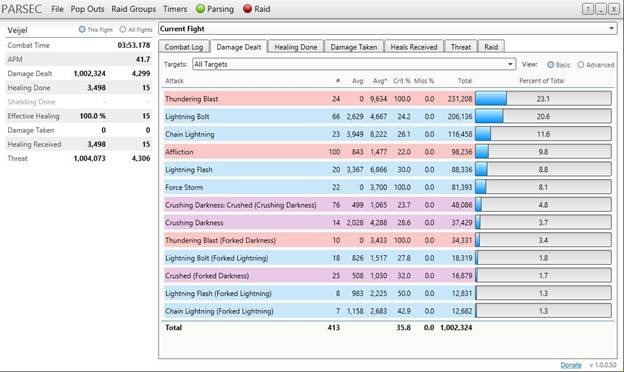 The ability delay for me is horrible on my ship atm (has been mostly bad since 3.0), but the percentages should be close enough. Apm for dummy parses is highly dependant on how many times you use Force Speed. During an actual PvE fight apm varies wildly depending on a multitude of things, so don’t concern yourself with it too much.

I’ve hit well over 4.5k a few times (ability delay permitting) with this rotation and some decent/nice RNG (gear is a mix of 180/186/192 with a 198 offhand armoring), and I’ve also hit 4k with some terrible rng. Don’t be too worried if you’re doing everything correctly and the numbers aren’t there. This spec is still fairly RNG dependant.

Disclaimer:  After 4 hours of attempts, this was the best video I could get.  The ability delay is still terrible for me on my ship so I may have mistimed one or two things due to that.

My name is KTap (Currently playing Veijel, formerly Stomach/Handcuff) and I’ve been playing a Lightning Sorc/Telekinetics Sage off and on since RotHC released. I’ve dabbled with other classes and specs, but this spec is by far my favorite in the game and I’m very glad that it’s once again an excellent choice for any group! I’m in the guild Zorz on the Harbinger server.

This guide is a culmination of not just mine, but other people’s ideas as well. I am not all knowing and had plenty of help from other people, whether it was their insights or they inspired me to do something out of the box (too lazy to find and list everyone, sorry).

If you’re looking for pvp advice, I’m probably not the right person to ask. I’m fairly competent at pvp, but there’s definitely more knowledgeable players out there and I’d suggest posting your pvp questions in the swtor pvp forums.

Please feel free to ask any questions, tell me how wrong I am (I wouldn’t be surprised), etc in the comments here or through private message on the swtor forums (I’m KTap there as well).

I hope you enjoy the guide and thanks for reading!