Deception pretty much plays like it used to. The energy management got slightly changed and we got a replacement ability for Shock but that is really all there is to it as far as mechanical 3.0 changes go.

You still have your choice for utilities which I highly advise you judge on a boss-to-boss basis. Each boss has unique abilities and that makes different utilities particulary useful.

Overall though, I would generally not recommend the exercise of the Deception Discipline at all given the current strength of Hatred. Hatred beats Deception at AoE, Single Target, and in some cases even at burst capabilities.

If you really are a die-hard Deception player that doesn’t want to know about Hatred, just know you are shooting your own kneecaps. kinda. 😛

Each boss you’ll probably want a different Utility set. However let me first state the ones you should have for EVERY boss fight.

Now you have 4 choices left per boss.

Any Utilities I didn’t mention are not even worth considering for end game plays.

With the sole Exception of Mental Defense/Shapeless Spirit, if your healers are extremely slow with cleansing on Torque HM.

The reason for using the quotes is because there isn’t really much of a rotation for Assassins. It’s all about interpreting your momentum the right way. I will explain exactly what I mean by that now.

For Assassins, I like to explain the damage sequence as a set of rules that you should follow but you CAN “cheat” them if you find yourself in a unique situation.

The first rule, ALWAYS use Discharge the moment you get 3 Static charges. Not doing so might result in procs that will only retrigger the duration of the 3 stack proc. But they are effectively “lost” This can still be a good thing though, if you need to save your burst for a couple of seconds for example. You might want to hold off on using your Discharge. But only then.

The second rule, ONLY use your Ball Lightning with 2 Induction procs. Not doing so will result in force starvation before Blackout is back. Forcing you to use more Saber Strikes than you should. Once again this rule can be cheated if you find yourself in a massive overflow of force. For example at the opener.

The third rule, keep your Voltaic Slash buff up at all times. This rule should not be cheated and is pretty much a holy grail. Sometimes you will find yourself using extra Voltaic Slashes to ensure you do not overcap force. This is when you are in the middle of a Ball Lightning cooldown and havn’t got anything more force consuming to use. If however you find yourself overcapping and Discharge becomes available, Discharge still has priority.

The fourth rule, use your Maul only with a Duplicity proc. It is also at the bottom of your priority list because while the proc is up, another cannot trigger due to internal cooldown. It replaces one of your Voltaic Slashes in between Ball Lightning’s cooldown when it triggers. Allowing you to save 13 force. Which you will need to last the entire 45 seconds of Blackout cooldown.

Now before we continue I wish to add a little explanation as to how Ball Lightning really works in conjunction to the rest of your abilities. Basically, when you use Ball Lightning, you have EXACTLY 3 GCDs to get 2 Induction and once you have that you should stop using attacks that trigger Induction.

For example: You are at 60 force, you have a Duplicity proc and need to refresh Voltaic. You use the Duplicity proc and you refresh Voltaic Slash. After that you Saber Strike to ensure you don’t lose more force than you have to.The order isn’t important unless either buff is prone to expire before you can get the second gcd off. In that case whatever is about to fall off has priority.

This rule is overridden once you get to the burn phase. At that point you just hammer for as long as you have force. Only using a Saber Strike if you think you will run out of force.

The AoE “Rotation” has basically become your Single Target rotation where you Substitute Voltaic Slash for Lacerate. Lacerate now costs the same amount of force, and offers the same bonuses that Voltaic Slash does including the Voltage buff. It is a full-blown replacement for 3+ targets in close range.

This doesn’t make the AoE of Deception particulary amazing..but at least it’s not as terrible to execute as it used to be. 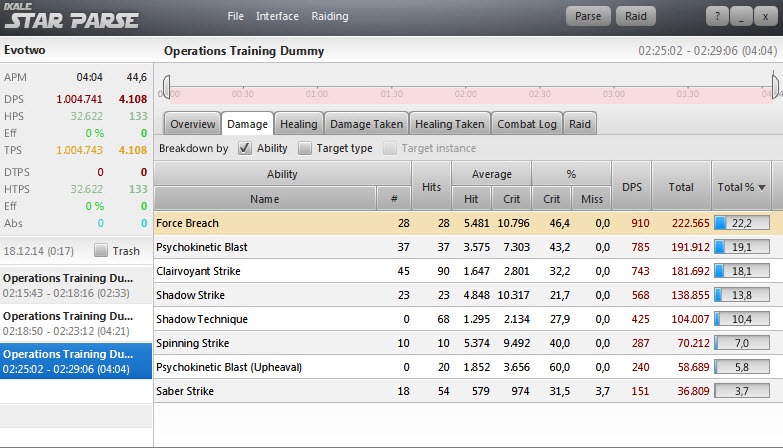 Force Breach (Discharge) has taken the top spot from Voltaic Slash as your main damage source now. Which isn’t surprising given the drop of crit chance as we don’t have the old 4-set anymore. And the new 4-set makes us able to almost perfectly sync Force Cloaking and Blackout.

Psychokinetic Blast (Ball Lightning) is your full-blown Shock replacement. It hits harder but basically does the same thing. The high frequency of its use and high Surge rating on it cause this ability to come in a close second.

Clairvoyant Strike (Voltaic Slash) as I said with Force Breach, this ability lost a lot of its damage from the sudden drop in crit chance. However it is still by far your most activated ability and therefore comes in at a balanced third place.

Shadow Strike (Maul) also hits particularly hard thanks to Duplicity, however it’s less frequently used due to Duplicity’s longer cooldown, though it should still be in fourth place for your overall damage.

Shadow Technique (Surging Charge) is an excellent Charge, with a low proc chance for high damage, but thanks to Voltage Balls, it is forced to proc more often than it should naturally, despite its long internal cooldown. Depending of course on RNG, the exact percentage will vary, but will often take the fifth spot for your damage dealt.

Spinning Strike (Assassinate) is a powerful and cheap ability that gains great benefit from talents. It should be used as often as possible, and its damage essentially depends on how long the fight actually lasts for with targets under 30% HP. On an average single target boss fight, it should do lower damage than your other hard hitting abilities, but higher than Saber Strike and any fillers.

Saber Strike is the final components of your parse. Saber Strike is used the most during the two long delays between Blackout and Force Cloak cooldowns, since you won’t regenerate Force as quickly, so accounting for between 2-5% of your damage dealt is often a good number.

You can observe that at least half of your damage dealt is done by melee attacks from your Voltaic Slash, Assassinate, Maul and Saber Strike close to 50%, while the other half comes from Force abilities such as Ball and Discharge. A high proportion of your damage dealt, usually around 70%, is done by Energy / Kinetic damage which is highly mitigated by armor, making your armor penetration talent and Debuff very useful. The other 30% is Internal damage from Discharge and your Saber Charge.