SWTOR 3.1.2 Serenity Shadow DPS Guide by Aelanis of The Shadowlands, with contributions from Evolixe.

Serenity plays very similarly to the old Balance Shadow. Energy Management became somewhat easier outside of execute range, and very tight in the execute range, and the AoE rotation was almost entirely revamped. With the new Serenity Strike, and change of self-heals from triggering on periodic effect critical hits to being simply damage based, we saw a huge increase in self-healing and survivability that has made it the go-to spec for PvP.

Utility selection should go on a boss-by-boss basis, as we have a wide variety of abilities that can make certain situations go from challenging to sleep inducing.

With the loss of damage on Leeching Strike, in combination with the resultant loss of healing and the reduction of life steal from Discharge and Creeping Terror, Hatred has been hit really hard in PvE, to the point where Deception can easily tie, if not beat, Hatred in both damage and survivability. Almost all bosses are better fought in Deception at this point. This is due to Deception’s AoE damage reduction skill and the spike damage prevalent in this tier of Hard Mode Operations forcing healers to keep DPS at near full health, which means they won’t give you the time to let your now fairly meager self heals do their work. Paired with nearly equal damage to Deception, there remains almost no reason to bring a Hatred Assassin to an Operations setting.

As in RotHC, gearing a DPS character will require grabbing numerous pieces. Below, I have listed below what you want to trade your token for, and why it may be a good choice. Power is rare in our set, and we require much more of it than we do crit, so pick up more of these pieces if you can. We also need a whopping 758 Accuracy rating, so Accuracy/Power pieces are incredibly valuable. Unfortunately, you’ll need to keep your eyes open for other pieces with Accuracy/Power enhancements, since we don’t get even a single one in our set bonus. You may end up getting a lot of Force Master’s boots. One more thing to remember: no offhands/main hands in this entire tier of gear have a color crystal in them, so don’t forget to add your favorite one in!

There are a few utilities that you’re going to want regardless of the fight, and a few that have situational use, but are not always mandatory. Each boss you’ll probably want a different Utility set. However, there are a few you should have for each boss fight, due to them being so strong in general.

That leaves 4 more utilities to choose based on the boss.

The opening rotation is a chance to deal quite a bit of damage in Serenity, as well as set you up for the entire rest of the fight. Start by pre-casting Vanquish into: Force Breach > Adrenal + Relic + Force in Balance > Double Strike > Spinning Strike > Sever Force > Serenity Strike > Vanquish.

This sets you up for a very high damage Spinning Strike, as the Vanquish ticks combined with the Force Breach ticks give you a roughly 92% chance of having Spinning Strike ready to go, and also a slightly higher chance that you have both relics (if not using a click relic) going for the auto-crit for maximum damage. Unfortunately, Serenity Strike does not fit into the opener until later as losing a relic boost on the auto-crit Spinning Strike is a damage loss over the 2% damage boost.

An opener that does not hurt your Force bar as badly, and lets you open up from further away, would be: Sever Force > Adrenal + Relic + Force in Balance > Force Breach > Double Strike > Vanquish > Serenity Strike > Spinning Strike. It does not pack the same punch as the first opener, nor does it flow into the normal rotation cleanly, but has a much easier Force recovery phase that follows.

There are two ways to look at the rotation for Serenity: Move Priority and a strict Rotation.

This is the method I prefer to use when I play Serenity. It’s a little tricky, but once you get used to it, it is quite easy to follow, and made life before debuff sorting much less of a hassle. Basically, your two 18 second dots will stay fixed at 2 points in your rotation, where nothing should interfere with them. This means you should have perfect uptime on Force Breach and Sever Force, and they should consume more of your stacks of Force Suppression, which is good, since they deal slightly more damage than Vanquish per tick. Your rotation framework should look very similar to this:

Each F is a spot in the rotation where you will have Force in Balance rotate through, or where other things will happen that I’ll explain later. Force in Balance has a 15 second cooldown, Force Strike has a 9 second internal cooldown (a half multiple of 18 seconds), and Force Breach and Sever Force both have 18 second durations. That means that if you look at the Serenity “rotation” in an 18 second block, Force in Balance will fall back 2 spaces each rotation. Example (MA = melee attack, V = Vanquish):

As you can see, you’ll occasionally delay Vanquish in order to not delay Force in Balance. Previously, this would never happen, due to the 7.5 second lockout on Force Strike, but it is okay to do it now, because you can safely delay Vanquish up to 2 GCDs after its Force Strike trigger and still not miss out on Vanquish uptime. With that part of the rotation explained we go back to the framework:

Those Fs in there aren’t just for Force in Balance: you’ll typically use Vanquish in there. Vanquish will, if you go from the suggested opener, land on the second and fifth F spaces, and once in a while be delayed from the second to the third F space when Force in Balance passes through. Because of its 12 second cooldown, Serenity Strike, used in the M* spaces, will never interfere with Force in Balance, Sever Force, or Force Breach, allowing for perfect usage on cooldown during the pre-execute phase. Spinning Strike and Double Strike will always fall into spaces where nothing else interferes.

Most of this is quoted directly from MK’s old guide, and updated for 3.0. “The only difference in this method is it always prioritizes Vanquish reapplication instead of the rigid Force Breach and Sever Force reapplication. This means it can be a little harder to follow in an actual fight but this priority does flow perfectly into the execute phase and is exactly what you end up doing in the DoT Focus method during the execute phase anyways.

Openers will be the same as the other method, the differences show up when you get to the second DoT applications and later.

Some extra things to note about Serenity priorities and rotations

If you mess up: It’s going to cost you a chunk of damage, but freaking out and messing up more will cost you even more. If you accidentally delay an ability (like Force in Balance) or mess up dot reapplication, do what you need to in order to fix it, even if it means clipping dots on your next application or delaying Force in Balance by a global to get it back on track. Don’t let things snowball out of control, or your damage will drop sharply.

With the advent of 3.0, you can now spread your long duration dots from one target to up to 7 more. You must simply have one target in your Force in Balance’s range that has one of Sever Force or Force Breach (or both) applied to it, and up to 7 additional targets will become affected by those dots. With more than 8 targets, the selection becomes random and which ones you hit is out of your control, save for targets that have your Sever Force or Force Breach already on them. Please note: Vanquish will not spread to other targets (which would be hilariously more overpowered), do not waste time applying it before Force in Balance.

Case 1: You have some number of targets (Evo used 4). You hit one with Force Breach and Sever Force. After you use Force in Balance to hit them, all 4 have both dots, because none of them started with it.

Case 2: You have some number of targets (Evo used 4). You hit one of them with Force Breach and another with Sever Force. After you use Force in Balance to hit them, all 4 will have both dots, since Force Breach will spread to all targets without it and Sever Force will spread to all targets without it. This method is a little trickier but a little safer. Instead of risking killing your only “host” (has all the dots) if you crit when they don’t have a lot of health, you have less chance to crit and kill both of two hosts. The spreading works just as well, and it’s slightly less likely to kill low health enemies instead of spreading your dots, it just requires more constrained placement of the Force in Balance ground target. It’s also less predictable in PvP. It can also ensure that you hit 2 different targets with Force in Balance that you want to make sure die first (or get more damage dealt to them) by forcing the game engine to select them as targets for Force in Balance.

After you spread your dots, if there are 3 or more targets, you want to spam Whirling Blow. If they all survive for 18 seconds, you can simply repeat this rotation (dot up, Force in Balance, Whirling Blow). The only thing you must remember is to let your dots fall off each enemy other than the “host” or else they won’t spread to all targets. In the case that they don’t all survive for 18 seconds, you still have a target with both dots on them and can begin you single target rotation. Some general rules of thumb for AoE: after your first rotation, if all of your targets (2 or more total) have less than ~25,000 health in a flashpoint, ~70,000 health in an 8 man raid, or ~150,000 health in a 16 man raid when Force in Balance comes off cooldown, don’t bother reapplying dots or delaying Force in Balance, they won’t survive the group’s AoE damage to make up for the lost damage. This number will go up as your group gets more geared and/or skilled. 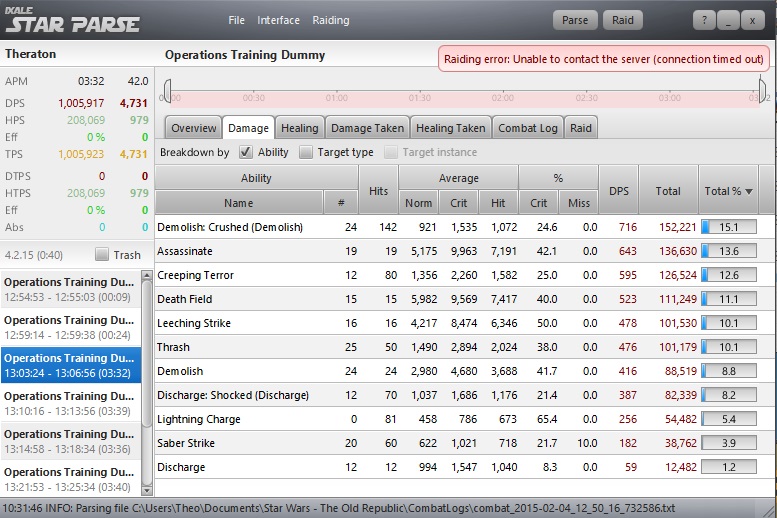 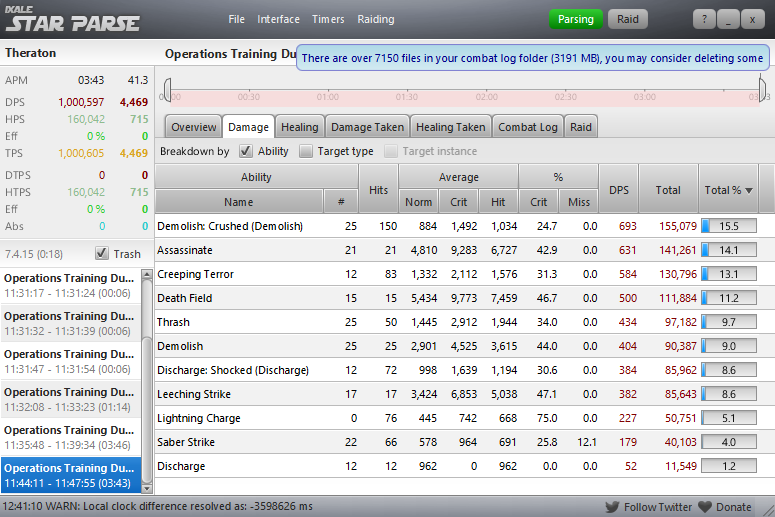 Vanquish (Demolish, dot) should be taking first or second alongside Spinning Strike. It ticks very quickly, resulting in roughly twice as many times as your other two dots independently. Depending on critical hit luck, they will alternate between parses. Like Spinning Strike, it’s worth roughly 14-15% of your damage.

Spinning Strike (Assasinate) should be one of the top two damage dealers for Serenity. You use it fairly often, it hits incredibly hard, and you use it an absurd amount in the execute phase. It’s worth roughly 14-15% of your damage.

Sever Force (Creeping Terror) takes third place. It receives a lot of damage boosts from the tree, and has very good uptime. It’s worth about 13% of your damage.

Force in Balance (Death Field) hits particularly hard, and has a very high critical chance thanks to Force Potency. Used on cooldown, it should end up in fourth place. It contributes roughly 11% of your damage.

Aelanis is an avid forum-goer on the Shadow/Assassin forums, hailing from The Shadowlands. Despite having only raided Nightmare content since 2.8 released, Aelanis has put up very competitive numbers on numerous boss fights and previously held a spot on the World DPS leaderboards. If you play on the Shadowlands, you can reach him on Theraton, in Exit Area on the Imperial side, or Ellendra, in Death Mark on the Republic side.