Carnage has received many changes in 3.0, with a major change being to Gore. Now, Gore has a 3 second window of 100% armor penetration on a target with a 12 second Cooldown. This gives a 25% uptime on Gore unlike previously in 2.x where we had a 33% uptime with a 10.5 second CD and 4.5 second Gore Window.

The 3 points in Skillful should always be taken regardless for PvE content as the other utilities are more PvP focused. The Masterful and Heroic utilities should be picked depending on what a certain boss encounter would benefit you as well as your raid team.

Accuracy – With the removal of all accuracy talents from all DPS specs, Carnage now requires the same amount of Accuracy Rating as every other DPS class. You need approximately 750 rating or more to get 100% Melee and 110% Force Accuracy.

Surge and Alacrity – Since Carnage now grants 3% alacrity from Ataru Form, with the current tiers of gear alacrity is not very useful for Carnage. Down the road with newer tiers of gear however, 1-2 pieces may be beneficial. For now, Surge should be prioritized for Carnage, and 300+ rating is recommended.

Relics – The best choice for relics are the Serendipitous Assault and Focused Retribution, although Boundless Ages may be substituted for fights that require on demand burst.

Mods and Enhancements: Unlettered Deft and Potent Mods are the best choice for gearing. In addition, using low Endurance enhancements such as Initiative and Acute for accuracy and Adept and Battle for Surge.

One thing to note about Carnage, is that there are only 2 main procs that you need to deal with, one is Slaughter, and the other is Execute.

Basically, in between Gore Windows, you will basically spam Massacre and keep up enough rage to use for each upcoming Gore Window. Assault is used very minimally as a filler.

The rotation has become much easier than before, with much more use on Massacre since Carnage no longer can use Rupture, and consists of basically 3 different Gore Window Situations:

Gore is now on a 12 second CD, but when used under Berserk, the next Gore will be on a an 8.4 second CD so you still get 2 Gore Windows in a 20 second time frame, but only a total of 6 seconds vs 9 seconds from pre 3.0. One key difference is that you will only get the reduced Gore cooldown if you activate it while under Berserk. This applies to all abilities.

A Gore Window with the use of Berserk [Ravage + Devastating Blast] will consume 3 of the 6 charges from Berserk. This will set Gore, Ravage and Devastating Blast on a shorter CD than normal (33% shorter). With the following remaining Charges after the Gore Window has ended, follow up with:

This will give Battering Assault and Dual Saber Throw a shorter CD to use again before the next Gore Window, while keeping the buff up from Massacre.

The rest of the filler rotations in between Gore Windows consist of Massacre and Assault to keep up enough rage for each Gore Window.

You want to use Massacre each time right before starting a Gore Window, so you have the Massacre buff up for the duration. Regardless, the Massacre buff should be up at all times for maximum DPS in the filler rotation between Gores.

As far as AOE rotations go, Carnage is not very good at AOE damage and only has 3 main AOE abilities:

With the damage bonus from Sweeping Slash in the utility tree, this does quite a bit of damage and would be your best bet, best used with 4+ targets. Smash damage has been reduced significantly outside of the Fury Discipline and I would not recommend using it unless there are 4-5+ targets to really get the damage/rage cost out of it. 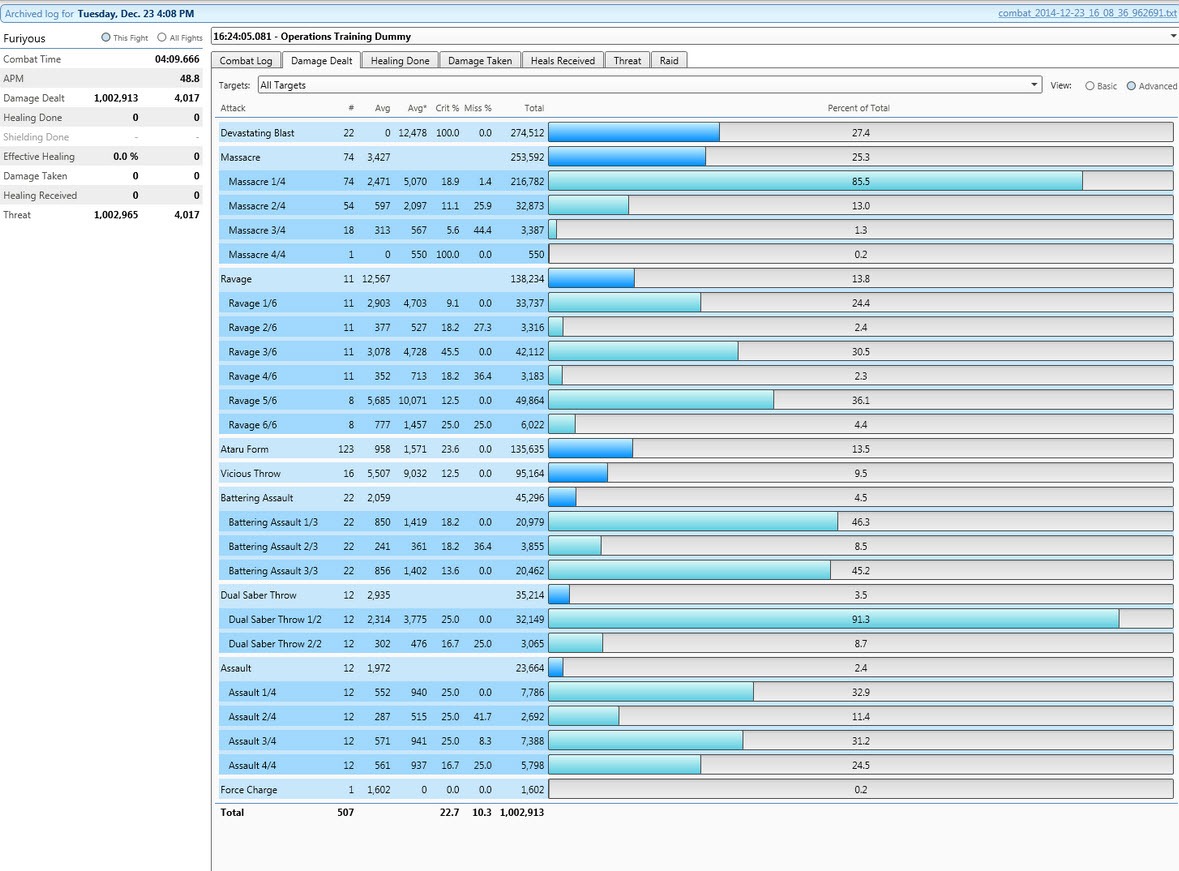 The APM should be around 50-51 (where the parse shows as just under 49) due to the lag on the Harbinger Server since 3.0 launch.

I am Aria, a top tier progression raider on the Harbinger, and proud member of <YES> and <Concept>. My marauder, Furiyous, has been my main DPS progression toon since game launch (with my mirror Jedi Sentinel). I have cleared Dread Fortress and Dread Palace Nightmare and Timed Runs with both of my guilds in two different roles. While my main role has been a tank for past progression, my Marauder has always been my favorite class. Unlike many others, I have not given up on my Marauder post 3.0 and don’t have any intention to do so.

I would like to thank Noodles and Beastfury, two of my fellow raiders and good friends that helped me become the player I am today. I also like to thank my little brother Clickx from Louisiana, who helped to bail me out of jail.