GW2 Vinewrath Silverwastes achievements guide for the Point of No Return release.

The Vinewrath event occurs in the western end of Silverwastes in a newly added area known as Vinewrath Tangle. This event only triggers after Pact Assault Preparations and The Breach have completed. It will trigger regardless of how many Mordrem champions were killed during the Breach. 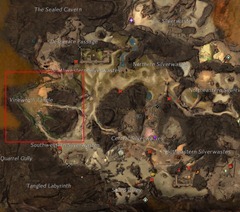 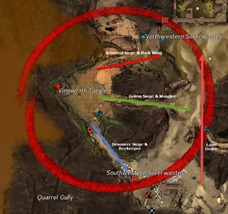 Much like the Marionette event from a while back, this event is divided into 3 lanes. Players can participate in only one lane at a time due to a debuff applied to them that lasts for ~10 minutes that prevents you from facing the Vinewrath again. However, players can join in the bottom lane and then join again at the top lane as the debuff wears off just in time.

Each lane take turns in facing the Vinewrath (bottom lane to top). You don’t actually get to fight the Vinewrath but rather a specific Champion. In addition, there is an unique siege carrier for each lane. If a champion is not killed by a lane, it gets pushed to the next lane. For example, if the bottom lane fails to kill the Beekeeper, the middle lane would get the Beekeeper champion and the top lane would get the Dark Wing champion assuming the middle lane can successfully kill it.

The champion list and the lane map above assumes each lane can successfully kill champion.

If all 3 champions are defeated, the event finishes and all the associated achievements are rewarded. The event fails if 15 Siege Carriers are lost.

Make sure to go in and loot the event chest after all 3 champions are defeated.

You can use your Mordrem Extraction Device on the Vinewrath champions so make sure to use it before you kill the champions.

Bottom lane should have the follow achievements associated with it. 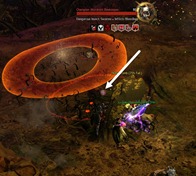 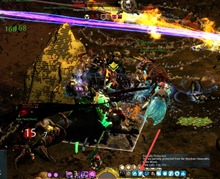 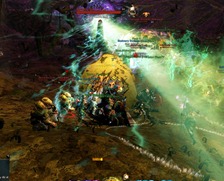 This section assumes that the bottom lane successfully killed their champion. If they failed, their champions will be moved up to the middle lane and the champion achievements will be shifted by one lane. 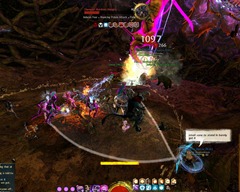 This section assumes that both the bottom and middle lane successfully killed their champion. If any of the two lanes failed theirs, you will only get the protector achievement. 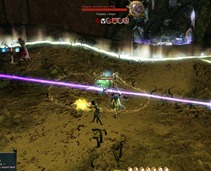 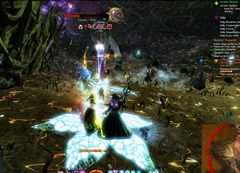 This achievement is only rewarded once all 3 champions (Beekeeper, Mangler, Dark Wing) are killed. The reward is 10 AP pts and a Carapace Coat Box. To get additional coats for the Luminescent coat collection you can loot them from the chests once all 3 champions are defeated (not a common drop)

You can have lanes fail to kill the champion but all 3 champions must be killed before all 15 Siege carriers are lost or the event fails and you don’t get the achievement.

Uhm, fyi the Honeycomb @ Beekeeper only pops up, if you redirect some bees into it(Charge it up). Just pass through the red Rings and kite the bees into a honeycomb, until it gets the white Square. Also, the troll adds should be knocked back or else they knock you out of the square(very annoying)

Noyne is right! You have to “build” the honeycomb first. If the honeycomb isnt built to 100% when the laser beams attack, you won’t be protected and won’t get the achievement. As Noyne said, you have to lure the bees into the honeycomb to build it!

I complete this 5 times. Only 1 coat chest. Looks like it will take time to get lumi collection.

I only completed the fight once so far and already have two coat chests. So RNG-luck, as usual 😀

Same here, fought once got two chest boxes. Good luck to all who are trying to get them! They’re looking so amazing ^^

I did the event four times now and got four coat chests out of it. 2 on first, 0 on second and 1 on 3rd and 4th each.

Hom much luck poinst do you have, are you using Magic Find Booster?
I got two on the first try, and now been doing it more than 5th time no luck with the chest.

Don’t forget to loot the grand chest inside the vinewraith place. A coat chest always drops if the event is successful … I think. I’m 4 for 4 on coat chest drops so far.

I expected more after such a long break. I expected we would be able to fight that purple flower thingie not just it’s 3 minions T^T

Additionally what champion you fight is not dependent on the lane. The first champion is always the Beekeeper, the second is always the Mangler and the third is always the Dark Wing. If one lane fails to kill the boss in time, then the next lane in order will have to fight him again, untill it’s defeated, and the lane after that will get the next boss. The Boss-lane association you listed is correct only if no one fails to kill it.

Yep that is why I mentioned above “The champion list and the lane map above assumes each lane can successfully kill champion.” and also wrote half a paragraph on how the champion switching works. I didn’t know about the tuning thingie though so I will add that bit in thanks

Just to clarify some more:
The tuning -does not- matter for the last fight, actually. I tested it with and without. The only thing that actually matter is having the extractor on (not the specific organ one, general use), and that you’re at troll or terragriff. This seems like a bug, as it doesn’t work on thrasher.

I had a Mordrem Tendeon Extration Device active when I killed the Mangler (middle boss, Thrasher type) and did not get rewarded with a thrasher tendon.

This is after the HoT expansion.

Not sure if this is still the Thrasher bug or that the specific tuning device doesn’t work on the 3 Mordrem Champions.