This is a fairly easy first boss fight in the Ravagers and probably the easiest of all ten bosses in the new instances in Shadow of Revan. Sparky on Hardmode is a pure DPS fight since killing things faster will cause tanks to take less stacks of debuffs and therefore receive less damage. Sparky has an aura around herself that gives any adds around her 50% damage reduction and direct them to attack her current target. Single adds will spawn in the first minute, with 15-20s in between them. Every minute you will get another set of two or three adds to DPS. Finally, adds will start spawning every few seconds until you kill Sparky. This is a soft enrage mechanic that force you to burn down the boss before the adds overwhelm you. Make sure to spread out for Rampage and DPS the boss hard when she uses Brutalize to pin someone down.

Sparky now has a Command Presence Aura around her that give any adds inside a 50% damage reduction. The same aura will also allow her to command the adds to attack her target. Her Shoulder Throw/Body Slam now applies a stacking debuff, so you can ideally tank swap on every other Throw/Slam (although we do not find this necessary). The Rending Swipe debuff the adds applies no longer has a duration and won’t fall off until end of the fight. This cause this debuff to stack continuously which means that adds must be dealt with quickly by the DPS. 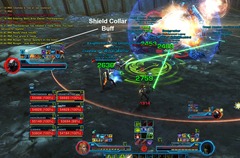 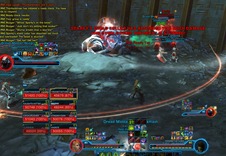 Initially when you engage Sparky, she will have a Shield Collar that reduces her incoming damage by 50%. This collar will break if you bring Sparky down to 89%. The only time this shield collar will come up again is during the Brutalize mechanic described below.

Command Presence/Safety of the Pack

General: Sparky have two buffs on her in Hardmode that are worthy of note. Safety of the Pack and Command Presence.

They both concern the circle that appears around Sparky. If any of the adds are within that circle, they will take 50% reduced damage and attack Sparky’s target. 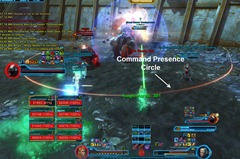 In the first minute, you will get 3 waves of single adds. The come about 15-20s apart and will attack their nearest target. The offtank should pick them up and try to drag them outside the circle so they don’t get the damage reduction. The entrance of these 3 adds are usually around 5s, 25s and 40s into the fight.

The 4th group of adds is usually a pair that comes in approximately around 1:30 give or take a few seconds. Subsequent groups consist of two to three adds once every minute until the burn phase starts. During the burn phase, a new add will spawn approximately every 5s until the end of the fight. You should kill the adds from the pre-burn phase as soon as possible but ignore the burn phase groups and just focus on killing the boss, since you will have difficulty killing Sparky while killing all of the adds.

The adds will apply a debuff called Rending Swipe on whoever is tanking them. This debuff is a stacking debuff with no duration. You will keep the stacks until the fight is over. Each stack increase the damage you receive by 4%. The faster your DPS kill those adds, the less stacks you will receive from them. This is a mechanic that can make the difference between a wipe or a successful kill.

In addition to the debuff from the adds, tanks will also receive a stacking debuff from Sparky called Delicious that lasts for 30s. Each stack of this debuff increase the damage you take by 20%. This debuff is applied whenever Sparky use her Shoulder Throw or Body Slam on the main tank. She uses these attacks about every 20 seconds. 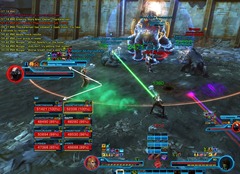 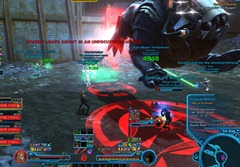 Sparky has a cleave called Great Swipe so tanks should be facing her away from the raid. She also have a casted AoE called either Roar, Forceful Roar or Desperate Roar depending on her HP. The biggest AoE damage is from her Rampage, but it is not very significant overall. Starting at 1min into the fight, Sparky will do her Rampage attack. This ability has as 3.0 channel so you should know in advance when is coming. Sparky will Rampage Pounce to 3 random raid members and land with an AoE circle on each one. Anyone inside the circle will take about 7-8k damage. 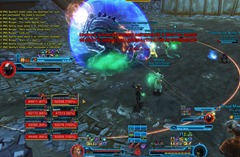 General: Brutalize is a 20s channel in which a raid member (often the main tank) is pinned down and takes continuous damage. If Sparky is allowed to finish her channel, the pinned player will die instantly for a massive amount of damage. This is a DPS race to rescue the pinned player before she finishes channeling, but it’s not too difficult with a decently geared group.

The progression of the fight is fairly simple with the raid shifting between dealing with Sparky and her adds.

At 1 minute into the fight, prepare for Sparky’s Rampage attack and then expect it every 50s after that. To minimize the amount of players caught in an AoE circle, everyone should spread out when Rampage is active. Be on the lookout for Brutalize and make sure all the DPS are focused on breaking down Sparky’s shield. You should expect a 4th wave of adds around 1:30 and a 5th group of adds around 2:30.

Once Sparky is below 30%, you can safely ignore adds and burn the boss. At around 25% the boss goes into a soft enrage, which causes more adds will spawn every 5s after this group so the offtank just need to run around and kite them until the fight ends, because the damage can be too much to face tank them all at the same time. If your healers are good (or bored), you may not need to kite.

Tanks: The main tank should rush in and grab Sparky to turn her away from raid. Offtank be on the lookout for the add spawning at 5s into the fight and drag it away from Sparky. You can tank swap on every other Body Slam/Shoulder Throw to ensure the tanks do not get more than 2 stacks of Delicious debuff. However, in Zorz, we do not follow this strategy since you can simply take an extra stack of Delicious, and then let it fall off during Rampage and/or Brutalize. So the tanks never need to swap with each other this way. Note this may end up being impossible on Nightmare but works fine for now in Hardmode.

In more detail: we do not tank swap, but if healing is a concern, you can tank swap at 2 stacks of this debuff. After the second Body Slam/Shoulder Throw, the offtank taunts immediately (taunt during the cast). Sparky tends to do a Brutal Pounce right after her slam/throw. With high stacks of Rending Swipe and 2 stacks of Delicious, the tank could be receiving more than double the damage later on in the fight and this combo might just one shot them. However, this is one reason why we keep one tank on the main boss. The main tank can easily take more stacks of Delicious (and then let them expire while Sparky jumps around in Rampage) since the main tank should be taking very few stacks from the adds’ Rending Swipe if the off tank does his job well.

Main tank: Note that Body Slam is a frontal cleave (180 degrees), so put your back opposite the raid and tank him there until he does it. Next, Shoulder Throw will toss the tank over his shoulder. You should rotate in order to get tossed into a wall. Rampage causes the boss jump from raid member to raid member. As this attack ends, re-taunt with your single taunt.

Off tank: Since adds in the Command Presence circle will aggro onto the main tank, sometimes the main tank will inevitably end up with the boss and 1-2 adds. This can cause a lot of damage taken, so reserve your AOE taunt for this case, using normal threat and single taunts to hold adds for most of the fight while they’re being killed off by your DPS. Then the main tank can single taunt the boss back.

DPS: If your only job is to DPS the boss, just stand where you like. Sparky’s circle does not affect your DPS. AOE healing is not too important on this fight so we recommend to stand slightly apart from other raid members to avoid taking extra damage. If you are assigned to help with adds, swap immediately and try to focus one down at a time, using AOE conservatively. Remember that the tank dealing with the adds will take significantly less stacks if you burst them down one at a time rather than kill them arbitrarily. All DPS should attack the Boss during his Brutalize cast, regardless of adds.

Heals: Healers do not have much to do in this fight unless the adds do not die quickly, or your raid group is undergeared. If this is the case, you should have plenty of time to DPS and help with adds. If not, just remember almost all of your healing should be on the two tanks, especially any tank dealing with adds for extended periods of times. The raid takes very little damage in general (unless tanks do not pick up adds from other raid members, such as yourself due to your passive heal aggro).

No additional strategy information is available at this time.

Healer PoV:
Not available at this time.

what about that 14 mil dmg insta kill of our main tank almost every time we do Sparky on HM? guess thats a bug… or?

I think this is something with the aggro of the tank and the range to the boss. Saw it just once or twice in about 20 pulls.

Maybe Sparky starts casting something but isn’t in range of the aggro-leader and therefore bugget out an instant cast it.

What i saw is if a tank taunt Sparky after rampage he dies instantly. Maybe this is what you did

Its the delicious debuff, when the tank has 2 stacks of this the tank will be instant killed by the brutalize.

We get that every now and then, never figured out why.

I’d probably put a mention for DPS VGs/PTs, Guards/Juggs + Shadows/Sins that they can also taunt the adds to keep them off the tanks, because outside of when the boss is jumping around the DPS won’t be taking damage normally anyway – and its far better to have 40 stacks on a DPS than on a tank.

What we do is have the off tank take them out of the circle and dump them on a healer or ranged so our melee doesn’t have to take time away from the boss. We do a swap at 2 stacks of delicious and this still keep tank stacks minimal. Then our ranged/heals burn the adds.

Also, what about augments? Does full augments go without saying when the recommended rating is 186 (so Fully Augmented 186)?

Reason I ask is because I often see a lot of people in unaugmented 186 gear from the commendations vendor and they end up with 200-400 less bonus damage/barely any accuracy/etc., stats overall bad enough that they seem barely geared for SM, let alone HM.

Their recommendation (186 Dread Master) means using unlettered mods, optimized enhancements, and a set bonus. Of course, if you’re really good you can do it with Yavin Gear so long as you’ve swapped the enhancements out, but I’d not recommend that at all.

And of course, full augments. You can get away with it in storymode, but in Hard Mode if you show up without augments, you’re making life terrible for everyone.