SWTOR Hardmode Blood Hunt Flashpoint Guide. This hardmode flashpoint is scheduled to be released with patch 3.1 on Feb 12, 2015.

Kyramla is no longer a roll over like in solo/tactical mode. Some of you may find him a good challenge while others may find him overtuned. He and his adds hits hard and will enrage if you don’t kill them fast enough. His hard enrage is probably around 3.20 with 1.03 mil HP. Adds have 72k HP and always come in pairs every 40s starting at 40s into the fight.

Use your offensive cooldowns ASAP to get a good burn on him before the Mandalorian adds spawn. Tanks and healers need to be aware of the new bleeding DoT that is applied to the tank whenever he gets thrown. This DoT can be cleansed by all healing classes and need to be removed as it ticks fairly hard. Tanks need to make sure to get back in range of the healer after the thrown so they are in range for the cleanse. 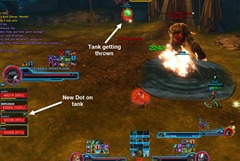 Kyramla’s hurl (random attack on party members) can hit anywhere from 14k-24k so be prepared for some spike damages.Tanks and melee DPS need to avoid the red circle/frontal (Ground Smash). 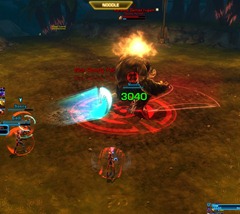 Once the Flying Rocks start to come down, make sure to avoid the blue circles as they hit extremely hard in hardmode (can take out half of your HP) and put a lot of unnecessary stress on your healer. The first group of two Mandalorian adds will spawn right after the first Flying Rocks attack (about 40s into the fight). 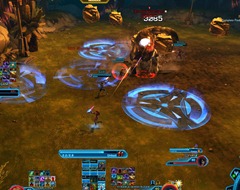 Once the Mandalorian adds spawn, all the DPS should switch to them to kill them fast (they have 72k HP each). Mandalorian adds are quite deadly as they will drop Fire Mines (blue domes) and try to target players with their Electro Net telegraph. If you had no choice and had to pick between running through a Fire Mine or getting targeted by Electro Net, pick the Fire Mine as the Electro Net ticks for 2.6k/s over 25s and slow you to make you extremely vulnerable to other mechanics.( Electro Net is not cleanseable as far as I know). 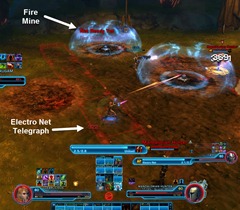 Rest of the fight is basically a repeat, with a pair of Mandalorian adds spawning every 40s. Sometimes the Flying Rocks attack from Kyramla can sync up with the Mandalorian’s Electro Net and Fire Mines, creating a huge mess on the ground.

There is no bonus boss in this flashpoint. Instead, the bonus content have you do all 6 challenges for a bonus crate. This is suppose to have high chances of dropping the decoration

The challenges are pretty easy and not much different from the solo/tactical mode.

Jos and Valk Veroya received a bit of damage buff on their abilities and seems to have lost their annoying knockback. There is abit of spike damage on this fight, especially if your group members love standing in front of Sweeping Gunfire. They each have 1.05 mil HP.

Jos will be the first guy you will fight. Anyone getting attacked by him will build up Execute stacks that lasts for 1 minute and reaches a max of 10 stacks. This debuff will make you more vulnerable to Jos’s execution moves such as Maul and his new nasty DoT. 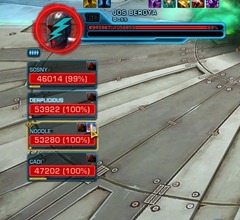 At around 9-10 stacks of this debuff, Jos will jump up and perform Aerial Strike. This is a PBAOE (Proximity Based AoE) that will leave a burning DoT on anyone standing near him when he jumps. Melee should run away from him when this happens as the DoT deals about 5k elemental damage per tick for 5 seconds and will take you to half of your HP. 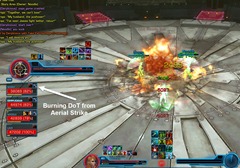 Once Jos jumps down, he will likely perform his Execution move, putting an Ignored debuff and a very hard ticking DoT on the tank. Healers/tanks use your cooldowns on this as it does 6k per tick on the tank for around 8 seconds. 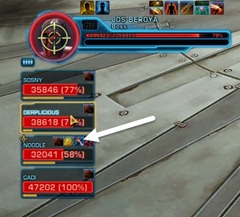 Valk will jump down next, performing her signature move Sweeping Gunfire. This ability is a frontal/cleave that deals about 5 damage every 0.5s and the channel lasts for 4.5s. Melee need to make sure they are not in front of her as otherwise they will take a significant amount of damage from it. Valk will spam Sweeping Gunfire pretty often. 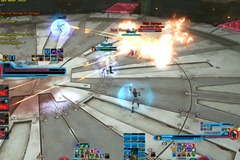 Valk’s other ability are red circles placed on all group members. These circles will follow you for a bit before stopping. Make sure you don’t run into other player’s circles and you can drop the circles safely without taking damage. 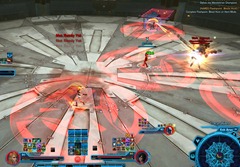 In the third phase Jos and Valk will appear together to fight the group. Jos doesn’t seem to use his nasty DoT on tanks when they reach 10 Execution stacks and instead prefer to use Maul instead. This maul attack still hurts a bit but seems less so than the DoT. Pick one and finish them off as the other does not seem to have any enrage mechanic when left alone.

Shae Vizla didn’t seem to get much buffs in hardmode. She didn’t seem much tougher or have any new abilities. She has 1.9 mil HP. 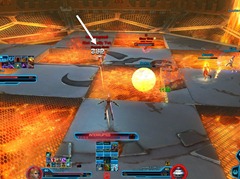