SWTOR Hardmode Battle of Rishi Flashpoint Guide. This flashpoint was released with Patch 3.1 on Feb 12, 2015.

The first boss of HM Battle of Rishi didn’t get much change from Tactical mode mechanic or damage wise. However, the enrage when one is killed hurt a bit more now so you may want to kill them around the same time. They both have around 733k HP.

Rarrook will place Displacement Mines on party members infrequently. They are large red circles you need to run out of. His other significant attack is a blue circle around him called Hindering Shockwave. This is something usually only the melee need to be aware. The other filler attacks from him are Death from Above and Unload. 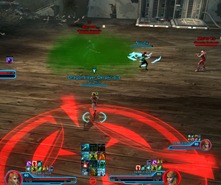 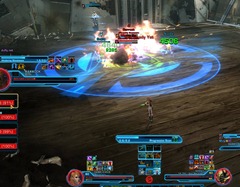 Marko Ka is an operative that will stealth, drop corrosive grenades (cleanseable) and summon droids. The support droids you need to kill ASAP as they heal the bosses otherwise. The assault droids he summon are immune to damage but will kill themselves after deploying a long red telegraph. He other attacks are Aimed Shot and Suppressive Fire (frontal AoE?). 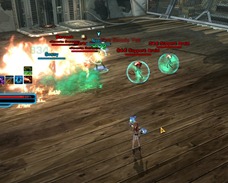 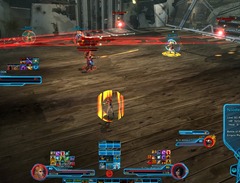 Commander Mokan is the new bonus boss of Battle of Rishi HM. This is a fight that requires a very high amount of group healing, cleanses, and coordination. If you wipe to this boss (you will die a couple times at the least), there is a very long run back as well. This fight has very little tank damage so we ended up using a composition of 2 healers and 2 DPS to successfully defeat him.

It is very important to understand how Compound 9 (green) and Compound 17 (red) works. Compound 9 is a green stacking debuff you can get from either the green circles dropped on a random group member or from Mokan’s Compound 9 Scatterblasts. 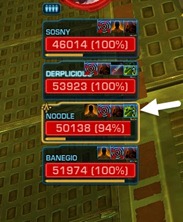 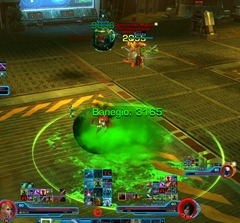 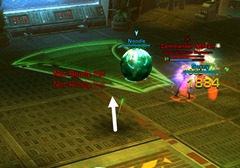 There is a limit to how many stacks you can get. You will die instantly at 5 stacks. Cleanse will remove 1 stack at a time but purge will remove all stacks. 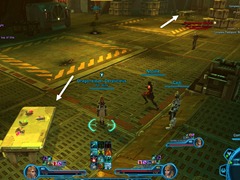 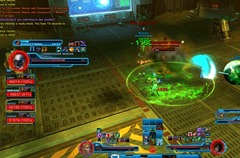 To counter the Compound 17 damage you will want to have 3 stacks of Compound 9 debuff. While this make you take more damage than 4 stacks, you won’t run the risk of dying instantly once Mokan starts casting Compound 9 again as he has a chance to drop a green circle on a random group member that will instantly raise their stack by 1.

The basic pattern to the fight is Mokan wil start off doing a Compound 9 Scatterblast on the tank. This is a 2.0s channeled attack that is unavoidable and put 2 stacks of Compound 9 on the tank (or DPS tanking him). You will want cleanse the stacks right away as they will add up fast. Due to the increased cooldowns on cleanse we found it is best to have two cleansers to make sure that the tank doesn’t reach 5 stacks and die.

The Compound 17 DoT will do about 4 x 7k ~30k damage to each person assuming everyone has 3 stacks. Group might need to stack for efficient group heals as the healer(s) tried to top everyone off. The tank’s stacks need to be lowered immediately as Scatterblast will follow that adds two more stacks. This can be either lowered by using cleanses or tank can run to the table and use the injectors if the healers are busy toppng everyone off.

This pattern basically repeats until Mokan is dead:

Obai and Vodd didn’t get much upgrades from tactical mode. They gain one new mechanic in hardmode and that is about it. Each have 733k HP.

The main thing to watch out for is Paralyzing Forcewave from Master Obai which is a yellow PBAOE and Lord Vodd’s purple Stunning Forcewave. They are both easy to get out of. 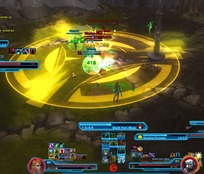 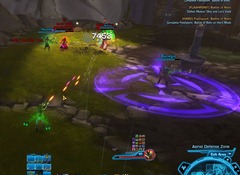 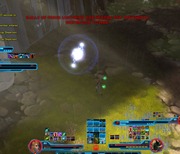 Shield Squadron Unit 1 got a couple buffs in hardmode but it is still fairly easy compared to the bonus boss. He has 900k HP.

The first thing you will probably notice is the new grapple that pull your group next to the walker boss right before his Electrical Megastorm channel. Not a hard mechanic but at least it keeps thing interesting. You will want to actually run to the back of a console and activate it to shield yourself from the Megastorm damage, which got some buffs in hardmode. 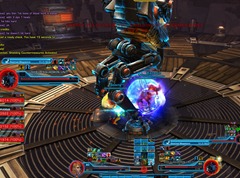 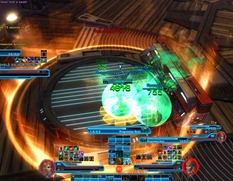 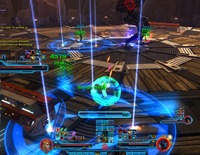 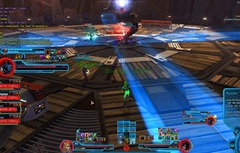 Lastly, adds are called at around 50% and 5%. First wave is a bunch of low HP adds that can do some serious damage if not killed quick. Second wave has two elite adds you can ignore until the boss is killed. 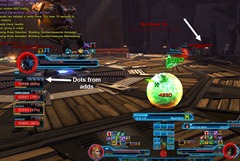 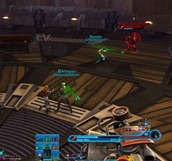