Malaphar the Savage is the first boss of the instance and should be quite easy for your raid group if you intend to progress through the entire instance. The basics of this fight is to get inside his circle to boost your own damage/heals but also increase the damage you take (stacking debuff). Step out of the circle to remove this buff when the incoming damage overwhelm your healers. Adds also spawn frequently and need to be taken care of with the boss’s Spear Toss ability if possible.

There are no additional mechanics but the incoming damage per stack of Savagery is much higher, forcing you to step out of the circle at approximately 10 stacks (exact number is dependent on your healers) to clear it before returning inside the circle. Tank swap is needed whenever the adds arrive. Boss and adds have higher HP, and you might hit enrage if you don’t use the Spear Toss red circle on the adds.
Boss Abilities

Savage Flurry is an autoattack of 5m range from both the boss and the adds. It is a fast attack that can hit twice within one second. Malaphar’s attack hits harder than the adds and damage you take from it depends on your Savage stacks (3.4k dmg per hit at 2 stacks).

Savagery and Exhaustion are the two debuffs you gain depending on your distance from Malaphar. There is a big circle around Malaphar, stay inside the circle to gain Savagery and stay outside to gain Exhaustion, The two debuffs are mutually exclusive so you can only get one. You gain one stack of the debuff every 5 seconds. 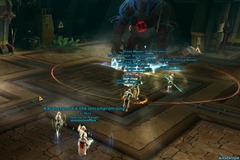 The strategy is to stay inside the circle and gain as many stacks of Savagery as you can before the increased incoming damage becomes too much for your healers to handle. In hardmode this is usually around 10 stacks but may vary depending on your gear level and your healer’s ability. The raid leader will need to make a decision pre-pull on what number of stacks to pull out.

Once you step outside the circle, you lose all the stacks of Savagery right away and become to gain Exhaustion debuff which decreases your outgoing damage/heals but no longer increase your incoming damage. This debuff is not something you want to keep so as soon as you clear your Savagery stacks, you should go back into the circle immediately.

Basically, gain Savagery stacks until heals becoming an issue, then step outside the circle, clear your stacks and go back in.

Hammer Smash is a periodic AoE from Malaphar that comes every 5 seconds. This is your primary raid wide damage (internal damage) that will determine how many stacks of Savagery you can handle. With low stacks, this ability only hits for 5k but with high stacks this ability can hit for 25k (about half of your HP).

At 30 seconds into the fight and every 50 seconds after, 3 Feral Massassi adds will spawn with 71k HP each.

This is a forced tank swap. Have the main tank swap with the offtank on the boss and then have the previous main tank pick up the adds (Offtank need to ensure they get rid of their Savagery buff before taking on the boss).

Soon after summoning the adds, Malaphar will perform a special Spear Toss attack. This is a red circle on a random raid target (main tank excluded) that will follow the target for a few seconds. Ideally, the person with the red circle should run it to the adds as the giant spear that lands after the circle will knock down and damage the adds. If your DPS is poor (i.e. you are hitting the 4:20 enrage timer), you should try to do this as much as possible. Unfortunately this isn’t always possible so if you can’t manage to do it, just kite the circle away from the raid. 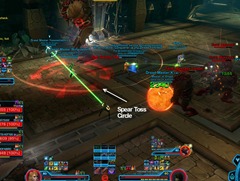 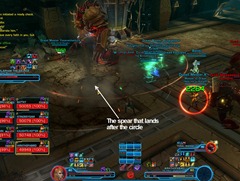 Everyone run in and stand inside Malaphar’s circle. Your raid leader will call out at what Savagery stacks to step outside the circle and clear your stacks. Note that it can take up to three seconds sometimes for Savagery to fall off, so be patient. To maximize DPS, you should clear around stack 10, but this could vary depending on your gear and healer’s abilities. Once your Savagery stack falls off, step inside the circle immediately.

In general, the fight is a tradeoff between wanting to gain stacks to do more DPS to Malaphar, and lose stacks so that you do not die to the periodic raid damage. When you receive the red circle (Spear Toss), try to kite it on top of, or near the adds, which will knock them down and deal damage, aiding to kill them quite a bit faster.

Tanks: The challenge is that the main tank will continue to gain Savagery stacks, increasing damage received, since the main tank is unable to run out of Malaphar’s circle. This means that you will need to periodically tank swap. The logical timing is with each set of add spawns. One good way to do this is drag Malaphar to the new add location. The tank with Malaphar will aggro and AoE taunt the adds. Once this has been done, the off tank will single taunt Malaphar and step in front, while the old tank

The first 30 seconds is tank and spank, since the Feral Massassi adds do not spawn until 30 seconds into the fight. Once the adds spawn, have the offtank clear his Savage stacks and do a tank swap with the main tank. The previous main tank will go pick up the adds and hold them outside the circle. Whoever get the Spear Toss circle will need to run into the adds if possible and use the spear to help knockdown and damage the adds. If the adds are not dead, DPS must swap before the new wave in order to ensure the raid is not overwhelmed with adds. We recommend using 1-2 DPS with good AoE in order to quickly eliminate these adds, which also helps out your healers.

DPS: This is a very straightforward fight to DPS, although the DPS required is quite a bit higher than the first boss in Ravagers Hardmode, Sparky, which does not really have a difficult enrage timer. Make sure you do not get greedy and stay in too long unless you are about to enrage. When you get to higher stacks, rotate your defensive cooldowns. Also, if it is your job to help kill adds, swap quickly to them.

Heals: Although Malaphar is not a very difficult fight to heal compared to a few of the other bosses on Hardmode, there can still be a considerable amount of damage to look out for, especially if tank swaps are slow, adds do not die, and if people do not clear their Savagery stacks efficiently. This fight is very AoE heal intensive so with Kolto Probes, Recuperative Nanotech, and Kolto Waves, Operatives excel the most, but any healer should be able to do extremely well since AoE heals are very plentiful in the current tier. It is very easy even for an experienced healer to fall behind in this fight if distracted or if healers spend too much time helping to DPS, so be careful. The only damage done to the raid should be Malaphar’s repeated Hammer Smash ability, so just swap between single target heals on tanks and your big AoE heals.

No additional strategy information is available at this time.

Healer PoV:
Not available at this time.

Love the content here, but my team does this fight a little different as far as the tanking goes. Mind you, this strategy requires a strong AoE and fairly well geared DPS.

We have the tanks stand in the center of the room and switch back and forth from there using the square as somewhat of a binding box. When the adds come out, one of the tanks AoE taunts, bringing them to Malaphar. The DPS on add duty then AoEs on Malaphar or single targets the adds. The person with the spear toss runs it out of the circle. Rinse, repeat.

A couple things that make us choose this strategy over the basic one:
It’s easier to clear stacks and know where the boss is.
Tank swap can be a little quicker and won’t be as forced. The tanks can single taunt back and forth without taking as many stacks of Savagery which means less damage.
DPS with AoEs continue to damage Malaphar throughout the fight.

– Hooc, Defenders of the Republic, Harbinger

pfft this fight is so easy even though the pug group i did it with needed 10 tries we downed him with only me dying at the end, its simple stay inside circle behind boss, move red circle away from raid group but close to tank that aggroes adds then place AOE on boss where adds are taken while you build up alot of stacks and rinse and repeat. though quick note he will reset so if its going wrong just have tank reset malaphar and you can do it again without any deaths or many deaths XD

Are adds guaranteed to spawn from those spots in that order?

Hello, is there differences in 8HM and 16HM ?
Thx for the time spend to answer me,

Looking at the Savagery debuff, it doesn’t mention that it increases healing. However, Exhaustion does lower healing.

Does this mean that healers should be looking to drop their Savagery stacks more often than DPS?