The Underlurker will rotate through a simple sequence of summoning adds, casting Rage Storm, and casting Devastation (cross). The goal is to deal with the adds quickly enough that you have time to burn the boss before his relatively short enrage. This boss is feared greatly on Storymode, but is one of the easier fights on Hardmode as long as DPS is not slacking. Also, note that Bounty Hunters have some additional talents which can greatly help with killing the adds quickly.

This boss is notorious for being buggy since the launch of 3.0, but we feel that it is working as intended in the current format. However, since game positioning can still be fickle, the cross mechanic must still be treated carefully.

The boss has a moderately large amount of hitpoints to burn through, although the adds have the essentially the same health (just 10k more). Rage Storm is much more punishing and will quickly kill unshielded players so it is even more essential to kill the adds on time. The most significant change from Storymode is that the adds apply a slow, which can interfere with going from the cross to the adds after Devastation, as well as making it to a safe rock for Rage Storm. The only way to ensure the raid is safe is to kill off all adds so that the slow is no longer in effect.

Hurl is the Underlurker’s primary attack on the main tank. It has a 2.1 cast time during which he will pick up a huge rock and throw it at the tank. This attack can deal quite a bit of damage on Hardmode. 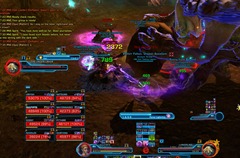 Three Lurkerlings will spawn 15s into the fight and then every 50s after. They have 109k HP each (330k HP total) on hardmode and will start chain spamming Jump Smash and Impedance debuff. Impedance debuff essentially prevent you from moving. Everyone, will need to focus and kill the adds before Rage Storm comes on. 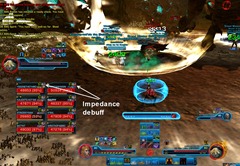 Unfortunately their Jump Smash animation is quite annoying and tend to drastically reduce your FPS. Since they have boss immunity, you cannot grapple or pull them closer to the melee DPS. Melee DPS should try kill the ones closest to them and let the ranged handle the far ones. 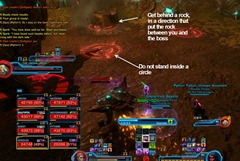 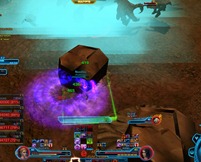 Rage Storm is a 7s channel from the boss immediately after Collapse. This channel deals massive damage and will likely kill anyone not behind a rock. The damage varies but you can expect anywhere from 3k to 25k per tick. There is a knockback at end of Rage Storm which you can avoid if you use something like Hydraulic Override or Hold the Line. These moves will also negate the effects of the cast itself.

Shortly after Rage Storm, the Underlurker will does his Devastation attack. It is a 7s channel where a blue cross form from his body. Tanks need to go on the cross arm that are in front and back of him. 2 DPS and 1 healer will need to stand on each of the side arms. Each cross arm need to be occupied. If someone dies in the fight, you may need to rebalance the arms by having an addition person standing outside the cross. 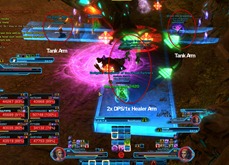 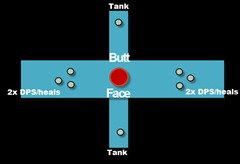 Usually the entire raid will run back to the Underlurker immediately after Rage Storm to get in position. However, he has a tendency to randomly leap to a tank before casting Devastation. This can throw your raid off, causing you to fail this mechanic.

After an initial burn on the boss which lasts a moderate amount of time (15-20 seconds), there is a simple rotation to the mechanics of this fight:

In total, each set of phases lasts 45 seconds, giving you almost exactly five rotations of this until the enrage. The key to success is moving through these phases with smooth transitions and playing aggressively to ensure you do not fall behind on DPS. You will likely repeat this 4-5 times in order to kill the boss, after which point he will enrage.

We start the fight with a strong initial burn, with all 8 raid members doing maximum DPS and all class buffs and adrenals popped to make as much progress as possible on the Underlurker for the enrage. Since you will have to meet the DPS check on the adds every single phase anyway, there is no point using class buffs on any set of adds. If you are first learning the fight, you may consider doing this, but we do not recommend relying on it.

Note as a general strategic point that you can run with 5 DPS for this fight, since like Storymode, this fight is largely a DPS check. The difference is that the rest of the bosses in the instance are much more difficult on Hardmode than on Storymode. So you can think of this as a boss which gates Revanite Commanders and Revan. You are not likely to kill the rest of these bosses in ToS HM if you cannot handle the Underlurker with ease.

But if you need to use 5 DPS to speed up the fight, feel free to do so since it can definitely help. Our first kill in 186 gear for Shadow of Revan used this method, as well as several other kills during the first two weeks since we feel it is the superior way to kill the boss. However, in recent months since getting 192 and 198 gear, we no longer bother with even having a tank respec DPS or swap to a DPS toon. You will almost surely finish the add phases much easier and this reduces some of the chaos and stress. However, healers must work a bit harder with this method, and you will need to use classes with a good cooldown to stand in the tank position of the cross for Devastation (Sages/Sorcerers, Snipers/Gunslingers, Operatives/Scoundrels in Scrapper/Concealment spec, and Marauders/Sentinels).

If you are using this method, note that the solo tank cannot stand in front of the cross every single time on Hardmode, so he must alternate with other players in the following manner:

…and so on until the fight is over.

Generally we assign 2 DPS to the “entrance” add, 2 DPS to the “exit” add, and 1 DPS and the tanks to the “center” add. We move together to the same rock for Rage Storm both for the purpose of stacking for heals, as well as (primarily) to ensure that the Underlurker does not leap around the room, which has been known to cause the cross to render improperly in the wrong location and thus fail and kill people when Devastation finishes casting.

Tanks: Only one tank is needed for this fight on Hardmode, although having two tanks can in some cases make it a bit easier on the healers. If using a solo tank, there is nothing complicated to handle and the solo tank will continue taunting and aggroing the Underlurker the entire time, only swapping between front/back on the cross as explained above. If using two tanks, you should swap off after each Devastation cast, while alternating front/back positions. Tanks should be helping DPS adds and usually we have the tank drag the Underlurker to the middle add so that any AoE can benefit DPS on the Underlurker while adds are being killed. In the meantime, the tank on the Underlurker can contribute DPS on the center add. If running 2 tanks, the off tank can help on whichever add seems dying slowest, or else just help the main tank on the center add.

DPS: During each phase, try to stack with others as much as possible for AoE heals; do not stand out alone somewhere for no reason. If you are a melee DPS, you need to be especially careful to rotate all your cooldowns and stand as far away from each add as possible while DPSing it. Note that you will take a lot more damage standing directly on top of an add compared to standing at maximum melee range (4 meters). Never fluff DPS on the boss or multiple adds unless your raid is easily able to kill each wave of adds. Your priority should be killing whichever add that you are assigned to as quickly as possible, and then you can help others or simply return to the boss if they are almost finished.

Since most of your time will be occupied with killing adds, you will need to make the most of any uptime on the boss in order to kill adds. This means doing your maximum DPS rotation during the long downtime at the beginning of the fight, as well as focusing on very high DPS while positioning yourself for the cross during the Devastation cast. While getting into position correctly is important, from the moment the rocks are destroyed after Rage Storm, you cannot slack.

Note that any DPS with ranged abilities can run out for a GCD to either side of a rock, hit the boss with that GCD, and take no damage. So any moves that can be easily cast while moving or that activate instantly can still contribute DPS to the Underlurker while hiding for Rage Storm. This makes ranged DPS an even more significant advantage for this fight, along with Troopers/Bounty Hunters which can pop Hold the Line/Hydraulic Overrides and take no damage from Rage Storm.

Heals: This is one of the easiest fights in ToS HM to heal assuming that you do not have a heavily melee composition (which takes more damage from the Underlurker’s adds since their damage profile is melee based). It is also easy for the ranged to stack for heals in the middle while killing adds. Healers can easily AoE heal the raid if everyone goes to the same rock or two for Rage Storm, as well as while grouping up for the cross during the Devastation cast. Nevertheless, it can get difficult if DPS is slow to kill the adds and people end up taking not only more damage from the adds, but Rage Storm as well since people will be exposed longer.

One very important trick is that healers can do a reasonable amount of DPS to help ensure that this never happens. This is a direct case where doing more DPS as a healer can actually work to reduce the healing necessary, so while your primary job is to keep everyone alive, don’t underestimate this. If both healers put in a few GCDs on an add or two, or even just throw DoTs or AoE on a few adds. Alternatively if your group is able to kill the adds, you can throw some DPS GCD’s on the main boss. You should be doing this whenever the raid is mostly topped off. As you get more used to the fight, you will understand when you have time to DPS and when you need to be healing. In particular, watch out for the health of the main tank on the Underlurker during all phases, as well as any DPS in melee range of the adds. 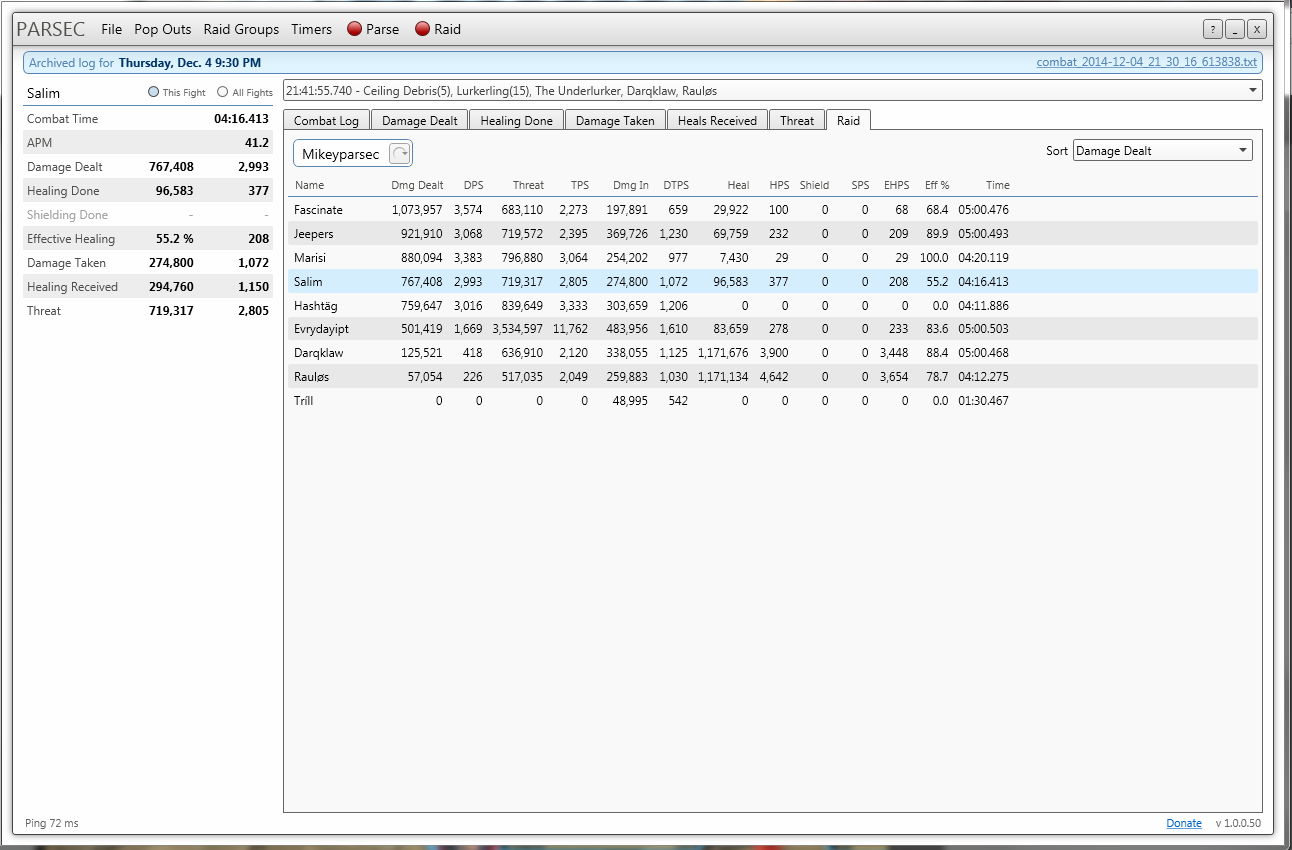 
In this video, one of our main tanks (Smugglin) outlines the Underlurker HM fight from a tanking perspective.


Healer PoV:
No perspective available at this time.