A guide to the Outfit Designer coming with Patch 3.2 Rise of the Emperor. Updated April 28, 2015.

How to use the Outfit Designer

When you first open up your character panel after 3.2, you will see a bunch of outfit tabs on the right side of your screen. Each tab can be used to save a selection of armor for appearance purpose only.  The very top tab is for your gear that modify your stats. What this means is that you can now change appearance without having to swap out gear and augments! The outfit’s tab appearance will replace your gear appearance without modifying your stats.

From now on, you place the items you like the stats into the gear tab, which will function same as before. However, if you desire an alternative appearance, you can place armor pieces into the outfit tab, which will not alter your stats but your appearance. 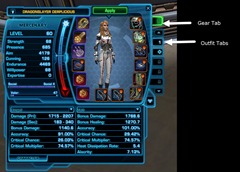 This outfit designer is not available for companions.

There are 16 outfit tabs to unlock per character. The costs are as follows (placeholders for now for both credits and CC).  You can pay with either CC or credits

Adding an armor to the outfit tab costs money as well. Each armor piece you add costs you 50-5k credits depending on your level. So two pieces would be 10k credits with a maximum of 7x5k = 35k at level 60 if you fill up an outfit tab. Note that there are no weapon slots. 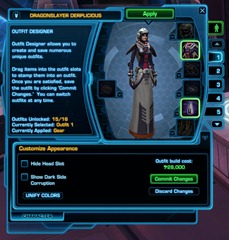 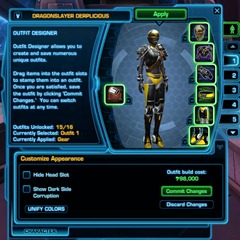 To finalize the armor selections for the outfit tab, you first press Apply and then Commit Changes. This will give you another warning that the items you select will be bound to you and apply the outfit on your character. 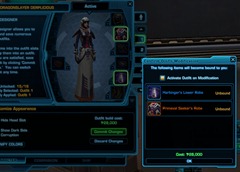 Each has their own independent hide headgear/show dark side corruption/unify color options that do not affect other tabs.

What gear can you use in the outfit designer?

Any armor can be used, this includes adaptive/light/medium/heavy. Previously there was a restriction that prevented light armor users from using medium/heavy armor but that restriction was removed.

Rarity wise, you can use any white/green/blue/orange/purple/legendary gear in the outfit designer. There are no restrictions there.

As mentioned earlier, there are no weapon slots so you cannot use the outfit designer to modify the weapon appearance.

Once an armor is stored in the outfit tab, you can destroy that armor piece in your inventory if you wish. That armor appearance will remain until it is replaced by something else. You can also use the same armor in multiple outfit tabs.

So basically you can have the same armor piece in multiple outfit tabs with different dyes but these dyes are destroyed if you remove/replace that armor piece from the outfit tab. 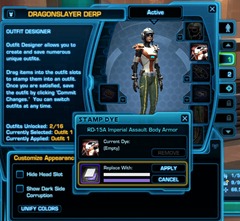 You can unify each individual piece with the chest color in the outfit designer.