GW2 is rewarding out Mini Llama for those that participate in community run PvP tournaments. These Mini Llamas can be upgraded to lavish llama in the mystic forge.

Do you feel a deep, insatiable desire to own and care for a Mini Llama of your very own? What if you could take that Mini Llama and gently place it and a few of its identical friends into the Mystic Forge, with the intent to—dare I say—create a progressively cuter version of it? What if I told you that the Mini Llama, in its final form, could dance? 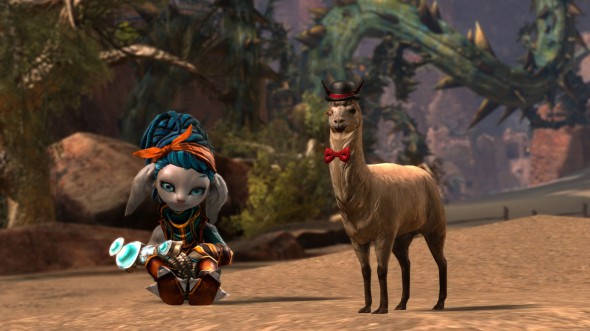 The good news is that we live in a day and age in which all of the above is possible, and today I’m going to tell you how you too can own the most dapper, majestic, and snuggly mini of them all. In short, all you’ll need to do to work toward owning one of the cutest four-legged mammals to ever walk the face of Tyria is mercilessly crush your enemies on the field of battle. Sounds easy enough, right?

We’re happy to announce that beginning today, you will have the opportunity to earn Mini Llamas (in addition to the existing gem-prize rewards) by participating in approved, community-run PvP tournaments. We’re working with tournament organizers for events taking place every week in both North America and Europe, providing you plenty of opportunities to compete. With each one of the available tournaments providing a different experience—from events that focus on teaching and educating newer players to tournaments featuring skilled players duking it out for cash prizes—there’s a format that will work for you.

You don’t need to win these tournaments to earn a Mini Llama—in most single-elimination events, you’ll only need to win a single round to earn a prize. As a general rule, placing in the top 50% of any of the following tournaments will earn you a reward. As a note, you can only earn one Mini Llama per week, but you can participate in as many events as you’d like.

Take a look at the list of events below, figure out what works best for you, and sign up today!

The Academy Gaming Weekly is focused on creating a safe environment for newer PvP players. This is primarily accomplished by barring veteran players from participating—specifically players who have recently won a Go4GuildWars2 Cup. The Academy Gaming Weekly Cups feature a free-agent system that allows players to join the tournament as individuals rather than teams, which is great for those of you who have yet to find a permanent group to play PvP with. Come find new friends to play alongside!

The AspectGG Pug Quest was created with the intent of having seasoned PvP players share the knowledge they’ve accumulated with newer players and teams. While newer teams can join the tournament as a group, players are also encouraged to take advantage of the free-agent system and sign up alone. This is a double-elimination tournament, meaning you’ll have two opportunities to stay alive in the tournament.

The longest-running weekly tournament in Guild Wars 2, the ESL GW2 5on5 Weekly Cup is open to players and teams of all skill levels.

In the Go4GuildWars 2 Cups, teams will compete on a weekly basis for a piece of the $500 USD prize pool, with the ultimate goal of qualifying for the Monthly Cup and its $1500 USD prize pool. While these cups will feature some of the fiercest competition you’ll see in Guild Wars 2PvP, all teams are encouraged to sign up for the event. After all, you only need to win one round for a Mini Llama!

To transform your Mini Llamas into a Mini Fancy Llama, simply combine three Mini Llamas in the Mystic Forge with one Essence of Llamatic Elegance, found at any laurel vendor. Once you complete this, you’ll be well on your way to obtaining the Mini Lavish Llama, the most distinguished and handsome Llama in Tyria. The path to the ultimate llama will be soaked with the tears of your opponents, but it will be well worth it if you can accomplish the feat.

We’ll see you in the Mists!

That is one goddamn fancy llama.

But I dun have a team. :< /foreveralone

You can join some as a free agent.

Most lavish lama in the land? You have my attention.

They need to add a Drama Llama that periodically cries out “Why won’t anyone PAY ATTENTION TO MEEEE??”

I’m pretty sure there are already enough of those in the game :P.

Come on guys is a Esport, free llamas for all.

how do a hat, a monocle and a bowtie improve a llama anyhow? well, nice try from anet to get some more pvp going. id stick with a standart llama if i would ever get one.

Nice troll. Clearly you couldn’t be genuine, asking questions such as how a bowtie improves a llama.

sheesh, im not a troll. i realy prefer the normal llama, angry white man. its all said clearly in a calm and reasonable way. you are the true troublemaker here, my friend.

Sorry, I was just joking around. I meant to suggest that only a troll wouldn’t like the bowtie as it objectively improves the llama; I know this isn’t the case for everyone. 😛

putting hats and other accessoires on animals gives me a cheesy feeling. id rather have anet give the llamas colors or patterns to make them different. make them bigger, give em funny animations/sounds. something like that and id be fine with upgraded llamas. but i know people like animals with hats and monocles, otherwise they wouldnt spend 100 laurels or something on that cheesy (my opinion) cat von snuffles, right 😉
there is nothing you can do when you have multiple llamas anyway, so even I would upgrade em, but keep the llama hidden in a box. as i mentioned earlier, that wont happen anyway.

What if you could take that Mini Llama and gently place it and a few of its identical friends into the Mystic Forge, with the intent to—dare I say—create a progressively cuter version of it? What if I told you that the Mini Llama, in its final form, could dance?

few
fyo͞o/
adjective & pronoun
1.
a small number of.
“may I ask a few questions?”
synonyms:a small number, a handful, one or two, a couple, two or three; More

2.
used to emphasize how small a number of people or things is.
“he had few friends”
synonyms:scarce, scant, meager, insufficient, in short supply; More

noun
1.
the minority of people; the elect.
“a world that increasingly belongs to the few”
synonyms:a small number, a handful, one or two, a couple, two or three; More

The good news is that we live in a day and age in which all of the above is possible, and today I’m going to tell you how you too can own the most dapper, majestic, and snuggly mini of them all.

< col Hiiiiiii Friends….'my friend's mom makes $88 every hour on the internet . She has been unemployed for eight months but last month her payment was $13904 just working on the internet for a few hours.

< Hiiiiiii Friends….'my friend's mom makes $88 every hour on the internet . She has been unemployed for eight months but last month her payment was $13904 just working on the internet for a few hours.