SWTOR Ziost Missions Guide with a list of reward and achievements for completing the story missions on Ziost.

Getting all 5 Aegis squadron achievements will grant you the Aegis of Ziost legacy title. They have a 4.5-5 mins respawn and path in the red line shown on the maps.

There is a hidden achievement for defeating Grundorsen Maelo in the top section of People’s Tower Plaza. You can get to that area during the On the House mission by using the custom speeder. He is a champion with 160k HP with a respawn timer of ~4.5-5 minutes. 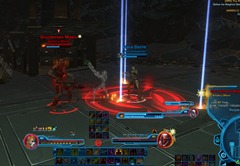 There is a speeder and decoration reward for completing various achievements associated with Ziost missions. Some of these achievements are only obtainable while you are inside a specific story mission instance so that is why I want to emphasize the achievements first so you don’t have to repeat the missions on another character for the achievements.

There are instructions on how to complete some of the achievements under the specific mission guides at bottom of the page.