SWTOR Colossal Monolith Ziost operation Boss guide. This is the new instanced operation boss in the Fractured Tract of Ziost with both storymode and hardmode versions.

Note: As of the May 12 patch, this boss has changed slightly on hardmode. You can still ignore the color mechanic but you will likely need 3 healers, 1 tank and 4 dps composition to heal through the buff the Monolith gains at end of the channel (lots of burst cleave damage on tank).

Everyone need to avoid the purple rifts on the ground and tanks will need to tank swap at 1-3 stacks of Bite Wounds debuff. Players will also need to move out of white circles which are placed on raid members and an orange circle which follows a single random player. In addition, there is a third telegraphed cleave mechanic on a random player that everyone else need to avoid.

Every 70s seconds, a raid warning will appear on screen and four differently colored circles will spawn. Raid members will need to walk into these circles to receive a debuff. After a short interval, the boss will walk towards to a rift on the ground and change its color with another raid warning. The players (two on storymode) with colored debuffs will need to run into that rift to break the boss’s channel. Failure to stop the channel will cause the boss to release his ultimate power and deal massive damage.

You will need to avoid the purple rifts on the ground as standing inside them will give you a debuff called Rift Touched that reduces your healing received by 50% and your movement speed by 90%. Tanks will need to also ensure that they do not place the boss on top of a rift as well as the boss gains increased damage output and reduced damage intake if he is on top of a rift.

Swipe is boss’s single target auto attack that is used as a gap filler when his other skills are on cooldown. Great Slam is a raid wide AoE attack on a 20s timer that cannot be avoided. This will make any attempts at stealth rez difficult.

This is a tank swap mechanic. Around every 18s the boss will cast Bite Wounds, a 1.5s cast. At end of this cast the main tank will be knocked back and receive a stack of the Bite Wounds debuff that lasts for 30s. Each stack reduces your armor by 10% and deals bleeding damage every 2s. While this doesn’t sound too terrible, at four stacks of Bite Wounds debuff you will receive another debuff called Ouch which reduces your damage dealt and movement speed for 40s.

Tanks will need to coordinate between themselves to tank swap at 1-3 stacks to allow the Bite Wounds debuff to fall off. The boss can become taunt immune from time to time so tank swap ASAP. 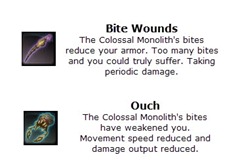 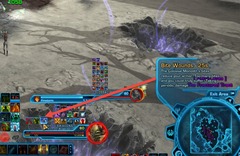 Siphon Energy is casted on a 15s cooldown. All raid members will receive a white circle under their feet and they have 4s to move out of it. Players who do not move out of it in time will be stunned for 3 seconds and receive damage after the stun. 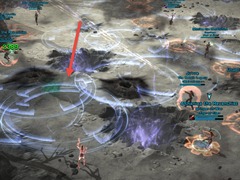 In addition to the white circle that all raid members receive, a random raid member will also be targeted every 30s. This player will drop an orange circle undernearth them every 2s for 20s (10 circles in total). This circle will last for 30s and deal damage to anyone standing in it. When this player receives the Lingering Destruction debuff icon, they should move away from the raid. 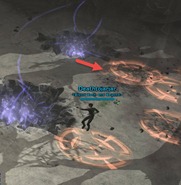 Terrible Shout is a massive telegraphed cleave with a 3s cast time and 20s cooldown. A random player will be targeted by the boss and receive this cleave. Everyone else have 3s to move away from this player to avoid the damage from the cleave. The targeted player and anyone else caught in the cleave will receive a DoT afterwards for 10s. Ideally tanks should call out that player’s name from target of target so they don’t move while everyone else is trying to get away.

This is a major mechanic with a raid warning on screen. Around every 70s you will see a red text on screen “The Monolith has exposed ancient energies of Ziost”, In random locations around the room four different kinds of circles will spawn, each with a different color.

Each colored circle will give the player a debuff that lasts for 1 minute in storymode. You only have 25s to pick it up before the circle disappears and each player can only pick up one circle. The circles spawn in the same location every time so you can prepare and have the same players stand near by the spawn of each colored circle. 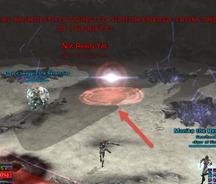 A few seconds after the circles disappear, the boss will start walking to a random rift and channel Breaking the Rift for 20s. This will turn that rift into four different colors You will see another raid warning on screen – The Colossal Monolith is going to siphon energy from one of the rifts! If the Colossal Monolith finishes the channel, he will receive a buff that lasts for 10s. While this buff is active, he will constantly spam Destruction of All, dealing massive damage.

To break the channel, the players with the colored debuffs will need to run into this rift and into the correct color. You will need two players to do this on storymode to break the channel. The debuff is removed when you step into the correct colored part of the rift so you do not need to stand in it and take damage from it. Tanks should have some cooldowns for this part as there is massive damage to tanks.

You can entirely skip this whole colored circles/rift mechanic by having the entire raid stack under the boss when he walks to a colored rift to channel his Breaking the Rift. Drop AoE heals and keep the raid up. Just watch out if the boss stands on top of a purple rift when he does this as he will deal increased damage. 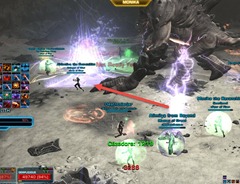 On 16m you will want players to spread out on a 30m circle around the boss to ensure there is space to place down all the circles.

Powertech/Vanguard tanks can reflect the raid-wide damage from the boss and are superior options for the fight (although not required).

In storymode, there wasn’t much need to skip the colored circles/rift mechanic since it was very forgiving. However, on hardmode this mechanic is much more convoluted which encourages raid teams to simply bypass it with good heals. The way the color circles work in hardmode is that you need the Ancient Protection buff from the Worldbreak Monolith world boss. At least four players should have it and they are the only ones that should be getting the colored circles as the colored circles deal massive damage to players without this buff.

Additionally, in hardmode you only have 15s before the colored circles disappear so you need to have a rough idea of where they spawn so you can get to them quickly. Not only that but the debuffs you get from the colored circles lasts for 2 mins and are not cleansed when you step into a colored rift like in storymode. If this debuff is allowed to fall off or if you run into a circle with same color as your debuff you simply die instantly. To counter this, you will need to coordinate the color switches and have players run into a circle that is a different color from their debuff so they can “swap” the debuffs and not allow it to expire.

For the colored rifts you will need all 4 players to stand in their respectively colored sections of the rift to break the channel.

This whole mechanic is a bit overwhelming and can be hard to execute. Previously you could have the raid stack behind the boss and ignore the colored rift mechanic easily but with the May 12 patch the boss actually complete the channel and gains a damage buff. This buff will make the boss cleave very hard for 40s but the old strategy can still be used by having a 3 healers, 1 tank, and 4 dps composition. Tank will need to kite the boss to avoid getting 4 stacks of Bite Wounds or have a dps that can taunt. During the Breaking the Rift channel they need to move away from rest of the raid and taunt the boss with 3 seconds left on the channel to avoid him from turning on the raid. The Rift Touched damage buff from channel completion lasts for 40s and during this he will only use his Cleave attack.  Make sure the boss doesn’t turn on the raid and have the healers do burst healing on the tank for the duration of the Rift Touched buff. Also ensure the boss doesn’t step on a purple circle as this further increase his cleave damage. Use raidwide defensive CDs such as ballistic shield from gunslingers/snipers if necessary. 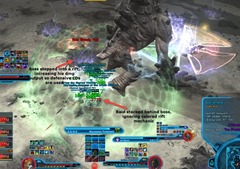 Curse of the Monolith

This curse mechanic is new in hardmode and can be a raid wiper unless you know what to do. One player in the raid (usually DPS but sometimes tanks) will get a purple debuff on them with a red text raid warning (PLAYER> has been cursed by the Monolith! ). This player will take an initial 20k damage and then cannot be healed for the duration of the debuff. They will receive –50% healing received with this debuff but any heals coming to them will damage them instead. Additionally, they will also damage nearby players and heal the boss so they need to move away from the raid when they have this debuff. This curse is on a 60s timer and seems to always land after the boss finishes his Breaking the Rift channel so just be ready for this. 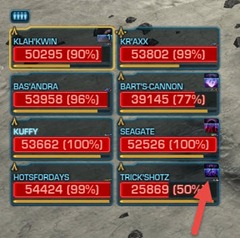 This debuff can cause some issues if coupled with other mechanics. If a player is low on HP and get this debuff they may die to the next raidwide AoE. If they get this debuff and the DoT from the cleave it also drastically decrease their chance of surviving.

Special thanks to Jedipedia.net (http://www.jedipedia.net/) for their help in deciphering the boss mechanics! A must visit for every German Star Wars fan.