New official GW2 blog post focuses on Lee Bledsoe, one of the developers behind the Reaper’s skill animations.

Hi, my name is Anatoli Ingram, and welcome to Hidden Arcana, where I’ll give you an inside look at the people and processes behind the development of Guild Wars 2: Heart of Thorns™. This week I talked to Special Effects Artist Lee Bledsoe, who helped to create the visual design of the new necromancer elite specialization, the reaper.

Lee has ten years of experience as a character animator. When the studio he previously worked for merged with a larger company, he realized that it was overflowing with character animators and needed visual effects artists. Lee saw the potential to expand his skills and was told that he could change positions as long as he was able to train in a month’s time. He did exactly that, and he even began training new visual effects artists, but the merger led to employee layoffs—including Lee—in favor of contract work.

Lee applied to ArenaNet because he liked the studio culture. Since all Guild Wars 2 professions have their own unique visual style, he also knew he’d have a lot of variety to look forward to. These days, Lee spends most of his time working on the creature team in preparation forGuild Wars 2: Heart of Thorns, but he still jumps in to help out when a VFX project is under tight deadlines—and that’s exactly what happened with the reaper. 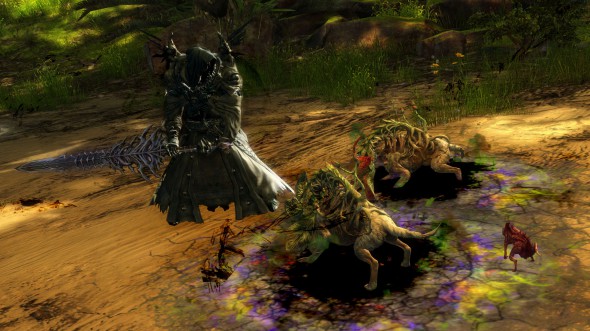 Even when things are running smoothly in video game development, there are always times when something needs to be done yesterday. An effect like the one used for the reaper’s elite skill can take three to five days of work, but Lee did it in one.

“There’s only one chance to get it right when we’re under tight deadlines,” Lee says, so he needs to have a strong understanding of the skill before he begins. Appropriately enough, rather than create the elite from scratch, he delved into ArenaNet’s effects library to resurrect existing textures and raise them up into horrifying new life. Despite that, the elite is Lee’s favorite among the effects he’s created for the reaper.

When creating an effect, Lee starts by talking to the designers to understand their vision for the skill or ability, as well as what it needs to do in gameplay. He says that he tries to find the lore behind everything he creates. Skill effects, like stories, have a beginning, a middle, and an end; the reaper skill effects Lee was tasked with designing needed a warm-up to signal that the skill is being used, followed by the effect itself, and then a finish.

He begins by sketching out a concept in Adobe Photoshop. If new textures need to be created, those are also drawn in Photoshop, and then the effect setup and particle creation happens in a 3-D animation and modeling program called Maya. From there, effects are exported into ArenaNet’s own software, ViewModel. ViewModel is where Lee defines what the effect actually does, using numerical values to determine things like speed.

The most important thing to take into consideration when creating an effect is how often it’ll be seen—the more often it’s seen, the simpler it has to be in order to avoid slowing down the game. The level of detail is also crucial; effects need to look good up close but reduce in detail and complexity when seen from a distance so that they don’t impact performance. Part of visual effects creation is deciding how and when that reduction will take place.

Overdraw happens when particle effects stack in front of each other on the screen; too much stacking results in a huge hit to performance. Lee and the other visual effects artists have special tools to check for overdraw by removing all the textures from the game and displaying particles as blue dots. When the particles overlap, they turn a lighter shade of blue. As the color moves closer to white, it becomes more likely that overdraw will have a negative impact on the game’s performance.

Because player skills are seen so often, ArenaNet’s visual effects artists have to be strict with how they look and behave. Effects like fire can be especially challenging since there are so many elements that go into creating a believable fire. Smoke, the flames themselves, embers, and the heat distortion in the surrounding air are all very different things that create one whole impression. The visual effects team tries not to use separate resources for each of those elements, as the more materials an effect is made from, the more likely it is to cause issues. 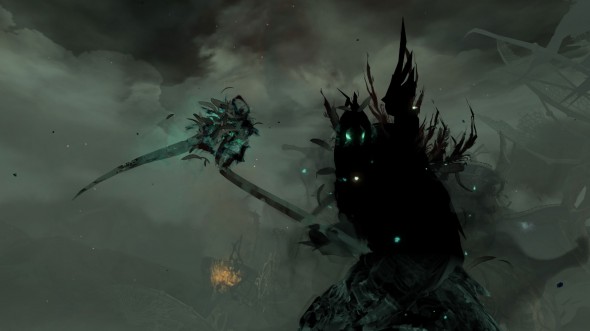 On our screens, fire looks like fire, even if it happens to be green fire. When we cast spells or use abilities, it feels like they truly came from our characters’ hands or weapons. The effects move with us, obey our directions, and seem as tangible in the world of Tyria as our characters themselves. But behind every lick of flame, grim swing of a scythe, or shimmer in the air is an artist like Lee, who conjured every second of the spell.

If you’re ready to see the reaper in action, don’t forget to tune in to the Points of Interest livestream this Friday, May 15, at noon Pacific Time (UTC-7) on the official Guild Wars 2 Twitch channel!

Where do you see new minion skins ?

“When creating an effect, Lee starts by talking to the designers to understand their vision for the skill or ability, as well as what it needs to do in gameplay. He says that he tries to find the lore behind everything he creates. Skill effects, like stories, have a beginning, a middle, and an end; the reaper skill effects Lee was tasked with designing needed a warm-up to signal that the skill is being used, followed by the effect itself, and then a finish.”

Because of this i love this game and the devs.
They put so much detail and hard work into such creations and many over things.
And the only thing many players look at are: Gold, fast instances, loot.

There exist things most of the players will never see, because they dont interested in it.
Sad.

I really appreciate the candid look into their processes. As a web game developer, I have limited knowledge of what it takes to do something like a new animation or texture. Getting into details such as telling us the programs used and explaining terms like overdraw really helps form an idea of just what it takes to make something like this.