Hello, my name is Tyler Bearce, and I’m here to talk about a significant change we’re making to the way that you’ll upgrade your World vs. World objectives in theGuild Wars 2: Heart of Thorns™ expansion. This is the system that allows teams to fortify their keeps and towers with things like stronger walls and additional guards. Afterward, I’ll explain our rework to the World vs. World ability system. 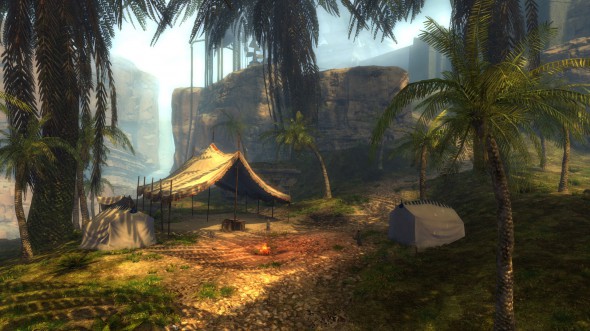 These are the changes we’ve made to the WvW upgrade system:

As an example scenario, let’s say the red team captures a tower. A timer on the “Defend the tower” event immediately begins. Each time an allied dolyak caravan arrives at the tower, the timer will decrease by five minutes. The Tier 1 upgrades will automatically occur sometime between 20 and 40 minutes as long as the red team can maintain control of the tower. The time depends on how many caravans safely make it to the objective. When Tier 1 completes, the tower immediately gains stone walls, an oil pot, a merchant, and a supply-hold increase. This process repeats until all the tiers are obtained and the objective is fully upgraded.

Along with this change will come an improvement to sentries. Sentries will greatly slow down enemy dolyak caravans and thus slow down objective upgrades. This will make the payoff for controlling the route between supply camps and objectives and ensuring a successful caravan more important, further enhancing the strategic objectives in WvW.

We made these changes to streamline and improve the existing system by making it cleaner, easier to understand, and more fair for players. Players no longer have to worry about taking supply from an objective while another player is waiting to have enough supply to upgrade it. Players also won’t have to worry about making an upgrade decision that other players may not like or feel like they’re the only person spending gold to upgrade objectives. This frees up players so they can focus on holding the objective until it’s upgraded and make sure the supply caravans arrive so the objective can upgrade faster. 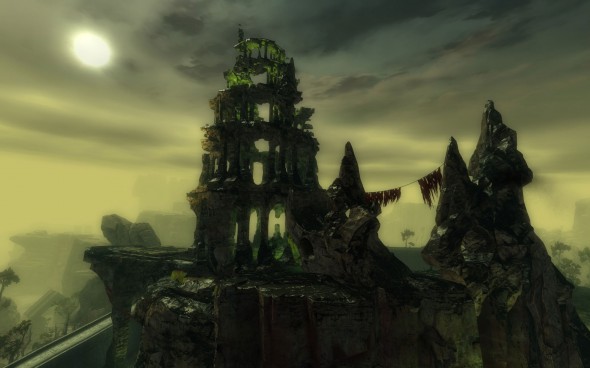 Now that you know the future of keep upgrades, let’s take a look at some changes that will affect how you upgrade your character in WvW. We made these changes with a couple of major goals in mind. First, we wanted to reduce the costs of ability lines to make them feel more attainable, even to the majority of WvW players with a world ranking under 300. Second, we wanted to rebalance specific ability lines that felt either too weak or too mandatory. Due to granting the powerful Applied Fortitude and Applied Strength effects, the Defense Against Guards and Guard Killer lines needed to be extremely expensive, but that meant players often felt obligated to spend their first 230 points on these lines before they could begin branching out into other ability lines. Also, those two lines—along with the Siege Might, Siege Bunker, and Mercenary’s Bane lines that simply granted single percentage increases per ability rank—felt very weak. This drove our decision to shorten the Guard Killer and Defense Against Guards lines to five, removing Applied Strength and Applied Fortitude.

These are the changes we’ve made to the WvW ability system:

In addition, we’ll be tracking world experience progress on the experience bar once your character hits level 80 rather than on the hidden blue WXP bar at the top as it does currently.

That’s all for now. See you on the battlefield!

16 replies on “GW2 WvW Upgrades in Heart of Thorns”

Wow, great improvements. I honestly have no complaints.

wow, even less stuff to spend ranks on…

they said before that they are developing ways for spending those points, we just have to w8 and see

it will be more balanced by removing it. especially for new players.
Cause by releasing an expansion they know that this includes new players

New players or not the “Applied Fortitude and Applied Strength” was a great buff, it also gave the players who killed, crushed, and destroyed in wvw all their time and effort some recognition and sat them apart from the new recruits, i don’t think this will balance anything… Even more so, because the new players just stay and follow the mindless blob anyway. (And now they dare to remove the “Senpai-status-buff”) … Just from reading this my constipation is getting worse.

it is a great buff but this is not there to distinguish pro’s from amateurs. A pro can be a pro based on the skills he develop from various right and wrong decisions during battle.
Also by changing the the trait system, merging skills, giving the ability to have 3 full trait line and basically all the changes that they will made upon that + the 5% of the ascended gear (most wvw players have already an ascended gear, new players will have an exotic at best), maybe all this felt too much along with those 2 buffs, and tho it will increase the power gap between pro’s and amateurs.

Ascended gear doesn’t make any difference…. yhea those extra “2” stats really make a huge difference, still to this day i have been playing with exotic armor sets. Still have no problems killing a enemy with full ascended crap .

The removal of gold costs for upgrades is a good move, IMO. It’ll help remove the feeling from dedicated WvW players of “why am I the only one losing money to help my server win?” I’m sad over Applied Fortitude and Applied Strength being removed, but I think the goal of making the playing field more level between veteran and newbie players is an understandable one. With these changes, I think I might have enough to instantly max another 2 or 3 WvW traits when the update hits.

Can someone explaine me where are my HoM pets???