Welcome, Tyrians! I’m Roy Cronacher, and I’m here today to bring you more juicy revenant information. Previously, I went over the profession’s base functionality and some initial sets of skills. So far we’ve discussed a legend and weapon set that are focused on defense and survivability, as well as a more condition-focused setup. Now we’ll be going over the healing-focused setup for the revenant. The new legend will offer a supportive playstyle and push the boundaries of healing through skillful play. Today I’m happy to introduce the staff and the Ventari legend.

That’s Not a Melee Weapon…

You might associate staves in Guild Wars 2 with a caster standing at range, performing powerful spells. With the revenant, we’d like to change that up, just as we turned the hammer into a ranged weapon for the profession. I mentioned in the previous blog that the hammer wouldn’t be the only weapon used in a new way, and the revenant will be the first profession to use the staff as a melee weapon in Guild Wars 2. 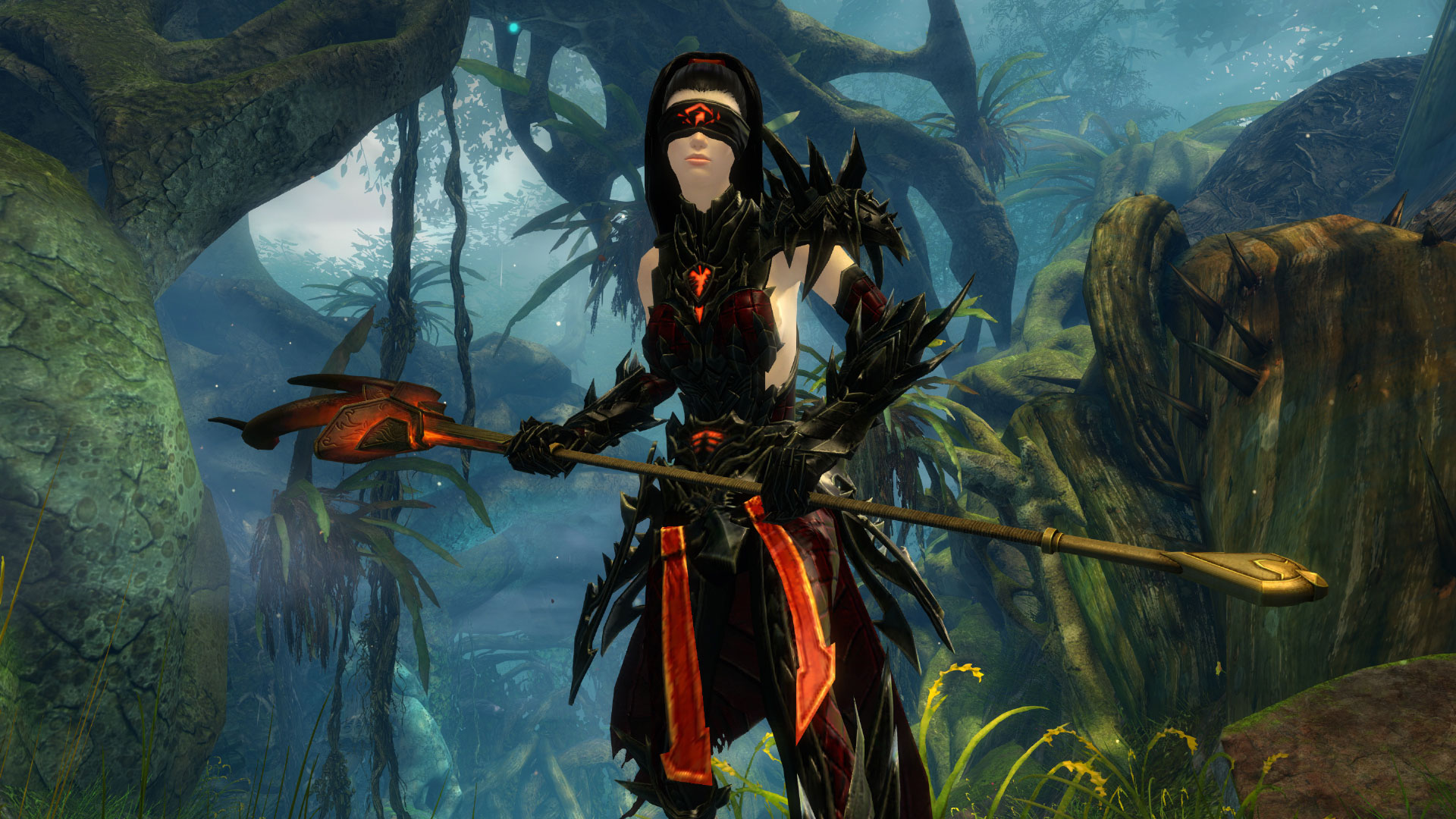 This weapon imbues your attacks with the power of the Mists, using a mix of martial and magical styles to support your allies. It’s very much about damage prevention rather than directly offensive attacks, to fit the legend’s theme. Let’s take a look at two of the skills you’ll have access to.

“Cleave foes around you with your staff, creating healing orbs for you and your allies.”

Surge of the Mists

“Charge forward, knocking back enemies that cross your path.”

I Can Outrun a Centaur!

Well… Okay, maybe not. They are pretty fast. Ventari has interesting lore ties that made him a strong candidate for a revenant legend, and since he was known as a peace-loving character, we figured he would be a great basis for the revenant’s healing skill set.

Most healing in Guild Wars 2 takes the form of pulsing spells, the combo system, or area-of-effect heals, but we wanted to push healing a bit more than what you’ve previously seen by creating a legend focused almost entirely on support. However, we needed an interesting way for healing abilities to interact and create a more active playstyle, and that led to the creation of Ventari’s Tablet.

Ventari’s Tablet is at the core of every skill for the Ventari legend. All of the skills either do something around the tablet or modify it, so positioning of the tablet is the key to being effective. This requires the revenant to command the tablet, and to communicate and interact with allies so that they can receive the tablet’s benefits. 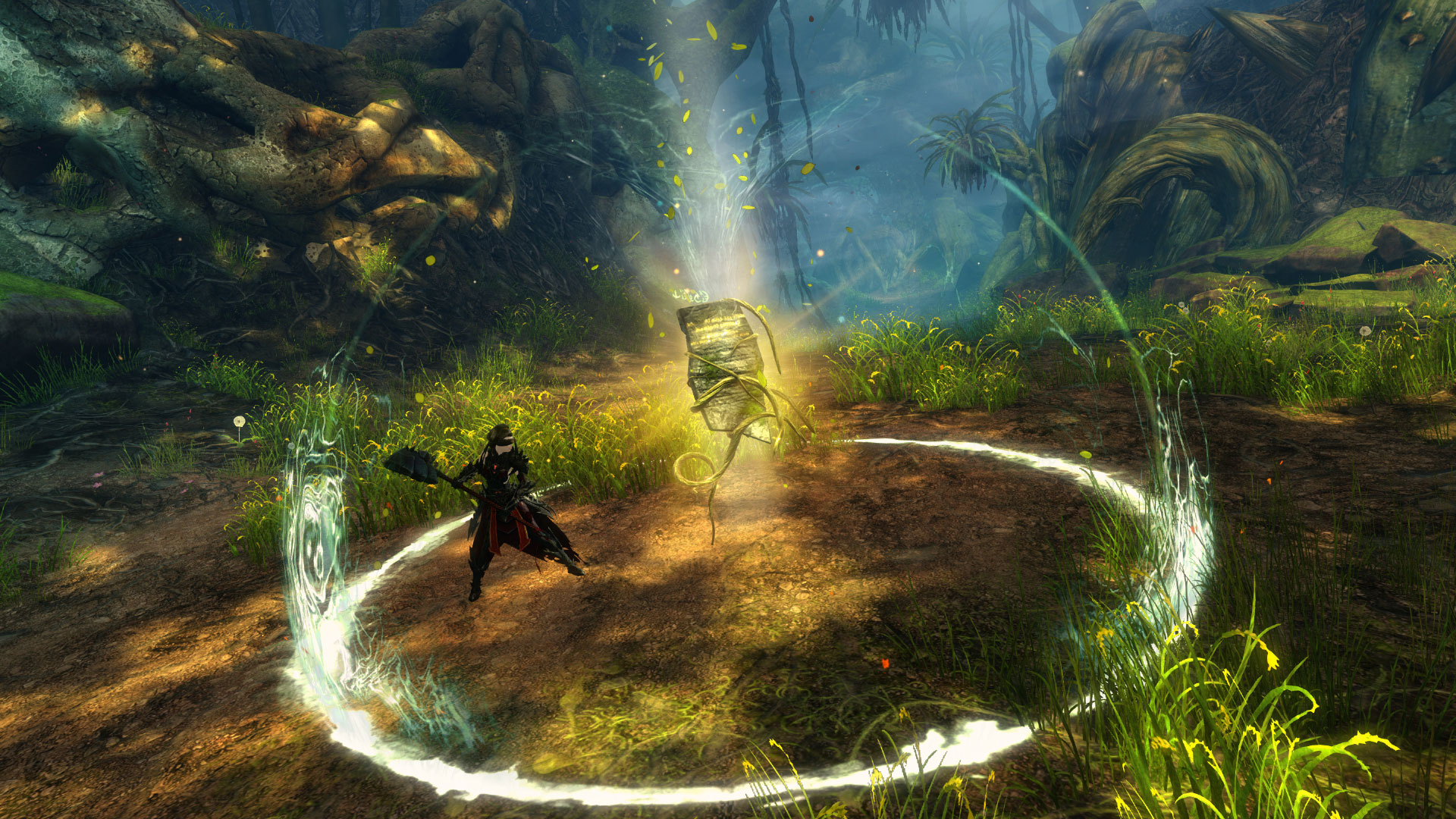 So, how does it work? When you first invoke Legendary Centaur Stance, you’ll have only one available skill. This skill will summon the tablet to appear next to your character. After you bring the tablet into the world, your skill bar will fill with the five legend-based skills, all of which manipulate the tablet.

There are two ways to dismiss the tablet when moving around between fights. Using your elite skill, Energy Expulsion, will overload the tablet with energy and cause it to disappear. The tablet will also automatically be dismissed if you move a certain distance from it. In both cases, your skill bar will flip back over to the previous state, and you’ll need to summon the tablet again to use the other skills.

Here are the skills you’ll be able to use after summoning Ventari’s tablet:

“Will the tablet toward the target location. As the tablet moves, it will heal allies it passes through.”

“Summon a protective barrier around the tablet that destroys enemy projectiles.”

“Force energy to erupt from the tablet, knocking back foes and leaving behind energy fragments that heal allies.”

And the Adventure Continues

We’ll have more weapons and legends to show off in the future, but this will have to appease your appetites for now. All of the revenant skills and abilities I’ve discussed today will be included in a future beta, so keep on the lookout for them. See you all on the battlefield!

I mind if there will be a price spike or not for healing runes and sigils with this support revenant and ranger/druid.

Doubt it. Looks like this spec will be best fitted for a bunker/support role in conquest mode, not so much in PvE.

so ventari isnt elite specialization…. ? or did i read wrong? maybe glint is elite? hMm?

You read it wrong. Its a legend not a specilization.

That’s… What I said.

Maybe Dhuum will be the elite

Another Legendary Stance. So far we have Defense, Condition and now Healing. I wonder if they will add pure DPS Stance to counter the healing….GLINT or Kormir would definitely do the trick. Lets hope so! Also I wouldn’t mind seeing Sword/X and GS in the next update!

Shiro’s gonna be the DPS one.

Great for a Sylvari Revenant 🙂 Can’t wait to see the staff skills.

Initially I wanted a Char revenant. It’s looking more and more like i’m going to go Sylvari, however.

Do you utilize a paypal account ? because if you do you can make an extra 500 week after week in your paycheck only working on the laptop 2 hours every day. see —> —> —> —>

So are revanant legends tied to the weapons currently being used? IE you have to use staff to use the Ventari legend? etc Or can you mix weapons with the different legends?

Staff is not tied to Ventari legend. This confused me as well.