Introduction: Fury is currently one of the few AOE specs in game, how ever with changes to the spec in update 3.0, the spec is now capable of doing a pure single target rotation to allow for added damage by sacrifcing AOE in the rotation. This allows you to swap between a single target burst and an AOE burst depending on the situation.

Note: This guide was translated from Rage Juggernaut. Rage and Fury have near identical rotations due to Vicious Slash merely replacing Retliation for single target. The rotation for Fury is actually easier than Rage, as such there is a higher insentive to run it.

and Select one or more of the following depending on fight.

The above utilities are outlined to make the most of your Raid Utility and PVE environments.

Fury revolves around buffing yourself passively in rotation to allow for a massive hit at the end of each ‘cycle’. These cycles remain the same but if you have no idea of your passives then you won’t know how or why the cycles are there in the first place.

The opener for Fury is rather simple and never deviates regardless of scenario. Berserk frontloads your Destruction and Force Charge grants Dominate, allowing the following Raging Burst to crit. Your Ravage will proc your Weaponmaster Set Bonus allowing the first Furious Strike to Crit.

As I mentioned above, Fury follows ‘Cycles’. One cycle ends and another begins, each cycle ends with a Raging Burst (or Force Smash depending on if you want AOE). Each Cycle subsequently bleeds Rage or lack there of into the next cycle.

There are 2 types of cycles. I like to call them the "Berserk Cycle" and "Ravage Cycle." These cycles follow one another, when an Berserk Cycle ends, the Ravage Cycle begins, so you can keep track of which cycle you’re supposed to be doing on the CD of Force Crush as it’s the first ability used in the Ravage Cycle.

Each Cycle follows another, even into the execute.

You may be asking where you can fit Dual Saber Throw into rotation for AOE? The best place I’d personally put it is in your Berserk Window’s Cascading power following your Smash, this will give near back to back AOE and will buff it with Cascading Power.

The location where Bloodthirst is placed mid-rotation is dependant on two things: Do you have Frenzy? And how much Fury do you have? If you prematurely use Frenzy, you’ll push to 30 stacks and will only have enough Fury to use one activation. So when Frenzy is up and Satiated has fallen off, it should look like this:

This Obliterate is the one at the end of your Berserk Cycle. You’ll consume your 30 stacks of Fury with Berserk, then gain another 30 stacks with Frenzy, then consume those with Bloodthirst, this priority will mean you don’t throw your rotation off and needlessly throw away stacks by popping Frenzy as soon as it comes up.

The execute changes the rotation slightly in favor of damage. The rotation itself doesn’t alter and neither does resource management, the only thing that changes is an ability shift in your Ravage Cycle to gain more damage. By substituting your Vicious Slash for Vicious Throw, you gain the 2nd most powerful critting ability in rotation without any draw back. Pretty good right? Your rotation will look like this:

What to check for?

What was the minimum hit of your Raging Burst/Force Smash? You’ll see a rough deviation of roughly 2000 due to Relic and Adrenal windows. If you land a 10000 Raging burst, your minimum should be the low 8000’s. If you have hit far lower than this 4k deviation, you’ve messed up a Shockwave window at some point or another.

Are you clipping Ravage effectively at the 0.3 second mark? Clipping Ravage with Furious Strike secures it inside the Cascading Power window.

Is your Raging Burst/Force Smash average output higher than 10secs? If so, you’re delaying it or your rotation is too slow. 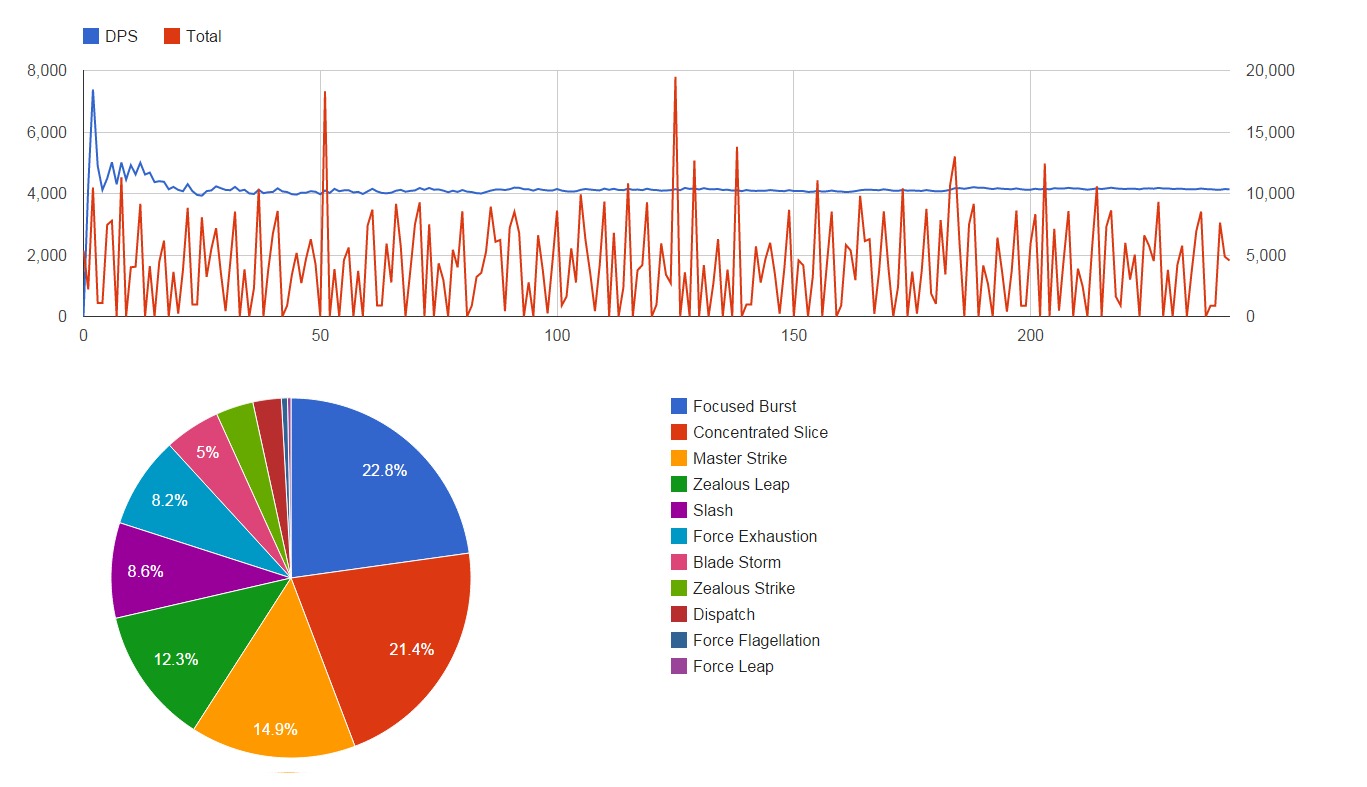 Video of the Fury/Concentration Rotation