The recent Dynamic Brawler’s Armor and Energized Triumvirate Armor from  Mid Rim’s Explorer Pack have animated effects that can be applied to any other armor via the outfit designer.

Disclaimer: Beware that this is likely caused by a bug and Bioware may fix it in later patches as the animation effects currently do not work in outfit designer slots. Hopefully when they fix the bug they don’t touch on this unintended side effect as well.

Both Dynamic Brawler and Energized Triumvirate Armor have animation effects localized to specific pieces that shows when you have drawn your weapon or are in combat. 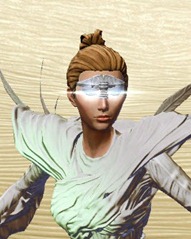 Now enjoy the animated effect on a headpiece/chest you like! 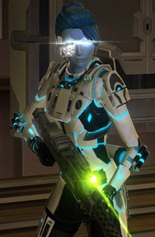 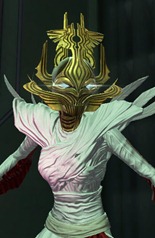 While you only need the Dynamic Brawler helm or the Energized Triumvirate Helm/Chest for the effect. It might be good to get the whole set to unlock for collections you don’t have to repurchase the pieces for each toon you want the animated effect on.

Special thanks to reader Steven Kucher for noticing this in the comment section!

Why do I fear this will be patched out? Can’t be having surprise fun here, that’s an extra CC unlock.

They better tell everyone now before people dump a ton of credits to buy the entire set and then CC to unlock them, “Or there’ll be hell to pay.”

Bioware reserves the rights to remove fun at any time. You all agreed to this when you agreed to the Terms of Service with this MMO ages ago. :/

Any Jim Gaffigan fans out there? All I here is his voice in my head saying “they better not!”

…Holy crap that is an impressive find. Bets on how fast prices are about to skyrocket for these things?

Neato, always wished they would’ve made those old glowing eye items from the old packs a timerless toggle, for now this will do, until they “fix” it :/

Yeah those glowing red eyes look AWESOME with the mask of Nihlius.

Pretty sure this will be fixed, but loks cool effect if it would be permanent for all armor

A separate effect slot would be nice. Like a dye slot.

That would be brilliant… and a great way to make crafting relevant again too.

Cool side effects of unintended and unimportant glitch that people actually like? Hotfix.

I sure dont see any lightning effects on the Energized Trimvirate chest or help when i draw my weapon or are in combat. Some special setting i have to set?

I *think* you need both the chest and helm to get the effect.

No. Look at the 3rd pic BOTH effects on one person.

Ah, you’re right. I didn’t see those last 4 photos. I also read the write up wrong on the bullet points. Probably shouldn’t use my phone to browse this site while I’m working…

What? Who uses their phone to read Dulfy when they are at work……

Each piece has a separate effect so it doesn’t matter if you’re missing one.

@Kaiser – Could it be some of your settings have disabled it?

Check if you have the “bloom” on in preferences. Idk if that matters just a suggestion.

Does it work in combat? I know technically you weapon is out but I’m wondering if it just works when you actually hit z/x (whatever one it is).

I got the glowing eyes one, and yes it works both when you just have your weapon drawn AND when you’re in combat

Sweet!! Cant wait to run around with my Sorc constantly surrounded my electricity!

Do you have to keep those armor pieces in your equipment slots for the animation to work, or can you remove them after stamping?

Gotta keep them in the equipment slot for it to work

As well you need to equip your mod/armor/enhancement to the Energized Triumvirate headpiece and or chestpiece, along with a new augmentation slot and whatever augment you want in there to have the same stats as you would with your original headpiece or chestpiece,

Thanks for the tip pretty neat, my biggest fear is that at this very moment those pieces will cost millions on the GTN 🙁

Trust me, they will be fixing this pretty fast seeing as this could hurt their sales business by releasing the same effect on different armor sets.

Too late I bet. Greed is faster than the speed of thought.

I see what you did there.

The bug isn’t working for me, has it been patched already?

BioWare fixing a bug that fast? Don’t believe that. But they will, because this bug is fun. And everything that’s fun will be kicked out of the game.

I just bought the complete set of Dynamic Brawler, in the “combo” boxes, for 650k total on Jedi Covenant. 🙂

Unfortunately, can’t seem to get the eye glow to work. Will keep working on it.

Update: This bug appears to be intermittent. I applied it to my lvl 60 Sniper and couldn’t get it to work, but it worked fine on my lvl 37 Sniper when originally applied on June 11th, but the next day it didn’t work on her at all. And on my Assassin it worked fine but on my Inquisitor all I got was a circular flash effect that went away when drawing my light saber.

Looks awesome when it works though. Hope they fix it so that it works this way all the time.

LOOKS DAMN COOL, PLEASE BIOWARE DONT FIX THIS. THIS IS ONE OF THE BEST THINGS THAT I HAD SEEN IN SWTOR AFTER THE REVAN SET.

Yeah. This game needs more armor with effects like these.

If you are lucky they are just incompetent and don’t know how to fix this. Or too lazy.
If we have bad luck they try to fix it and some random finished achievements are being set to 0.

This is an exploit!!!! I demand that all exploiters be BANNED AND GEAR BE TAKEN AWAAAAYYYYY!!!!!! *descends into incoherent gurgles*

Shut the fuck up. You might try to be funny here, but you’re being an asshole. This is in no way an exploit.

you must be fun at parties

i guess the “*descends into incoherent gurgles*” didn’t have enough sarcasm. SMH

That’s actually a good way to get people to buy new armor and choose between an active battle effect or BoL gear.

Yeah I used it in slot with the helm and it works just fine with all armor. Had to take away the Brawler helm cause it doesn’t look too good inside helmets. Too bad I really like it. In any case I really dig this. Makes armors look bad ass!

The energized chest was cheap earlier but is practically sold out now on Harbringer. The few left are going for 900k plus. I knew I should have picked them up this morning but was waiting to see the market tonight and tomorrow. /doh!

Sweet! Time to sell them them on the GTN before the bug gets fixed.

I stumbled onto this before work this morning…an electrified Freedon Nadd’s chestpiece is something to behold.

Please someone tell me! I just bought the Energised Tiumvirate chestpiece only and put it into the gear tab. Spent 700k on it too. Do I need the headpiece too?

Nope, only need the chest if you want the effect to show on the chestpiece

Nvm lads. All sorted just hoping it doesn’t get patched now because it looks great!!

The headpiece will just make the effect go higher up around the head as well.

The legacy gear’s mostly been copied/reskinned as other stuff. Look through the GTN and some comm stores and you’ll probably find whatever it is you’re looking for.

He means, that many people using BoL-gear as their main-armor (which is modded) to switch it between theit toons of the same class (Emperial and Republic), and this effect requare to use as modded armor this one haed-piece or chest-piece.

Yeah, I thought of that afterwards 😛

I spend a disgusting amount of creds ripping mods, anyway, so whatever. I can understand why other people would be annoyed by that, though.

Heh… for sure GreedyWare will “fix” it… by re-applying it as a separate slot that must be unlocked with CC.

It’s a bug. So obviously it will be “fixed”. That’s what they are supposed to do with bugs, lol.

Not a Bug but a feature.

I suggest they don’t fix this one and introduce other effects instead. Glowing red eyes and so on. They have a much larger market in using this “feature” to sell ugly as hell reskins only because of certain colored special effect.

Bioware fix bugs??? When did this start to happen

Bioware tries to fix bugs all the time. So stop complaining. No QQ.

Ahh classic keyboard warrior with no sense of humour..
Take Muscos cock our your mouth for 1 minute and have a laugh..

Keep forgetting Dulfy chat draws in the agro nerds..
“must scan comments so I can have a go at someones opinion to make my self worth seem important”

The Dynamic Brawler chest has an animation. The blue light on the center of the chest and on the backpack turns orange when your weapon is drawn. However, it was only visible on my Nimble Brawler’s chest (center of chest and backpack, but not hanging belt pieces). I don’t have any of the other reskins/recolors, but I assume it will work for them as well.

Ⓒⓛⓘⓒⓚ I agree that Joanne `s remark is astonishing, I just got themselves a Jaguar E-type after having made $4694 this – 4 weeks past and-more than, 10/k last munth . it’s realy the

easiest-work I have ever done . I actually started six months/ago and almost immediately started bringin home more than $69 per/hr .

You Can see THIS..

This would probably look sweet with some of the cybernetic pieces.

This would be great if Energized Triumvate was working on my toon at all.

Tried to draw your weapon when wearing it? 😉

Yes. This would be the definition of “not working”.

Yea, fixxed as of 3.2.2. it’s nice that they are on top of these cartel coin bugs and can’t seem to fix bugs that have plagued the game for over two years. I love this game, but sometimes…

YaY!!! Thanks for fixing the game and making it less interesting. 🙁

Damn. I remembered this, so when I was on the GTN today I saw the energized one was going really cheap, and bought it. Now I know why. grrrrr
I might still use it on my lightning guy.
Did anyone get banned for using this???

I used it for several weeks. Did not get banned.

Say this looks kind of cool. Why not make into a Aura slot or something?

Has this been removed? I cant seem to duplicate any more?

Thanks for info. Just another example of how I’ll never understand Bioware’s thought processes.

seriously… they had something that would encourage players to unlock more outfits and designer slots, there by making them more money in the long run… but it’s ok, they ‘fixed’ it 🙁 I was just about to make some outfits myself using this. glad I came here to check if it was still working first. thanks dulfy and slaytok for saving me credits and possibly coins :⌠