Bioware have leaked the details of the Fallen Empire Expansion early today by accident. Here are the details courtesy of LostStormTrooper and Nora.

A man can have anything… If he’s willing to sacrifice everything. Step into an epic story-driven adventure as your character becomes The Outlander, a veteran of the Great Galactic War. A third faction threatens the galaxy as we know it, and your choices will determine the fate of both the Sith Empire and Galactic Republic. Knights of the Fallen Empire includes the first nine chapters, fueled by BioWare-style cinematic storytelling, that kicks off a new player-driven story arc that puts you at the center of a conflict where your choices have impact on outcomes including unexpected twists and betrayals. Choose your path…join or betray companions, old and new…and shape the future of the entire galaxy as well as your own. Best of all, this is only the beginning…

THE ADVENTURE BEGINS ON OCTOBER 27TH, FREE FOR ALL SUBSCRIBERS! READY TO SACRIFICE EVERYTHING? SUBSCRIBE NOW! ALREADY A SUBSCRIBER OF STAR WARS: THE OLD REPUBULIC? GET REWARDS NOW

Continuous Storyline. Choices that matter. BioWare Storytelling. And MORE. CHOICES THAT MATTER Be at the center of a personal Star Wars™ story where choices matter and impact outcomes.

Prepare to Face your Destiny, be a subscriber on the dates below to earn rewards ingame at launch.

When you travel with Nico Okarr, the legendary gunslinger from SWTOR’s “Return” cinematic trailer, you can be sure that he will always have your back.

A stylish weapon set for the enthusiastic gunslinger; keep it for yourself or give it to your companion.

Impressive is the only world that describes Nico’s swashbuckling duster; you can be sure that wearing this duster sets you apart from other heroes.

Escape your enemies in epic style on your custom Star Wars Knights of the Old Republic inspired Swoop Bike.

Choose to be a Subscriber from July 31 to October 19 to receive the Early Access Bonus Reward! Be one of the first to jump in and get access to Knights of the Fallen Empire seven days prior to live launch.

All subscribers receive the advantage of the Epic Story XP Boost through October 19, 2015.

“Destiny is a lie”. Fate is the falsest of hopes. I am beyond prophecy. I forge my own path by making the difficult choices. Now, it is your turn.

I am not without mercy. Surrender and you may live. Stand against me, and I will turn you into a monument for fools who believe their victory is preordained. Choose wisely.

“I can make you powerful beyond reason.. If you will only kneel”

Everything until now has been the means to an end. I forged the Empire of Zakuul to surmount all of my previous works. It will span eternity.

Do not presume there are limits to my power. The Eternal Throne commands a fleet that will reshape the galaxy into any image I choose. Whatever you hope to achieve by opposing me, know that you will never succeed.

“I deemed you a worthy ally once. I hope I wasn’t wrong”

The Sith Empire and Galactic Republic have fallen. The Jedi and Sith have retreated to their temples. No one remains to stand between the Eternal Throne and the utter destruction of all we hold dear.

It has to be you. Find the strength within yourself to persevere and sacrifice your own needs for those of the galaxy. You’re our last hope.

“Rules are for people who lack the creativity to break them.” I have always been held back. All my life, my power has been restrained for fear of the chaos and bloodshed that I might inflict on a whim.

But our whims represent our truest selves. And now that my power is fully my own, I intend to be very truthful.

“We’re going to win this thing. I’m telling you, its destiny.” I grew up on Zakuul, served in the military. I know its potential for greatness, but all I see is the bleak reality of what it’s become.

Someone has to stand up to tyranny, right here and now. To make it clear that we reject this twisted vision for the galaxy. Someone has to own up to their destiny and fight.

“Even Emperors must answer to the law.” I have served with honor. I have upheld the law and pursued offenders to the far corners of the galaxy. And I have lost everyone I ever held close.

The worst among us now rule over us. Their laws will never bring justice to the monsters who betray our ideals and murder our children. But I will.

Declaration: Meatbag defense protocols engaged.” Lament: I am programmed for your maximum protection, but hostile meatbags continually demand I reactivate my termination subroutines.

Reassurance: I have no particular wish to harm the stupid meatbags. I was merely designed to be especially good at it.

Affirmation: Anything that threatens you will wish it had never existed, master.

Chapter 2 A Dream of Empire

Chapter 5 From the Grave

Terms and Conditions To qualify for the Knights of the Fallen Empire Subscriber Rewards, the account must be in a Subscriber status as of 11:59PM PDT//6:59AM GMT on the date listed by the reward. Knights of the Fallen Empire rewards are delivered through in-game mail and are redeemable as of the launch of the expansion upon login on October 27, 2015.

To qualify for the Early Access Bonus, you must have qualified for each of the four rewards by being a subscriber on each of the 4 listed reward dates. Once you qualify you may enter and play Knights of the Fallen Empire on October 20, 2015, seven (7) days prior to live launch on October 27, 2015.

*The Subscriber Epic Story XP Boost offers a significant enhancement of about 12x normal rate to the class story progression experience and includes: Increased commendations to support gear needs along the way Quick travel points unlocked as soon as they are revealed on the map Reduced cool down on quick travel options For questions on the Epic Story XP Boost visit: www.StarWarsTheOldRepublic.com/blog/epic-story-xp-boost

These images do not work but you can guess some of the upcoming location/content by the way they are named. Bothawui seems to be a new planet with mentions of a skyscraper city. Also mentions of Dual Faction. Courtesy of Xeta1 on reddit for linking them. 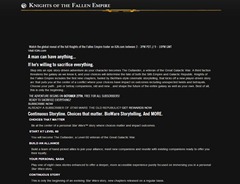 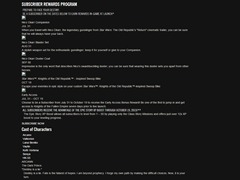 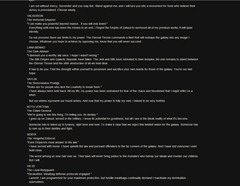