The first official post from Arenanet on the upcoming Guild Halls feature with Heart of Thorns.

Greetings from the guilds team! We’ve been hard at work putting together the guild halls system for you, and we’re thrilled to finally be able to share it. This is the first in a series of blog posts that will cover the different aspects of the system—and there are a lot—but for today we’re going to provide you with an overview. In this post, we’ll tell you about the guiding lights of the guild halls system and introduce the guild halls we’ll be adding inGuild Wars 2: Heart of Thorns™. 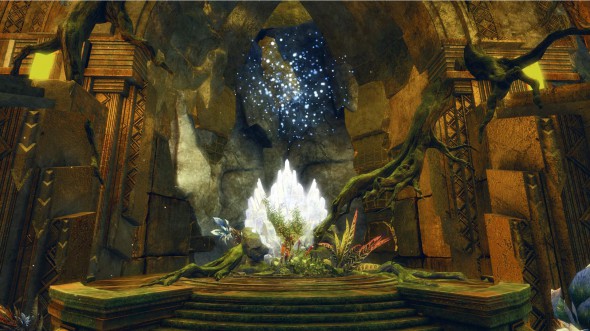 When we first began work on guild halls, we had a number of broad goals for the system, such as increasing the visibility of guilds within Guild Wars 2 and improving the overall experience for guild members. Over time, those goals have been refined into six pillars that lie at the heart of the system and inform our choices. They are: 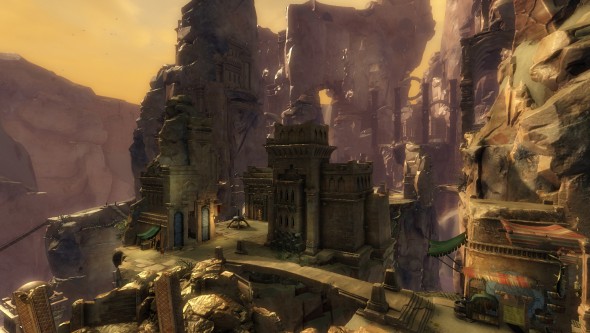 The new guild halls were once inhabited locations, hidden on the outskirts of the Maguuma Jungle—their original inhabitants long since gone. You’ll need to mount an expedition to find these locations and wrest control from the Mordrem currently infesting them. Once they are under your guild’s control, you can begin acquiring services for them and building them back up to their former glory.

We’ll be introducing two guild halls with the launch of Guild Wars 2: Heart of Thorns. The first is the Lost Precipice, a hidden canyon refuge on the border between the Maguuma Jungle and the wastelands to the north. Empty cliff dwellings dot the walls of the precipice, and rope bridges connect stone spires of dizzying heights. Who carved the dwellings, passages, and statues into the rock of this windswept retreat, and what happened to them?

Secreted beyond a lost golden city in the heart of the jungle, the second guild hall that players can explore and settle is the Gilded Hollow. This monolithic cavern contains the remnants of an outpost of that city, but why was such a grandiose space carved out in the first place, and why was it abandoned? The answers await those willing to brave its winding halls and the vast aquifer it’s built atop.

No matter which hall your guild decides on, we hope to send you on a grand adventure. In the next post in this series, we’ll discuss how guild halls fit into the lore ofGuild Wars 2: Heart of Thorns, as well as how your guild can actually claim one for its very own. Stay tuned!

°❋♢❋°. I just agree… Paula `s story is incredible… yesterday I got themselves a Lexus LS400 from having made $9785 this month and just a little over ten/k this past month . it’s certainly the nicest-job Ive ever had . I began this eight months/ago and pretty much straight away earned minimum $78 per-hr …

For more Information Open this liNK..

SMH….only when Duly’s site gets this many comments or traffic do stupid spam pop up. I believe that the poster upvoted themselves? Wow

Keep in mind that it is likely a bot, so responding to it is pointless 😉

Can bots upvote themselves? That’d be something

I guarantee if they release a “portal stone” to it it will be character bound and cost 500+ gems.

Its a button in the Guild tab afaik

where did they say no new dungeons? Just because it hasnt been discussed doesnt mean its not there.

Because Anet has already released their pre-order to HoT, most of the content (the huge in-game type playable content) should already be known by now. Why would I pay money to not know what I’m getting?

I guess by that logic there will be no thief elite spec. I mean, they haven’t told us about it yet, so it can’t possibly be real.

The information about how all classes have their elite trait specs is already known. We knew all classes were getting them.

but we dont know what we are getting!

I’m on the same side of the fence of being hesitant that I don’t want to pony up money because there’s not enough information as to what the expack will have. We all know all classes are getting elite specs. However, is that, one new profession, one elder dragon, possibly several maps (a map that has 3 layers too), and GH/GvsG worth $50? Mind you the GH/GvsG stuff should have been in the game from the get-go…it is called Guild Wars!

The price point and pre-order is out of the bag. Shouldn’t the content information be as well? This isn’t like I’m asking that the new map’s layout should be revealed or the exact dialogue of the storyline to be revealed.

Because they’re overcharging us for something that isn’t even finished yet and not telling us enough detail of what’s planned. They probably haven’t even finished making the other specs yet. It’s like one those early access zombie games on steam but at a far higher price and less info. 😛

You know the reason it will be release “When its ready” is because its still being worked on.

We all know that, and it makes the price tag worse.

Yes they have, they’ve told us it exists, even i they haven’t told us the details. Dungeons have not been mentioned at all. your logic is faulty.

At this point with Anet, you never know.

Damn, Revenant only getting 3 legendaries, and no elite? kinda sad.

I will buy because with what they announced so far i would regardless of what else they add. I mean…people spend 500 gems for glowy eyes…but do what is best for you…if your unsure the remaining content will make it worth it to you to buy, don’t yet. you will have lots of time to make up your mind 🙂

anet specifically said their main focus wasnt dungeons and they would not be adding new ones with the expansion they said this a while back.

Link it. The fractals are not a major focus of the expansion yet are still being touched.

They haven’t discussed giving us a gold brick each with the expansion so does that mean it could be in there? The assumption is if they haven’t mentioned things they aren’t in there, particularly as they’ve gone on record as saying all the major features have already been announced.

Its a reasonable assumption, which you apparently don’t understand. Its reasonable to assume they would put more of the content already in the game in the expansion, to expand it. Look at fractals, they are touching that for example. Please don’t use analogies if you don’t understand them.

No, it isn’t. Your assumption is the same as the land spears thing, baseless conjecture that runs contrary to the developer’s existing statements on the topic. Until they say there are new dungeons, you can’t assume that, the “challenging group content” is too vague to be considered evidence of upcoming dungeons, and given the vein the design of the game has been going (there have been major changes in staffing and design direction since launch) is more likely to be in the form of Vinewraith style world events.
But hey if you want to set yourself up for disappointment go ahead.

I think it looks pretty neat, but let the pessimism train arrive early and tell you how it sucks.

Haha, seriously, good job implementing guild halls 3 years into the game. The next expansion, in 2018, might have guild vs guild. HoT will come free with it.

itll be hard to fuck this up, but im sure someone is going to try.

realistically though i think itll be great.

your opinion is absolutely perfect.. on a website that developers don’t really bother to consider since there is a 57+++ pages of the same “booo nobody’s buying yo garbage” crap. and a few constructive comments. unfortunately you have not provided any useful comments outside of “QQ”ing all night long. I hope you aren’t losing sleep over this 🙂

yes. i am saying that out of all the “QQ” going on, your’s is outstandingly the most useless. everyone else at least have a point.

I made my points elsewhere (namely in the pre-purchase thread), and I do believe that devs bother to consider. There are not that many gw2-related websites / fansites out there.

Are you still here Raz? You’ve been at it all day.

Yes. Successfully spending 5 minutes of my time over 16 hours is my specialty.

Agreed, this is some shit “expansion” for $50

Because you know all it contains and can judge its worth, despite it already containing things people have wanted forever.

yay no poor people in gw2 anymore. be it garbage or not I will pay for it cause I got the cash to spend on random stuff I want

Translated: “mommy can I borrow your card?”

lol another handout kid who thinks thats how people get by in the world! I work for my money and I earn a lot of it so something like 100 dollars is nothing to me and to top it off I am living in a 3rd world country and I can still afford this game without having to worry about my finance

What an idiot. Get ripped off.

umm i dont find it garbage. that is ur perceptive. U find one time payemnt costly. there are other mmo games which cost u monthely and fill games with cheap content. previously ppl where crying about the expansions. And now they are crying its tooo costly. Go play ESO you might find cheap. oR play othere FREE mmo if you cant afford Gw2.

Are you retarded? I’m a gw2 player because clearly I spent 60$ on release. It was worth it. This thing? not so much.

if think you acting more retarded then me. But well there is place for everone in this world :p.

Yeah buddy, whatever goes in the little world inside your head.

Clearly someone is poor and doesnt know how the rich spend their money we but whatever we want cause it doesnt affect our financial status at `ALL. Thank god garbage poor people like you wont be in the game

Clearly you didn’t spend much in your education. Go back to school and learn how to elaborate coherent sentences.

Seems pretty exciting, but I wonder if guild halls can be swapped in the future if people get tired of it or just want a different look (or to have a different experience in GvG, if that gets included), similar to how you could swap GH’s in GW1.

EDIT: Never mind. I just read the livestream notes. Seems we can! 😀