The 4th blog post in the Gulld Halls series tackle some of the changes to the current guild structure players can expect to see.

Hi, I’m Link Hughes with the Guilds team, and welcome to the next blog in our guild hall series. As we sat down to work on guild halls, it became clear that this was a good opportunity to reevaluate the entire guild system in Guild Wars 2.

Moving upgrades from the disciplines into the buildings of the guild hall brought into question whether all of the upgrades made sense in the new progression, while influence served so many different purposes that it was creating some strange incentives. Further, we wanted to determine what overall quality-of-life improvements we could make to guilds outside the scope of guild hall specific features. In this post, we’re going to look at the answers we have for those questions and the reasons behind them. 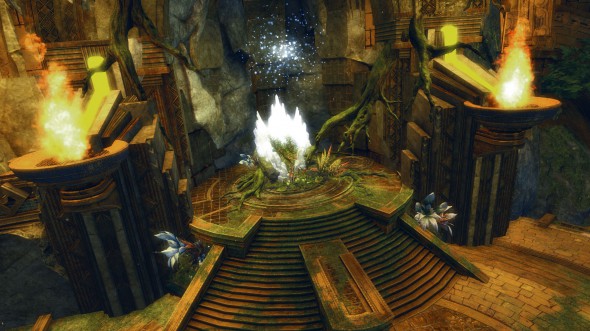 A Question of Upgrades

The introduction of guild halls and the switch from the disciplines to guild hall building progressions offered an opportunity for us to look critically at our existing upgrades. As a result, there are a number of upgrades that won’t be making the transition to the new system. Some, like guild mission upgrades and the various build queue improvements, didn’t make sense any more in light of the changes to systems that guild halls are bringing with them. You’ll learn more about the guild mission overhaul in the next post in this series.

Other upgrades ran counter to goals that we had in designing guild halls. One example is the remote crafting station consumables; we wanted to ensure that guild halls don’t make cities irrelevant, so we’re focusing on crafting for the eight existing disciplines in public maps. Another example is the guild emblem upgrade, which put an unnecessary barrier in the way of groups fully forming their in-game identity—and that’s something we very much want to encourage. Guild emblems will be freely available for all guilds to customize once the expansion launches.

The broad category of guild boosts—upgrades that give a benefit to guild members for a limited period of time—felt invisible and unengaging to the average guild member. We’re replacing these with permanent unlocks. Some, like the waypoint cost reduction, will apply permanently for all guild members without any need for interaction. Others, like the World vs. World fort enhancements, will apply permanently in the appropriate situation—the fort enhancements will always apply to the region of any WvW objective your guild claims as long as you hold the objective. Those attached to specific modes of play, such as the WXP or magic find boosters, are being replaced by a new guild-effects slot that functions like food and utility effects. Once your guild unlocks them, these effects will be available from a vendor in your tavern. Each guild member can only have one effect active at a time, but they’re free to swap and effectively never expire.

Any consumable upgrades your guild has purchased that fall into the categories being removed will need to be used before the launch of Guild Wars 2: Heart of Thorns™ or they will disappear. As we approach release, we’ll make sure to issue reminders so that guilds are aware of the impending change.

In the case of other upgrades that are moving to the new system relatively unchanged, such as the guild banners and the guild vault, we’ll be grandfathering access to those upgrades for any guild that unlocked them in the current system. If your guild had obtained the necessary research level and prerequisites to have consumables like banners or Vault Transport unlocked under the current system, you will have them unlocked to craft in the new system.

We also want to celebrate your progress through the disciplines. It takes a lot of time and effort to unlock research levels, and if your guild managed to research all 24, that is seriously impressive! When Guild Wars 2: Heart of Thorns goes live and the Guild Initiative opens its doors in Lion’s Arch, we’ll have a welcoming NPC just outside the building. Upon one of your guild leaders speaking with that NPC, your guild will receive an exclusive guild hall decoration to commemorate your progress through the disciplines. If you’ve unlocked at least one, you’ll get a basic version, but there will be improved versions for those who were one-third and two-thirds through the total progression, as well as a special version for those guilds that managed to unlock all 24 research levels. 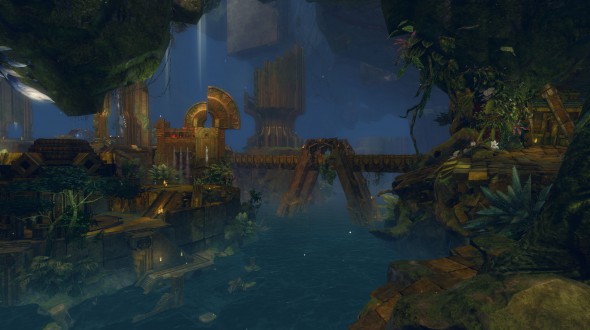 When we looked at influence, it became clear that it was trying to do too much. The currency is intended to reward you for playing together with your guild, but it can also be purchased for gold. Influence is used to build upgrades and consumables, but it can also be spent at a huge markup to immediately gain access to those things. Furthermore, influence gain is tied to guild representation, which is hard to keep track of outside of the guild panel. It is also earned passively just for being online, and this incentivizes guilds to require full-time representation from their members.

You’ll no longer be able to gain influence once the new system is live, but we respect that you’ve worked hard to accumulate your guild’s existing influence, so we’re going to offer you a few different ways to spend it. First, when we introduce the final version of the new Lion’s Arch to the game, we’ll raise the cap on all of the guild consumables that will be transferring to the new system to a maximum of 25. This new cap will persist into the new guild system, so feel free to stock up with excess influence right now.

Once you have access to the Guild Initiative Headquarters and your guild hall, we’ll allow you to spend influence to accelerate your initial progress in building up your guild hall in the following ways:

I want to emphasize that these uses for influence will only provide small, limited boosts to progress for guilds with existing stores of influence. We want to provide a useful way to spend that existing influence without unbalancing progression in the new system.

While we’re looking at influence, let’s talk briefly about merits. The primary function of merits was to gate the unlocking of guild missions, and once all of the mission types were unlocked, they could be used to build some of the higher-end guild consumables. This served to make running missions desirable even after a guild had unlocked everything, but merits were balanced in such a way that most guilds now have an excess of them. Since we’re removing barriers to running missions and favor serves the purpose of merits better than they previously did, we’ll be retiring merits once Guild Wars 2: Heart of Thorns goes live. 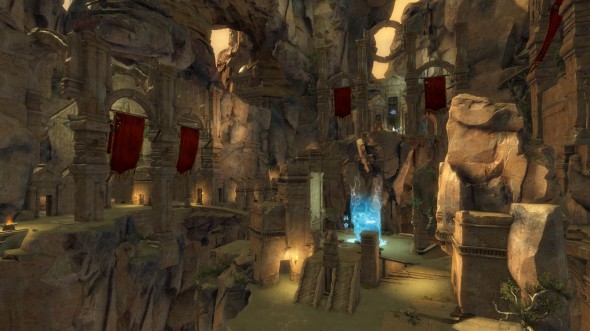 In the current guild system, there’s tension between being expected to represent a guild 100% of the time so that it can gain the benefits of your representation and having the freedom to use all five of your available guild memberships to socialize with different groups of friends. When we looked for overall improvements we could make to guilds, resolving this conflict stood out as having the greatest potentially positive impact on the social experience for guild members.

As of Guild Wars 2: Heart of Thorns, this will no longer be a problem; we’ll be introducing cross-guild chat. From your main guild panel, you’ll be able to assign which guilds you can chat to with new channels, /g1 through /g5. You can then decide which channels will be visible in your chat tabs. The existing guild chat channel, /g, will continue to chat to your currently represented guild.

Whew! That’s a lot of information to digest, but we’re only halfway through this series on new guild features! Keep your eyes peeled for the next post, where we’ll dig into the guild mission overhaul and how your guild will interact with missions in the future.

alliances here we come. love this about the guild chat. its my favorite thing.

So what happens to the personal banking guilds?

Why would anything happen? What are you expecting?

I think GW2 players without HOT will not have access to the guildhall, so there must be any way for them to access Bank and non-HOT-Upgrades