Guilds are the central component of socialization in Guild Wars 2. We try to provide a lot of flexibility around that system—you can join up to five guilds, guilds can become pretty large, and as a guild owner, you have full control over its ranks and associated permissions.

With all this flexibility, how can we have meaningful guild progression and ranking in Player vs. Player—a game mode consisting of five-man teams—when guilds vary greatly in size and diversity? Guild teams will provide the solution to this in Guild Wars 2: Heart of Thorns. 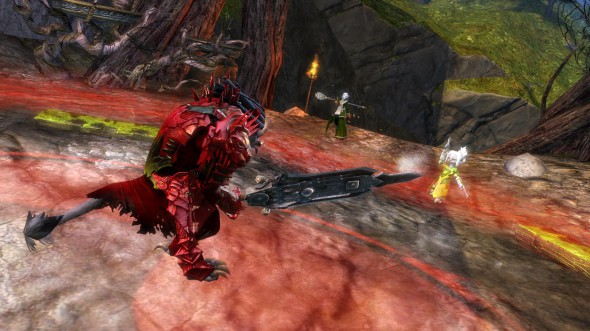 A PvP guild team is a named, five-player subset of your guild roster that fights together in structured PvP. It will have its own rating, and as such, its own place in a new guild-team leaderboard. Fighting as teams will help fuel your guild with the resources it needs to power its guild hall.

Creating and Managing a Guild Team

A guild member with the Teams Management permission—bestowed upon only the guild leader by default—can create a guild team at any time from the guild panel. Each team within a guild must have a unique name, which is chosen on creation. Once the guild team exists, guild members can be added to its roster. The ability to manage a team’s roster is given to any guild member with the Teams Management permission, as well as to the team captain. Each team may have only one captain.

Playing as a Team

When queueing for a PvP match in a party, and if queueing alongside at least two other members of that team, you’ll represent the guild team you’re a member of. That means you can have up to two substitutes and still play as a guild team. Playing as a team also offers a few perks that can be unlocked in your guild hall. For example, your guild anthem can play at the end of a match, should you be victorious.

Your guild team will have a rating specific to that team. While you’re playing as a guild team, matchmaking will use this rating over your personal rating. This provides a better indication of how you function as a group than a combination of individual ratings would.

By fighting under your guild team’s banner, you’ll help advance your team through the new guild-team leaderboard. In it, you can compare the performance of your team within your region and race for the top!

Guild teams are a platform feature. Our first focus for them is structured PvP, where we’re looking forward to finding out how they’ll be used and how we can improve them. We’re hoping to use the feature in other areas of Guild Wars 2 that would benefit from a more structured form of group play. Stay tuned for more!

I got excited for a bit, then i see “5 player team”

I reckon any more than 5 would just be too messy, not good from a competitive point of view

I agree especially when this game is going for the E-Sports. I mean, could you honestly imagine the commentator trying to keep track of 15 players per team at once? That’s gonna be quite a nightmare.

organizing a team of 8 people in gw1 could already be some pain. i guess the 20+ matches will be more the casual rambling or wvw blob fights. it will be a nice addition anyhow.

there was some talking about using the guild halls for some 20++ people matches. its written somewhere around here.

They said that 20 was the favorite number now, but they are still haven’t committed to that number yet.

15vs15 will happen in guild halls (or 20vs20, or whatever) 5 player teams, that’s for the leaderboards for now. So I’m assuming we’ll have a while still with gvgs being a unsupported mode until they decide otherwise but at least we will have a place to do them without having to wait for our turn in OS for hours. (And the ability to fight other guilds from other tiers!)

This looks great, however it shouldn’t have taken 3 years to produce! =[

I guessed they focused a bit more on the PvE side of things as we have seen so far. Sometimes there are obstacles that can hold a dev team back from making things in a timely fashion.

he says 3 years are long because other games does that in a very short time, and they also do way more than just living story as pve content.

The problem is not they focused o nsomething else, the problem is that 2 or 3 times in 2 years they took a breack because they couldn’t decide what to do with the game.

Nice, more premade in queues inc, until they bring back solo and team queues…