The 6th blog post in the Guild Halls series talks about Scribing and crafting in guild halls.

Hello again, friends. Link Hughes from the Guilds team here to talk about our new guild-focused crafting discipline, scribing, and how it contributes to creating guild items and decorations.

Scribes hold a uniquely selfless role within the guild community. Although there are items scribes can craft for themselves, they bend most of their talents to crafting items for their guilds. Much more than simple writers and notetakers, they are skilled in every aspect of composition, from mixing inks to bookbinding. They’re also able to inscribe complex magical diagrams and incantations that can harness raw aether to fabricate useful tools for your guild. 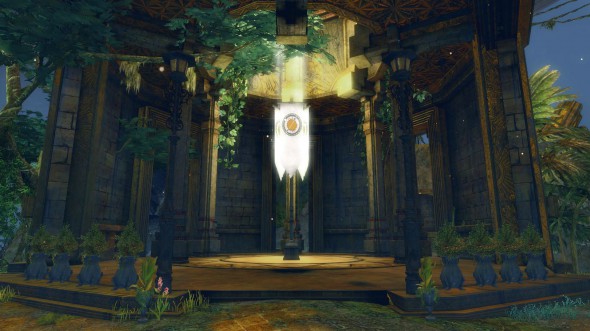 Each usable guild item has an associated schematic. When a scribe crafts that schematic, it’s placed into the guild’s aetheric assembly device and enters a queue to be assembled. Assembly works similarly to the existing build queues: when the duration of the assembly completes, the item will appear in the Items tab on the guild panel, from which it can be used.

If you absolutely need a guild item right away, you can shortcut the assembly process. Each guild hall’s assembly device has a resource called resonance that can be spent to turbocharge the process and immediately finish the current item.

The main source of resonance is a new item called a resonating shard, which is discovered while grouping with other guild members. When you find one, bring it to the assembly device attendant at your guild workshop. They’ll reward you with some loot and harvest the resonance from the shard, adding it to your guild’s pool of resonance.

Scribes can use your guild’s assembly device to fabricate three main categories of items: 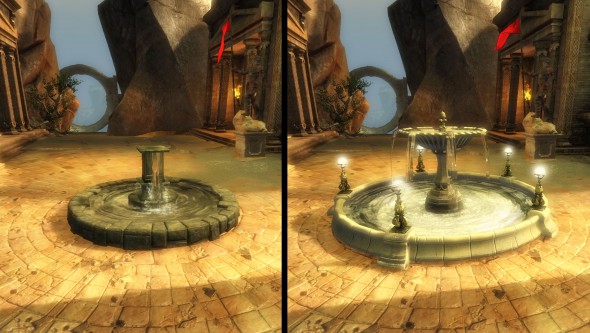 Decorations are items that you can use to customize the look of your guild hall. When you activate one from your guild panel, you’ll go into decoration mode, from which you can place any decoration your guild owns. You’ll see a temporary version of the decoration that you can rotate and place on most flat locations inside your hall. In this mode, you can also remove existing decorations.

Basic decorations can be purchased from a vendor in your guild hall, but catalyst materials found throughout the world can be used to transform one of the basic decorations into a special, finer version. For example, you’ll be able to obtain a Basic Stone Pool from the decorations vendor, but it’s a bit plain. High atop the Hidden Garden jumping puzzle in Mount Maelstrom, however, are a trio of air elementals that can drop an Essence of Illumination. Finding one of these essences will unlock a recipe that uses that essence to refine your Basic Stone Pool into an Illuminated Fountain—a much larger, lovelier tiled fountain ringed by softly glowing lanterns.

That’s the scoop on scribing and decorations! In the next post, we’ll take a look at upcoming improvements to the guild claiming system in WvW.

One reply on “GW2 Scribing and Crafting in Guild Halls”

Oh man. I’m going to be spending sooo much time prettying up my guild hall. XD