The newest GW2 Hidden Arcana series takes a look at the behind the scenes view of the new Lion’s Arch.

Hi, I’m Anatoli Ingram, and welcome to Hidden Arcana, where we’ll give you a look at some of the people and design philosophies behind the development of Guild Wars 2. The independent, semipiratical city of Lion’s Arch has seen years of attacks from minions of Zhaitan, giant enemy karka, and—most harrowing of all—Scarlet Briar. The latter seemed to be enough to bring the city to its knees, and its residents have spent a long time picking the pieces of their former lives out of the rubble. As of this week, the rebuilding is complete, and the difference is staggering! I got the chance to speak with Environment Art Team Lead Dave Beetlestone about the resurrection of Lion’s Arch.

Dave has been part of ArenaNet for twelve years and laid the foundations of old Lion’s Arch in the original Guild Wars®. The environment art team that he heads up is responsible for a huge amount of the items seen in the game—”from castles to candlesticks,” Dave said—and it’s important to them to have equality and diversity among the team members in order to create content from many different perspectives. Many of the current members worked on the originalGuild Wars as well, and they’re invested in showing that the lore of the past is important in the present.

The target of Scarlet Briar’s attacks had to be something that players had a strong emotional investment in across the board. Destroying a racial city would have less of an effect overall; Dave pointed out that if Scarlet had fired on Divinity’s Reach from the air, for example, the charr would likely have felt only slightly threatened since they already have strong fortifications and heavy artillery. Lion’s Arch, on the other hand, is important to everyone. Not only is it home to members of nearly every race, but the nations depend on it to facilitate trade and commerce.

With that in mind, the design of Lion’s Arch didn’t make sense given its role in the story, and Dave described it as a matchstick city, ready to go up in flames. As a major center of culture and commerce, it was a natural target for frequent attacks, but in its original incarnation it was unrealistic for it to withstand them for any length of time. In reinforcing Lion’s Arch’s walls, the environment art team realized they could also reinforce its importance to Tyria.

The original Lion’s Arch design didn’t serve the purpose of a social hub for players as well as it could have, either. Services were sprawled haphazardly across the city, and there were few places to gather freely. The layout also created a resource drain, so rebuilding presented a good opportunity to arrange or remove elements that significantly impacted performance. 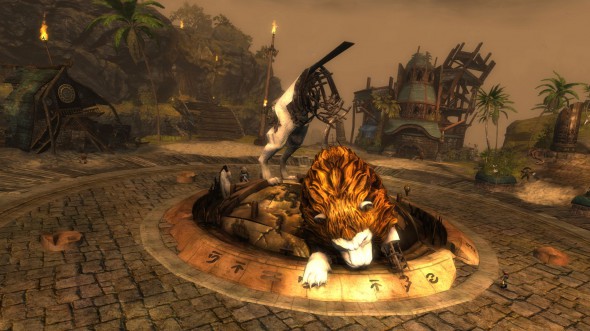 The new Lion’s Arch was created with easier navigation and accessibility in mind. Rather than scattering important locations around the map, thought was put into grouping them based on how players make use of them. The city retains much of its nautical-themed visual charm but with a more distinct purpose. As Dave pointed out, it makes far more sense to tell fellow players that they should head to the giant octopus or the jellyfish for various services rather than to direct them to points of interest or the nearest waypoint.

It’s not all about function. Open areas have also been added to help facilitate social events and role-playing, and there’s even a chapel for player-organized weddings. Rebuilding also gave the environment art team more opportunities to add fun details for players to find, none of which I’ll spoil!

I asked Dave how the redesign might affect official in-game holidays as well, and he explained that Halloween will remain in Lion’s Arch since it has strong roots in the city. However, Wintersday will continue to be celebrated in Divinity’s Reach, since it is a human holiday at its core. Events will take place where they fit best, rather than simply designating Lion’s Arch as the holiday hub.

Dave emphasized that he believes MMOs are about social play and relationships, and Lion’s Arch embodies that more than ever. It’s always been a melting pot and a symbol of the diversity of Tyria, but after weathering the trials of the past few years, the citizens of Lion’s Arch are happier than ever to call it home.

it’s easier to restart it on existing map, than redesign LA just for holiday. They are just lazy xD

Well…halloween will be in LA, so they ll have to redesign it somehow, lol.

It is a shame,because this new LA with snow would be amazing

well atleast they got an explaination for that but they should add different races holidays too . kinda feels like the humans are the center of everything right now

It would be nice to see each racial city get its own holiday. Meatoberfest in Black Citadel, some sort of spring equinox celebration in the Grove, have Rata Sum host Dragon Bash every year, come up with something for Hoelbrak…

technically they already have one, the one you see at the start of every norn’s story, which is explained as an annual holiday.
so just take that, and expand on it. blow it up to world-sized proportions, have us fighting world bosses instead of some wimpy worm thing

it sure would involve lots of ale and mead

“The new Lion’s Arch was created with easier navigation and accessibility in mind. Rather than scattering important locations around the map, thought was put into grouping them based on how players make use of them.”

I stopped here… the Black Lion trading post guy isn’t right next to all the crafting station.

Also I want to add, that finding “repeir msater” was hard to do for me. And I feel like I better switch to WvW and fix my items then go for it in LIon’s Arch.

So much is no further away from other things. I liked the crafting stations being about 2 dodges away from the mystic forge

Yeah not sure what the Anet staff thinks easier accessibility means, obviously not the same as what I think it means. Now instead of crafting stations, the trading post, armor repair and the Mystic Forge nicely grouped together, I have to run all over the place. AT LEAST, I can waypoint nearby to Guild storage now. And the merchant for trading dungeon tokens isn’t located nearby anything useful. I will continue to use my WvW borderland whenever possible for easily accessible services.

At least the town is really attractive looking now. I do, however, miss the Lion fountain.

All I want is the Ogden’s hammer dude back.

✜☯✔⁂✜⁂✔☯✜ you think John `s blog is flabbergasting… yesterday I bought a gorgeous Mitsubishi Evo since getting a cheque for $4484 this-past/4 weeks and-in excess of, 10/k last-month . with-out a doubt this is the easiest-job Ive ever had . I started this 8-months ago and almost immediately was bringin in more than $82, p/h .

You Can Look It Out This Link…..

One last thing to do: rename the city into Lobster’s Arch.

who doesn’t crave seafood. Its delicious. I want a lobster roll now..

It’s now a giant children’s sandbox, that petrified at some point and the children forgot their giant toys too! Hideous, clunky and artisticly totally out of place from the rest of filigree Tyria!

Scarlet come back and destroy it again!

I’m confused—a new city WITHOUT sewage!??? Did the council decree “no ‘dumping’ in city limits??
How, now, do the smuggler’s work?? And, what’s up with the Order of Whispers having a wide-open facility?? Why are they the only one’s with a (secret—-shhh) gate?