Telekinetics, one of the two Damage Per Second (DPS) Specs of the Sage advanced class, is the best viable option for PvE content if your raid needs a good sustained burst ranged DPS. Telekinetics is a very mobile spec compared to its Balance counterpart, we survive based off of our procs. That being said, we are a very high burst, sustained damage, and bring in useful buffs and abilities for the benefit of a group.

Listed Below are each utility and what they do. Following this list will be preferences for fights. 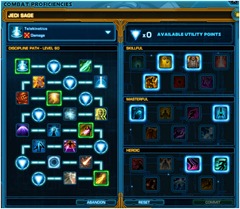 The next image is for fights which you encounter groups and AOE damage such as SM/HM Underlurker. (For HM Commanders change the point in Force Haste to Containment for Instant cast Force Lift in order to use on adds) 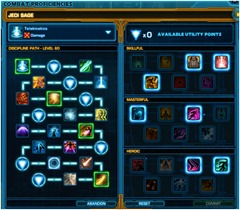 Being a Telekinetic Sage, we do not have issues in Force management. This being said, do not be afraid to help out the healers with using Force Armor, your Force will be able to expend itself to help your healers. (If you are grouped with a Sage Healer, coordinate if they will want Force Armor assistance ((you do not want to waste Force if it is not necessary))) 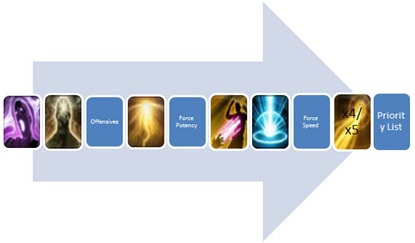 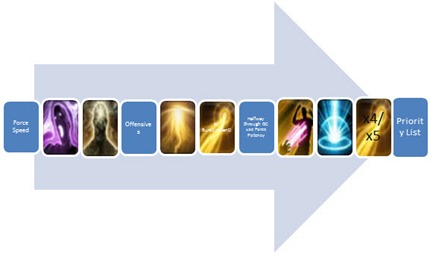 The difference between these two openers is the reliability, the Raid opener is more reliable based on internet connections and damage output. Using this Raid Opener, you will not have to worry about Turbulence using up a Force potency stack. Another benefit is the mobility offered by this opener by using Force Speed on cooldown before the pull starts.

Make sure to never let Weakened Mind fall off your target, if it does the first thing you should do is reapply it.

If you have Weakened Mind on a target you will keep Turbulence in your AoE Rotation, otherwise your two main AoE moves are TK Wave and Forcequake. (Use Forcequake on groups of 3 or more adds.)

Force Speed has two useful uses during a parse, the first is getting in one extra ability while having a relic proc and the second is getting in that extra attack during Mental Alacrity’s duration. (Mental Alacrity increase the proc chance on Telekinetic Momentum which will allow for Mental Alacrity to be used more often. During a raid you will find it more useful to use when you need to be/stay mobile, an example is during HM Sword Squadron after gravity, Quartermaster Bulo during Mass Barrage, Master/Blaster for moving locations (if you are not using the 2 Vanguard cheese method), etc) Force Speed is also useful to help with negating some pushback effects during raid wide damage. (For example, Underlurker and the core on HM Revan. With this situation it is a definite DPS gain.)

When using Force Potency it is best to use on Telekinetic Gust and Telekinetic Wave. Those two abilities are the two main you will want to increase Force Crit on since Turbulence will have an auto crit as long as Weakened Mind is on your target. You can also use Force Potency during your AoE Priority list if used with Forcequake > TK Wave.

Here is a screenshot (and badly cropped screenshot at that) of a parse using the above Opener and Priority List. (Pie Chart is using Maraauditore’s Parsely damage log) 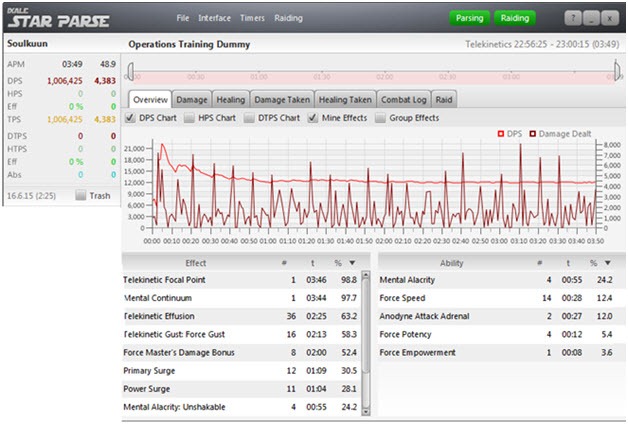 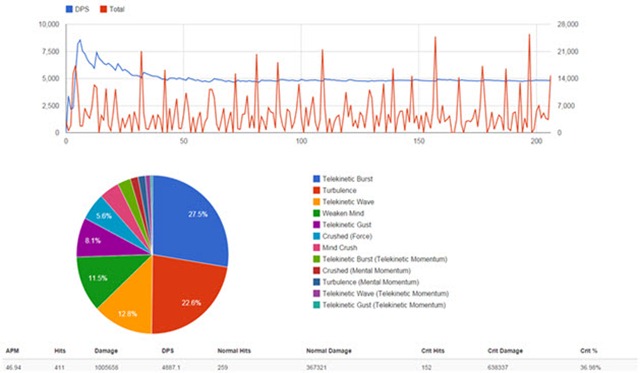 When parsing on my ship I do have a slight ability delay simply from my computer’s lag. However, as my predecessor has already stated, Ability per minute for dummy parses is dependent on how many times Force Speed is used. When you are in an actual raid, your ability per minute ratio varies wildly due to mechanics so please do not worry about ability per minute ratios during raids or even parsing. This being said, if you are properly using the priority list you are looked at minimum 47.5 APM or higher.

Hiya everyone! Well after reading this guide and the work I have put into it I would first like to say, I hope you learned something new about Telekinetic Sage and how we work as a DPS, along with the hope I was helpful in any way, shape, or form! But I am Soulkuun from Begeren Colony/Harbinger and I have been playing SWTOR for just about a year now. I have been a Sage through the entirety of my playtime and absolutely love the class. I am not just a Sage player though, I have a couple other classes I play but by far I find Sage/Sorc to be the most fun. I am the guildmaster of Galactic Lounge here on Begeren Colony/Harbinger. I am also a member of Rise and Fall on Harbinger as well.

I would like to state this guide is by far not just my own work, my predecessor KTap had a play in this guide as a basis for a lot of this information along with several other Sages I know from in game (Thank you Bora, Foccan, Maraauditore along with Foccan’s source). I am not the best Sage DPS and will never claim to be. I am here to simply share and learn along with everyone who reads this guide. I truly appreciate any and all constructive criticism to make this guide better, whether it be formatting, adding in new stats or updating the rotation to a better one.

And to kind of wrap this all up because I know we all want to get back to playing, I’ll make a note about PVP. I am a rather avid PVPer, however I do not PVP in Telekinetic; I am a Balance Sage in PVP based on personal preference and sustainability. While Telekinetic is amazing for a burst DPS, Balance just brings a whole new aspect to life steal and DoTs.

Alright, that’s enough from me! If you have anything you want to suggest, have me add, something to change, etcetera etcetera. Drop me a comment below or email me at SoulkuunBC@gmail.com. I would love to hear from everyone and I hope I was able to help in some way!